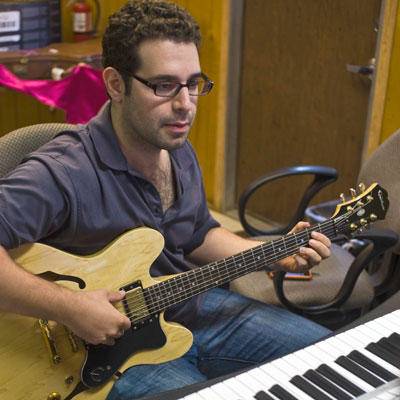 Los Angeles, CA — Sundance Institute today announced the four documentary film projects and composers that have been paired together for the tenth Composers + Documentary Lab, October 26 through November 1 at Sundance Resort in Sundance, Utah. The Lab is a joint initiative of the Institute’s Documentary Film Program and Fund (DFP) and Film Music Program.

Built upon the Sundance Institute Lab model launched in 1981 by Robert Redford, Fellows participate in an unique residential retreat focused on the role of music and sound design in documentary film. Four composers along with four documentary projects from a pool of over 100 active DFP-supported films were selected. Each composer is paired with a filmmaker to compose and record original music for a section of the work-in-progress film.  A team of award-winning filmmakers and composers participate as Advisors and work with Sundance Institute staff to guide the process and also screen and discuss their work. Advisors for the 2012 Lab are filmmakers Rob Epstein (Howl, Celluloid Closet), Vivien Hillgrove (In the Matter of Cha Jung Hee) and DFP Director Cara Mertes, as well as music editor Adam Smalley and composers Todd Boekelheide (Blessed is the Match), Miriam Cutler and Film Music Program Director Peter Golub (Wordplay, These Amazing Shadows).

Cara Mertes, Director of the DFP, said, “This Lab is unique in the world; through it we have seen the escalation of the use of original composition in cinematic documentary. During the week, we focus on familiarizing outstanding documentary directors with the potential of original music in their films. The composers commonly have established musical careers but have not composed for film, and documentary storytelling is uniquely suited to benefit from the attributes of an inspired musical score and soundscape.”

Peter Golub, Director of the Film Music Program, said, “Composers for documentaries face unique challenges yet there are few opportunities for them to work with documentarians and focus specifically on overcoming those obstacles. The Composers + Documentary Lab provides valuable hands-on experience composing for documentary film. More than that,  we hope it creates working relationships that will have practical applications throughout these artists’ careers.”

The four films and composers selected for the 2012 Sundance Institute Composers + Documentary Lab are:

Powerless (India)
Directors: Fahad Mustafa and Deepti Kakkar
In a city with 15 hour power outages, a nimble young electrician provides Robin Hood-style services to the poor. Meanwhile, the first female chief of the electricity utility company is on a mission to dismantle the illegal connections, for good.

Regarding Susan Sontag (U.S.)
Director: Nancy Kates
Regarding Susan Sontag tells the dramatic story of the late writer, activist, and public intellectual. It explores Sontag’s career, contrasts her courageous public persona with her closeted private life, examines her contributions to culture, and documents her views as a thinker and activist on war, terrorism, torture, and other contemporary issues.

Stargazing (Denmark)
Director: Berit Madsen
A young Muslim girl dreams of becoming an astronaut. But at her age the nightly stargazing excursions in the desert are a thorn in the side of family and traditions.

Composer: Damian Montano
Damian Montano enjoys a varied musical career as a composer and performer in Los Angeles. He has worked on diverse projects, ranging from composing orchestral commissions to writing and orchestrating for feature film and television. As a bassoonist, he is a member of the LA Chamber Orchestra and performs with ensembles such as the LA Philharmonic and LA Opera.

Filmmaker Johanna Hamilton continues her exploration of social movements and the limits of dissent, this time turning her lens to domestic contradictions in North America.

Composer: Larry Goldings
Larry Goldings is a Grammy-nominated pianist, keyboardist, composer, and arranger.  In addition to being recognized as one of the world’s top jazz organists, he composes songs for and with a growing list of singer-songwriters. He recently completed scoring his first feature film, Dealin’ With Idiots, written and directed by Jeff Garlin.