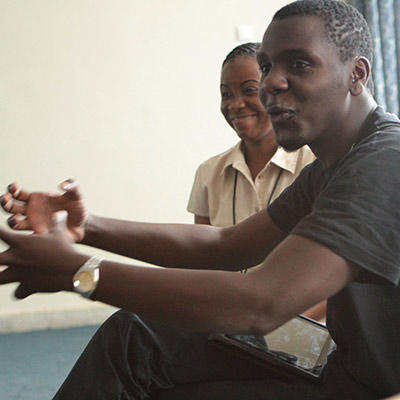 New York, NY — Sundance Institute today announced the artists and projects selected for its first Theatre Lab on Zanzibar, which concluded yesterday. The two-week exchange and development program (November 10-24) is part of the Sundance Institute East Africa initiative, now in its eleventh year, which is the only professional program on the continent that creates peer to peer mentorship and exposure opportunities between theatre artists in East Africa and the U.S. Under the supervision of Artistic Director Philip Himberg and Producing Director Christopher Hibma, the initiative is a core component of the Theatre Program’s year-round efforts. Deborah Asiimwe, Specialist-East Africa, and Roberta Levitow, Senior Program Associate-International and Co-Founder, Theatre Without Borders, co-led this initiative.

Keri Putnam, Executive Director of Sundance Institute, said, “Our East Africa initiative is rooted in the understanding that exchange opportunities for independent artists, though rare, promote the inclusiveness and diversity of story that ultimately serves to advance the field of theatre.”

Himberg said, “This is our third residency in the region. Two previous Labs were hosted on Manda Island, Kenya. Hosting our first Theatre Lab on Zanzibar, Tanzania, as part of our longstanding East Africa initiative allowed us to extend our unique and renowned model of creative support to artists in the region. We are grateful to our artists, both in East Africa and from the U.S., for contributing to an international conversation that enables us to better understand the role of the artist in our respective cultures.”

The creative teams and projects participating in the Theatre Lab on Zanzibar were:

Femme 1, Femme 2, Femme 3
By Samuel Sangwa (Rwanda)
Originally developed in a writing workshop in the Democratic Republic of Congo, Sangwa and his team of artists from the National University of Rwanda’s University Center for the Arts explore recovery from extreme violence with unexpected humor and theatricality. In four tableaux (scenes), the play captures a period of absurdity and schizophrenia when tragedy lodged in the heart of life and seeks to express the inexpressible. The story tells of one woman’s fragmented identity attempting to put herself back together, and by doing so, to create a bridge of identity between “the before and the after.” Using an Actor-Cameraman and screen onstage, the play cross-cuts between cinematic images of a struggling “telereality” contrasted with tasks of daily survival and the emotional poetry of characters’ inner thoughts.

The Butcher of Crawford
By Andia Kisia (Kenya)
The Butcher of Crawford is an oblique war play and begins with the encounter of two men (one a former soldier and one a young man of means) in a society at war. One in which most people go on about their lives, far from the sound and fury of young men and women on the war front. One young man, The Butcher, has been a soldier. The other man is a dilettante, clearly bright and opinionated, but unsettled. Through their charged interaction tinged with sexual overtones, the two explore the nature of war, violence, guilt and responsibility.

Strings
By Angella Emurwon (Uganda)
Strings plays with the different character responses to the 20-year absence and now return of Maama’s distant husband, Baaba, from Kyeyo, where he was seeking work and a better fortune abroad for the family left behind. Maama has created a family myth that helps her two children, Baaba, and her lover maintain normalcy. Uncle Lokil, brother to Baaba and on-again, off-again lover to Maama, seeks to regain his rightful place in Maama’s life that was usurped by his young brother during their teens.

An Iliad
By Lisa Peterson and Denis O’Hare
Adaptation and Translation into Amharic by Surafel W. Abebe (Ethiopia)
The actor/director team of Denis O’Hare and Lisa Peterson devised a solo adaptation of Homer’s epic war poem at the 2009 Sundance Institute Theatre Lab at the Sundance Resort, rediscovering its roots in the oral tradition and reimagining the form in which it may have been originally performed: as the partly recited, partly improvised efforts of a itinerant poet who walks into a local tavern and begins to weave a tale of war and woe, creating a conversation between the past and present, the fixed and the fluid, the teller and the listener. Ethiopian director Surafel Abebe will adapt and translate this production into Amharic for an Ethiopian audience.

Artists-in-Residence who received one week each of uninterrupted writing time during the Theatre Lab included Irene Sanga (Tanzania) and Asha Salimu Mshana.

Sundance Institute Theatre Program
The Theatre Program has been a core component of Sundance Institute since Robert Redford founded the Institute in 1981. The Theatre Program identifies and assists emerging theatre artists, contributes to the creative growth of established artists, and encourages and supports the development of new work for the stage. Under the guidance of Artistic Director Philip Himberg and Producing Director Christopher Hibma, the Theatre Program is one of the leading play development programs in the United States. Titles such as Spring Awakening, An Iliad, I Am My Own Wife, The Good Negro, Circle Mirror Transformation, Passing Strange, Grey Gardens, Crowns and Marie Antoinette have gone from Theatre Program Labs to production from coast to coast and internationally, garnering multiple Pulitzers, Tonys, OBIEs and other recognition. The Theatre Program’s East Africa initiative is the only professional program of its type on the continent, offering Labs, cross-cultural exchange, mentorship and exposure to artists in six African countries. The Theatre Program’s newest initiative is the Theatre Directors Retreat at Domaine de l’Armellière in Arles, France. sundance.org/theatre