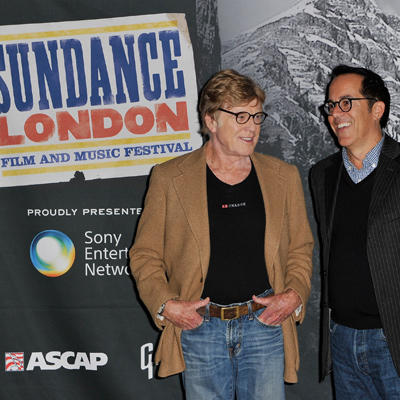 London, 30 April 2012 — The first-ever Sundance London film and music festival came to a close last night, capping off four days of film screenings and music performances hosted by Robert Redford, Sundance Enterprises, Sundance Institute and AEG Europe, with the support of Presenting Partner Sony Entertainment Network. The festival closed with an intimate performance by Rufus and Martha Wainwright following the World Premiere of Sing Me The Songs That Say I Love You ~ A Concert for Kate McGarrigle, Lian Lunson’s film about the music of their mother, folk singer Kate McGarrigle.

Robert Redford, President & Founder of Sundance Institute, said: “Sundance London marked our first time hosting an event in the UK, and we are grateful to all our supporters and collaborators for the reception we received. These four days have seen features, documentaries and live events with insightful filmmakers and musicians, as well as passionate audiences in attendance.”

Alex Hill, Chief Finance and Strategy Officer of AEG Europe, owner and operator of The O2, adds: “The feedback to our hosting Sundance London has been terrific. We set out to bring a slice of the Sundance Film Festival to London and if the audiences’ positive reaction is anything to go by, there’s obviously a real appetite for this kind of festival in the UK. The unique content of Sundance London, featuring a stunning film programme, amazing music performances and discussion panels, has brought new audiences to The O2 and allowed us to showcase the venue as a truly multi-purpose entertainment destination.”

Sundance London provided an array of film premieres, live music performances, discussions and panels with guest speakers. Opening the proceedings on 26 April, Robert Redford and 12-time Grammy Award winner T Bone Burnett led a fascinating discussion on the magical relationship between film and music. The two shared their recollections of achieving great musical moments with the many filmmakers, actors and musicians they’ve collaborated with throughout their storied careers. Nick Hornby moderated the event, which also featured performances from Guillemots and Glen Hansard.

Making their UK premieres at Sundance London were 14 fiction and documentary features as well as eight short films from the 2012 Sundance Film Festival in Park City, Utah, U.S.A. Those films included The Queen of Versailles by Lauren Greenfield, Liberal Arts by Josh Radnor, Chasing Ice by Jeff Orlowski, The House I Live In by Eugene Jarecki, Under African Skies by Joe Berlinger, and SHUT UP AND PLAY THE HITS by Dylan Southern and Will Lovelace.

The four Special Events at Sundance London were: an intimate performance by Rufus and Martha Wainwright following the world premiere of Sing Me The Songs That Say I Love You ~ A Concert for Kate McGarrigle; The debut theatrical screening of Coming Up For Air; a screening of the documentary HARMONY about the three decades of work by HRH The Prince of Wales to combat climate change and the global environmental crisis; and the 25th anniversary screening of River’s Edge, which first premiered at the 1987 Sundance Film Festival.

Music was featured prominently at the festival. In addition to showing several music-themed films, Friday night saw Tricky and Martina Topley-Bird reunite to perform the album Maxinquaye, and Placebo gave an electrifying performance to a sold-out crowd on Saturday night. Among the artists that performed in the festival’s Music Café at festival hub the Inc Club at The O2 were Beatrice Andersen and Seye.

Multiple panels on the creative process of independent filmmaking also took place at the festival, reflecting the year-round work of Sundance Institute. Events at the festival’s Cinema Café included guest speakers such Gina Rodriguez (Filly Brown), Sheldon Candis and producer Jason Michael Berman (LUV) in a relaxed and conversational setting. Also at the Cinema Café was a Table Read of FARMING, directed by Adewale Akinnuoye-Agbaje (GI Joe, The Bourne Identity, LOST,OZ) and with a cast that included Ashley Walters, Marc Warren, Minnie Driver and David Harewood.

All photos are copyrighted and may be used by press only for the purpose of one-time reproduction. Unauthorized use, alteration or reproduction of photographs is strictly prohibited.

Panels:
Documentary Flash Lab
Film Music from the Composer’s Point of View: an afternoon with Harry Gregson-Williams
Thinking Independently: UK versus US

Sony Entertainment Network are proud to be Presenting Partner of Sundance London. Sony Entertainment Network is the ultimate destination for digital music, movies, games, and more accessible across a wide array of connected devices through one convenient account. The service incorporates Video Unlimited, Music Unlimited and the PlayStation Network. Video Unlimited is a global premium digital video service with a growing library of over 80,000 of blockbuster movies and hit TV shows. It gives users convenient, single account access to great content across a wide variety of connected devices both in the home and on the go. Music Unlimitedis a global cloud-based, digital streaming music service that features an expanding catalogue of over 15 million songs. It gives music lovers convenient, single account access to great music on a wide variety of connected devices both in-home and on the go. www.sonyentertainmentnetwork.com