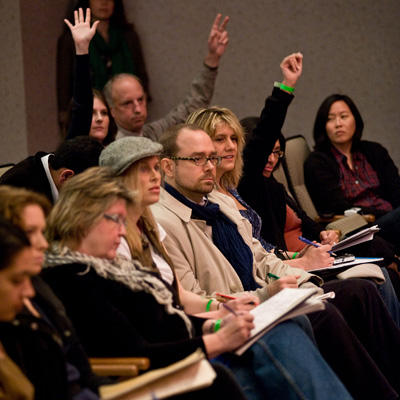 Los Angeles, CA — Sundance Institute is pleased to announce the schedule and featured participants for its first Comedy ShortsLab, a one-day symposium focused on the craft of comedic short-form filmmaking and exhibition. The Comedy ShortsLab will be Saturday, August 6 at Cinefamily@The Silent Movie Theatre, 611 N. Fairfax Avenue in Los Angeles. Tickets are $200 and can be purchased at www.sundance.org/shortslab.

Sundance Institute ShortsLabs are an opportunity for filmmakers to gain insight and inspiration from leaders in the field, who will dissect the art of short-form storytelling. Each ShortsLab features a full day of panels, discussions and screenings with a wide-ranging mix of filmmakers and industry professionals. The event concludes with a networking reception for all attendees and participants. Following the ShortsLab, filmmakers can stay connected with the Institute community through a monthly email with job opportunities, crew needs and links to recommended shorts.

“At Sundance Institute, we’ve long believed in the power of short films, and many filmmakers have launched their careers with shorts at our Sundance Film Festival,” said Keri Putnam, Executive Director of Sundance Institute. “Our ShortsLabs and other one-day workshops give emerging filmmakers a chance to connect with one another and experts to help them build practical knowledge and hone their skills.”

“Making a comedic short film that works can be a truly challenging experience. You have limited time to make people laugh, so every second counts,” said Trevor Groth, Director of Programming for the Sundance Film Festival. “But when it’s done right it can become a global sensation. This Comedy ShortsLab features participants who have harnessed that power and who will enlighten those hopeful of doing the same.”

Recognizing the important role short films have and will continue to have in cinema, storytelling and culture Sundance Institute hosted its first-ever ShortsLab in the summer of 2010, in Los Angeles. The sold-out event received positive feedback from attendees and participants, and the series was expanded to Chicago and New York this year.

Creating Comedy
From creating a comedic premise to finding what works for an audience, a discussion around the discovery and development of the comedic voice. Moderator: Scott Aukerman (‘Comedy Bang Bang Podcast’, Producer of ‘Between Two Ferns’). Panelists will include: Julie Delpy (2 Days in Paris), Ruben Fleischer (Zombieland) and others to be announced soon.

Performance Enhancement
A conversation about the sometimes turbulent but always vital relationship between actors and directors. From rehearsals and blocking, to improv and timing, we look at what works best and what doesn’t work at all. Moderator: Miguel Arteta (Cedar Rapids, The Good Girl). Panelists will include: Bobcat Goldthwait (World’s Greatest Dad), Lake Bell (Childrens Hospital, How To Make It In America) and others to be announced soon.

Funny or Die: Creating Hit Online Comedy
Join the creative, production and marketing team from Funny or Die as they walk us through the creation process for the funniest web videos online today. Topics will cover all facets of the company, including writing, directing, producing, distributing and marketing, with case studies on specific videos that illustrate how it all comes together.

Since its inception four years ago, Funny Or Die has emerged as an award-winning, top destination for comedy on the web. With hundreds of exclusive celebrity videos and a steady stream of huge viral hits, Funny or Die has become the “place to be seen” for comedic celebrities, and the obvious destination for a daily comedy fix. The site averages over 12 million unique users per month and over 40 million video views per month.

From Short Script to Short Film
A roundtable conversation with the team that has created several opening montage films for the Academy Awards, including Troy Miller (Mr. Show, Flight of the Conchords) and his veteran short-form collaborators, who will share insights into creating comedy through timing, structure and creative production technique. From the first paragraph to the final edit, Miller and his team will discuss their relationship to the beats and rhythms best suited to create laughs and how best to capture them.

Make ‘em Laugh: Signature Styles Connecting to Ideal Audiences
Presentations from filmmakers who have created a loyal fan base with their distinctive short films. They’ll share the path they forged to finding their voice and their audience. Filmmakers will include: Derrick Comedy (Mystery Team), The Zellner Bros (Goliath) and Derek Waters (Drunk History).

Cocktail and Networking Reception
The Comedy ShortsLab will close with an informal gathering and a chance for attendees to network with panelists, festival programmers and each other.

The Sundance Institute ShortsLab program is supported by a grant from The James Irvine Foundation.