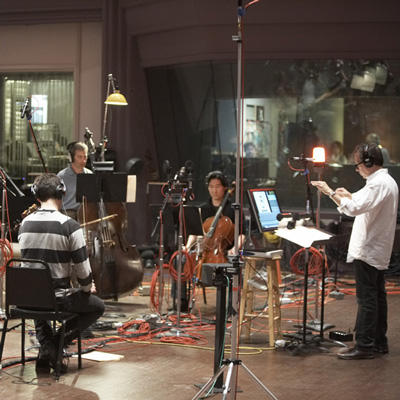 Los Angeles, CA — Sundance Institute and Skywalker Sound today announced the independent directors and composers selected for one of two Sundance Institute Music and Sound Design Labs at Skywalker Sound. This will be the second year the Music and Sound Design Labs take place at the Skywalker Ranch in northern California. This is one of 10 residential Labs hosted by Sundance Institute this summer, collectively representing 15 weeks of residency support and mentorship for the most promising new independent film and theatre projects and artists from the United States and around the world.

Keri Putnam, Executive Director of Sundance Institute, said, “Our Film Music Program, now in its 15th year, has established itself as both a leader and resource for experimenting with music in film and advancing stories through musical scores. Support for music composers is critical to the independent film community, and we continue to advance the ways we help these artists grow.”

Josh Lowden, General Manager of Skywalker Sound said, “Collaborating with the Institute to host these Labs at Skywalker allows us to deepen our commitment to independent filmmaking. Twenty-five years ago Skywalker was founded by a filmmaker for filmmakers, and among our core philosophies is the importance of early collaboration between directors, sound designers and composers in bringing a story and vision to life.”

Peter Golub, Director of the Sundance Institute Film Music Program, said, “We are thrilled to be returning to Skywalker Ranch, with a new slate of fellows poised to broaden their skills and deepen their understanding of film music. They will have a unique opportunity to work with emerging independent filmmakers and accomplished sound designers. Likewise our filmmakers deepen their insight into how music and sound, together, can enhance the impact of storytelling.”

In addition to the Sundance Music and Sound Design Labs, the Institute offers labs throughout the year and around the world for independent directors, screenwriters, documentary editors, composers, playwrights, producers and New Frontier artists.

Filmmakers:
All filmmakers selected for this Lab have been supported by the Sundance Institute Feature Film Program. This is the first year that two projects are coming to the Lab in the post-production phase. The other projects recently participated in the Institute’s June Directors and Screenwriters Lab.

Nikole Beckwith (writer/director) / Stockholm, Pennsylvania (U.S.A): A young woman is returned home to her biological parents after 17 years with her abductor. As she struggles to adapt not only to the world around her, but the life she is meant to have missed, her mother discovers she must work harder than ever to get her daughter back. (Starring Saoirse Ronan and Cynthia Nixon) POST-PRODUCTION

Chloe Zhao (writer/director) / Songs My Brothers Taught Me (U.S.A): Songs My Brothers Taught Me explores the unique world of South Dakota’s Pine Ridge Indian Reservation through the eyes of Jashaun, a young spirited Lakota girl, whose faith in her family and community is tested when her brother Johnny threatens to leave the only place they’ve ever known. POST-PRODUCTION

Gabriela Amaral Almeida (writer/director) / The Father’s Shadow (Brazil): A nine-year-old girl with strange powers and an obsession with horror films attempts to bring her mother back from the dead as a means of connecting with her sick father.

Jordana Spiro (co-writer/director) and Angelica Nwandu (co-writer) / Night Comes On (U.S.A.): Angel is released from juvenile hall on her 18th birthday with a single focus: shoot the man who killed her mother.

Oorlagh George (writer/director) / Stranger with a Camera (U.S.A. / Northern Ireland): In this dramatic thriller, an American girl is stranded in a remote village in Northern Ireland after her father is arrested on a 20-year-old murder charge tied to the IRA. Compelled by her father’s secrecy, she sets out to uncover the mysterious family history that he has kept hidden from her.

Daniel Kwan (co-writer/co-director) / Swiss Army Man (U.S.A.): In this absurdist comedy, a hopeless man stranded in the wilderness befriends a dead body and together they go on a journey to get home.

Timo Chen has a musical background rooted in both strict tradition and radical experimentation. He has worked on music for films and TV shows as a musician, sound designer, engineer, songwriter, and composer. He has also been the composer/music director for awards shows such as the Emmys and the People’s Choice Awards. He is a graduate of the Oberlin Conservatory of Music with additional studies at the Colburn School and Musicians Institute.

KT Tunstall is a Grammy-nominated singer-songwriter from Scotland. Her multi-million-selling debut 2004 album, Eye to the Telescope cemented an international career, in part due to her live performances and loop pedal work. She has penned songs for films such as Winters Tale (2014), and Million Dollar Arm (2014), working alongside legendary Indian composer, AR Rahman. Tunstall released her 4th studio album to critical acclaim in 2012.

Josh Moshier is a composer and pianist from Chicago. His scores for films, independent television pilots and webseries include Shrink (dir. Ted Tremper) and Running Buddies (dir. Micah Gardner). Josh has performed and recorded with Marquis Hill, Mike Lebrun and Milton Suggs, and is currently based in Los Angeles where he works for composer Alex Wurman. He is a graduate of the Northwestern University Bienen School of Music.

Katy Jarzebowski is a composer and vocalist currently based in New York. Having scored numerous independent films and documentaries – most recently The Pakistan Four – she has also composed concert music that explores her Slavic roots for such ensembles as the JACK Quartet. Katy’s accomplishments include the NYU Elmer Bernstein Award, ASCAP Film Scoring Fellowship, a Masters in Music degree from NYU and two BA’s from Yale University.

Pianist/composer and Guggenheim Fellow Ryan Cohan has worked with numerous jazz icons and has released five critically acclaimed CD’s of original music. He has toured five continents, and his arrangements from solo piano to symphony orchestra have been recorded by Ramsey Lewis, Joe Locke and Otis Clay among other notable artists.