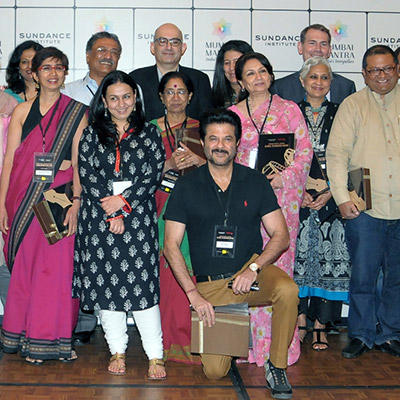 At the Lab, Screenwriting Fellows will engage in an artistically demanding process that offers indispensable lessons in craft, a fresh perspective on their work and a platform to fully realize their material. Screenwriting Fellows will have the opportunity to work intensely on their feature film scripts in an environment that encourages innovation and creative risk-taking, with the support of a distinguished group of established Screenwriters and Directors serving as Creative Advisors.

Rohit Khattar, Chairman, Mumbai Mantra, said, “We are at an exciting storytelling stage in the history of Independent Cinema in India. With the help of our exceptional collaborator, Sundance Institute, we are keen to recognize, nurture and hone talent in India and across the world. We welcome to the Lab the nine remarkably talented Screenwriters and Directors who are sparing their valuable time to guide the Screenwriting Fellows. We congratulate the eight Screenwriting Fellows selected for the second Mumbai Mantra | Sundance Institute Screenwriters Lab and look forward to their next films with great anticipation. I thank the Advisory Committee members for so generously giving back to the Indian Film Industry by reading innumerable screenplays in order to arrive at this shortlist.”

Michelle Satter, Founding Director of the Sundance Institute Feature Film Program, and Paul Federbush, International Director, Feature Film Program, said, “Sundance Institute and Mumbai Mantra share a commitment to supporting the growth of independent artists in India, and we look forward with excitement to our second Screenwriters Lab together. We are grateful to the accomplished screenwriters who are bringing their expertise and generosity to the Lab as Creative Advisors and the very talented group of Indian screenwriters who have been selected for the Lab.”

Mumbai Mantra received over 500 applications for the Lab from Indian screenwriters across the globe. After intense debate and deliberation and consultation with the Sundance Institute, the final eight projects were decided.

Now in its third year, the award has proved to be a vital platform for some of the most promising international filmmakers. In the past year, three former award winners wrapped production on their projects – Bogdan Mustata’s Wolf (Romania), Seng Tat Liew’s In What City Does It Live (Malaysia), and Tayla Lavie’s Zero Motivation (Israel) – with several others poised to begin production this year.

The life of a small town music teacher takes a sharp turn when one of his ex-students, now estranged, a big celebrity in the far-away city today, is slated to visit the town after many years. The teacher, now lovelorn, prepares to meet her not knowing if she still bears the same feelings about him as she did those many years back.

With a Bachelor’s degree in Engineering, a Master’s degree in Business Management, and five years in the corporate world of Mumbai, Sarthak Dasgupta realized life needed a different definition than the one he was living. Sarthak left his cushy job and set out to become a filmmaker. His debut feature The Great Indian Butterfly has screened at various international film festivals.

A struggling journalist chances upon a scandalous story which has the potential to rock the world of showbiz.

Black Freedom is a collection of five short stories woven in one film. It is dedicated to the memory of Saadat Hasan Manto. It’s about his dream of a sub-continent where people will still live as people, irrespective of religion, caste or color, where hatred shall stand abolished, where religion shall only ennoble those who follow it, not divide them into warring tribes. Sixty-five years after independence, Manto’s dream remains a dream…

The 5 short stories of Manto  that the film is  inspired from are Toba Tek Singh, Khol Do, Tetwaal Ka Kutta, Sharifan and The  Last Salute.

After gaining experience as an assistant director for various Hindi movies, Nitin Kakkar made his directorial debut with the award-winning short film, Black Freedom (2004). Since then, he has worked on a number of television projects including Prayaschit, Jersey No 10, and CID. Nitin’s debut feature film Filmistaan received a Special Jury Mention during its World Premiere at the Busan International Film Festival. Thefilm also won Nitin the Best Debut Director at the International Film Festival of Kerala and Jaipur film Festival

A story about six people and their manic missions…six specs of dust crisscross paths, ready to raise a storm in the endless city of Mumbai.

With the release of the first home video camcorder, a teenage Sikh boy and a squatter Punk girl become unlikely friends and filmmaking collaborators as London sits on the brink of race riots and a youth uprising in the summer of 1976.

Terrie Samundra grew up between a rural village in India, a small farming town in Missouri, and the California coast. She is the director of the award-winning short ﬁlms Kunjo and A Short Tale of Xuanand is co-writer of Pooja’s Honor, the ﬁrst screenplay in The Ballad of Pooja trilogy. She is a Princess Grace Award recipient, a National Geographic All Roads Seed Grant recipient, and is currently the Head Programmer at the 2013 Indian Film Festival of Los Angeles.

The film Tribhanga is a story of three women, from the same family, of three different generations. The lives of these three women overlap each other’s like concentric circles… each determining the shape of the other… each contributing to the other’s life in a very deep manner… each becoming the other’s strength in key times in their life. Their lives are like ‘Tribhanga’, the Odissi dance pose that is so disjointed, yet so beautiful, magical and mesmerising.

Renuka Shahane has been an actress in Indian theatre, television and film for the past 25 years. Her work in television includes Lifeline, Surabhi, Circus, Imtihaan, Sailaab, Close-up Antakshari, Kora Kaagaz and the celebrity dance competition Jhalak Dikhla Jaa. In her film work, she is best known for the Bollywood blockbuster Hum Aapke Hain Kaun? Her first feature as director was the critically acclaimed Rita for which she won Best director for a Marathi film at the 16th Nokia Star-Screen Awards 2010. She also received the Best Screenplay Award in Marathi Films competitive section of the 8th Pune International Film Festival.

Television is a story about three men – Vijay, who is about to get married and start a new life; Ravi, who wants best for his 3-year old son and must decide between his principals and the ways of world; and Malik, who is now retired and wants to live a peaceful life.

Unforeseen circumstances have put these three men at crossroads. They must decide what path to choose.

Kavanjit Singh is a screenwriter and director from Pune, India. Kavan started his film career at Whistling Woods, graduating in Film Direction. A former Infosys Project Manager with an undergraduate degree in electronics engineering, Kavan is pursuing his passion for cinema.
His short film Jagjeet has won nine Best Short Film Awards across the world.

Amidst the socio political unrest of 1987 in Kerala, a rebellious daughter from an upper caste family and her impressionable young niece set into motion a series of events that lead to betrayal and a dramatic death. 16 years on, with the patriarch on his deathbed, the disintegrated family is forced to come together, re-visit their past and find forgiveness.

After studying Philosophy at Lady Shri Ram College and film at the National Institute of Design, Neha Sinha has worked as a documentary filmmaker and as art director at the advertising firm JWT. She has also been a creative assistant to adman Ram Madhvani on various commercials, including the Cannes Lions 2007-winning ‘Palace’ for Happydent White, and assisted Abhinay Deo on Aamir Khan Production’s acclaimed film Delhi Belly. Currently, she works with Siddharth Basu in Big Synergy where she develops content and fiction based TV shows. Forgiven is her first original screenplay.

Mumbai Mantra Media Ltd
Mumbai Mantra Media Ltd, the Media & Entertainment vertical of the Mahindra Group, is actively evaluating opportunities in content and infrastructure in the domestic as well as international media and entertainment space. Mumbai Mantra’s ‘Antaheen’, won 4 National Awards including Best Feature Film in 2009. It has also co-produced the film adaptation of Shakespeare’s ‘The Tempest‘ directed by Julie Taymor. Several other films are in development.

Mumbai Mantra has also made a commitment towards providing a platform for independent voices in Indian cinema to champion an emerging generation of exciting film makers. The first step in this direction is the forging of a partnership with the renowned Sundance Institute founded by Robert Redford, for the establishment of the Mumbai Mantra | Sundance Institute Screenwriters Lab which is planned to be an annual event in India, and the Sundance Institute | Mahindra Global Filmmaking Award to be awarded to 4 international film makers annually at Park City.www.mumbaimantra.com

Mahindra & Mahindra
Mahindra embarked on its journey in 1945 by assembling the Willys Jeep in India and is now a US $14.4 billion Indian multinational. It employs over 1,44,000 people across the globe and enjoys a leadership position in utility vehicles, tractors and information technology, with a significant and growing presence in financial services, tourism, infrastructure development, trade logistics and, recently, the entertainment industry.

The Mahindra Group has a long standing commitment to the arts and humanities. The Mahindra Excellence in Theatre Awards (META) were created to encourage both emerging and established theatre and celebrated its Sixth Anniversary in 2011. The Group’s encouragement and support to world music will be at its fore at the second annual Mahindra Blues Festival in Mumbai in February 2012 – the largest festival of its kind in Asia, showcasing the best international Blues artists and providing a common platform for emerging Indian Blues bands.

To encourage and support the ‘young and the unknown’ and to give back to the communities it operates in, has been the core of the Mahindra Group’s involvement in art and culture. www.mahindra.com

Sundance Institute Feature Film Program
Since 1981, the Sundance Institute Feature Film Program (FFP) has supported more than 600 independent filmmakers whose distinctive, singular work has engaged audiences worldwide. The program’s approach to the discovery and development of independent artists has become a model for creative development programs internationally. Program staff fully embraces the unique vision of each filmmaker, encouraging a rigorous creative process with a focus on original and deeply personal storytelling. Each year, up to 30 emerging filmmakers from the U.S. and around the world participate in a year-round continuum of support which can include the Screenwriters and Directors Labs, Composers Lab, Creative Producing Fellowship and Lab, Creative Producing Summit, a Work-in-Progress Screening Initiative, a Screenplay Reading Series, the Feature Film Program Fund, offering direct financial support through named grants, awards, and artist fellowships, the Artist Services program, a new initiative providing strategic resources for crowd funding and digital distribution, and ongoing creative and strategic advice. In 2011, the FFP created the New Frontier Story Lab, supporting innovative artists developing projects across multiple platforms, emphasizing the convergence of storytelling and technology.