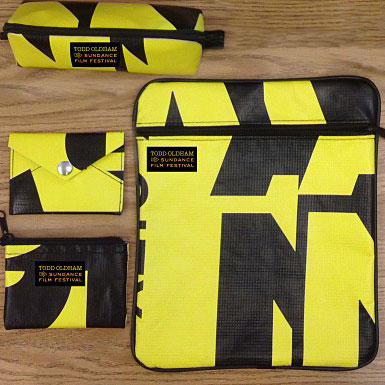 All Items Available December 17 at www.sundance.org/store

Among the items featured are a line of ‘Todd Oldham for the Sundance Film Festival’ recycled bags and wallets, as well as accessories and apparel. Many products incorporate repurposed materials, such as messenger bags made from street banners and notebooks made from previous years’ Festival film guides. Artists confirmed to contribute designs for a special collection of ‘Sundance Film Festival Editions’ items including totes, buttons, patches and t-shirts include Lauren Greenfield, Mike Mills, Shirin Neshat, Stacy Peralta, Parker Posey, Susan Sarandon, Amy Sedaris, Morgan Spurlock, John Waters and Mike White.

Oldham said, “I find independent film to be endlessly inspiring, and the Sundance Film Festival has provided a platform for many of the most creative and prolific films and filmmakers of the past three decades. It is my pleasure that the bag collection, made from recycled banners from prior Sundance Film Festivals, helps to raise funds for Sundance Institute, an amazing organization that protects and supports the future of original storytelling.”

Keri Putnam, Executive Director of Sundance Institute, said, “Sundance Institute is known for supporting and collaborating with artists of great vision, and Todd Oldham is one such artist. We are honored that he has brought his signature style to our products, and we look forward to seeing these designs on the streets – and in the theatres – at our Festival.”

All items will be available beginning December 17 at www.sundance.org/store and the Festival’s merchandise stores in Park City, Utah (for locations and hours of operation visit http://www.sundance.org/festival/film-events/store-info/). Quantities are limited.

The 2013 Sundance Film Festival will be January 17 through 27 in Park City, Salt Lake City, Ogden and Sundance, Utah. For more information visit www.sundance.org/festival.

The Sundance Film Festival
A program of the non-profit Sundance Institute, the Festival has introduced global audiences to some of the most ground-breaking films of the past two decades, including sex, lies, and videotape, Maria Full of Grace, The Cove, Hedwig and the Angry Inch, An Inconvenient Truth, Precious, Trouble the Water, and Napoleon Dynamite, and through its New Frontier initiative, has showcased the cinematic works of media artists including Isaac Julien, Doug Aitken, Pierre Huyghe, Jennifer Steinkamp, and Matthew Barney. The 2013 Sundance Film Festival sponsors to date include: Presenting Sponsors – HP, Acura, Sundance Channel and Chase Sapphire PreferredSM; Leadership Sponsors – DIRECTV, Entertainment Weekly, Focus Forward, a partnership between GE and CINELAN, Southwest Airlines and Sprint; Sustaining Sponsors – Canada Goose, FilterForGood®, a partnership between Brita® and Nalgene®, Hilton HHonors and Waldorf Astoria Hotels & Resorts, Intel Corporation, L’Oréal Paris, Stella Artois® and Time Warner Inc. Sundance Institute recognizes critical support from the Utah Governor’s Office of Economic Development, and the State of Utah as Festival Host State. The support of these organizations will defray costs associated with the 10-day Festival and the nonprofit Sundance Institute’s year-round programs for independent film and theatre artists. www.sundance.org/festival

Sundance Institute
Sundance Institute is a global nonprofit organization founded by Robert Redford in 1981. Through its artistic development programs for directors, screenwriters, producers, composers and playwrights, the Institute seeks to discover and support independent film and theatre artists from the United States and around the world, and to introduce audiences to their new work. The Institute promotes independent storytelling to inform, inspire, and unite diverse populations around the globe. Internationally recognized for its annual Sundance Film Festival, Sundance Institute has nurtured such projects as Born into Brothels, Trouble the Water, Son of Babylon, Amreeka, An Inconvenient Truth,Spring Awakening, I Am My Own Wife, Light in the Piazza and Angels in America. Join Sundance Institute on Facebook, Twitter and YouTube.