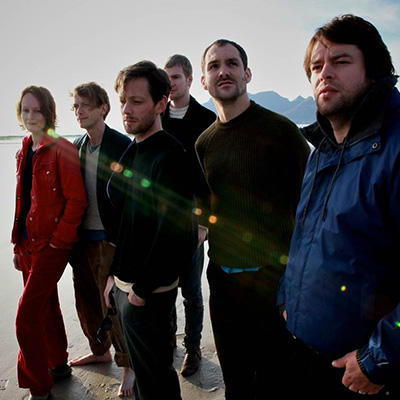 The O2, 4 April 2013 — Sundance Institute and The O2 can reveal that British Sea Power will perform on Sunday 28 April, the closing night of the second Sundance London film and music festival. Live on stage in indigO2 in The O2, British Sea Power will perform their original score composed for From the Sea to the Land Beyond. The band will be playing live to a screening of the film. Tickets will be on sale from 9:00 a.m. GMT on Friday 5 April online.

From the Sea to the Land Beyond, by award-winning director Penny Woolcock, is a lyrical portrait of Britain’s coastline, created through an exquisite combination of evocative archive footage drawn from the BFI National Archive and stirring music. British Sea Power set the course for this cinematic voyage with an original score that ebbs and flows with the natural sounds of seagulls, ships and snippets of speech to create a deeply compelling and uniquely uplifting film experience. When From the Sea to the Land Beyond was originally shown on BBC4 under the Storyville banner a Twitter-storm resulted in viewing figures twice the norm for this slot. The film is nominated for three Televisual Bulldog Awards.

British Sea Power are a six-piece band variously originating from Cumbria, Yorkshire, Ealing and Shropshire and are currently based in East Sussex and on the Isle Of Skye. Ten years on from their debut album, their latest album Machineries of Joy, out now on Rough Trade Records, is a creative high, a superbly composed, multi-stylistic tour de force.

British Sea Power commented, “It’s an honour to be playing at Sundance London. We’re really pleased with the way this film worked out – it was great working with Penny Woolcock. The film has taken us on an incredible journey and this is a rare opportunity to perform live with the film.”

The second Sundance London will take place from 25-28 April, 2013, and host the international and UK premieres of American independent films fresh from the 2013 Sundance Film Festival in Park City, Utah, U.S.A., as well as live music performances, panels and events. Sundance Institute, which annually presents the Sundance Film Festival, selected the films and related programming. Film and panel tickets are now on sale.

In addition to the performance by British Sea Power, Sundance London will host previously announced performances by Peaches on Friday 26 April and Gregg Allman and John Paul White of The Civil Wars on Saturday 27 April. Tickets for those performances are now on sale.