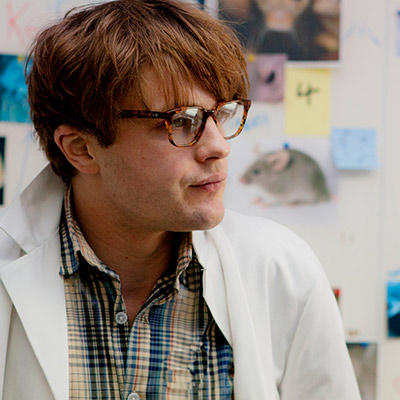 These activities, as well as a panel at the Festival and the Alfred P. Sloan Commissioning Grant, are part of the Sundance Institute Science-in-Film Initiative, which is made possible by a grant from the Alfred P. Sloan Foundation. The initiative supports the development and exhibition of new independent film projects that explore science and technology themes or that depict scientists, engineers and mathematicians in engaging and innovative ways.

“We are delighted to collaborate with Sundance Institute for the 11th year in a row and to recognize Mike Cahill’s original and compelling I Origins as the winner of this year’s Alfred P. Sloan Feature Film Prize,” said Doron Weber, Vice President, Programs at the Alfred P. Sloan Foundation. “With Academy Award-nominated films like this year’s Gravity and Her, I Origins—as well as new scripts we are developing with Sundance Institute Labs such as The Buried Life and Prodigal Summer—demonstrates that not only are science and technology central to understanding, engaging with and dramatizing modern life, but they also make for cracking good films that draw large audiences.”

Keri Putnam, Executive Director of Sundance Institute, said, “Independent filmmakers offer unique perspectives on the role math, science and technology play in our world and culture. The Sundance Institute Science-in-Film Initiative, with critical support from the Alfred P. Sloan Foundation, recognizes and encourages these projects as they make their way to audiences.”

I Origins, directed and written by Mike Cahill, has been awarded the 2014 Alfred P. Sloan Feature Film Prize and will receive a $20,000 cash award by the Alfred P. Sloan Foundation at this year’s Sundance Film Festival. The Prize is selected by a jury of film and science professionals and presented to outstanding feature films focusing on science or technology as a theme, or depicting a scientist, engineer or mathematician as a major character.

In I Origins, a molecular biologist and his lab partner uncover startling evidence that could fundamentally change society as we know it and cause them to question their once-certain beliefs in science and spirituality. The cast includesMichael Pitt, Brit Marling, Astrid Bergès-Frisbey, Steven Yeun, Archie Panjabi. The jury presented the award to the film for its “intelligent and nuanced portrayal of molecular biologists as central characters, and for dramatizing the power of the scientific process to explore fundamental questions about the human condition.”

Dr. Kevin Hand
Dr. Kevin Hand is deputy chief scientist for Solar System Exploration at NASA’s Jet Propulsion Laboratory. His research focuses on the origin, evolution, and distribution of life in the solar system. His fieldwork involves exploring some of Earth’s most extreme environments from the McMurdo Dry Valleys of Antarctica, to the depths of the Earth’s oceans, to the glaciers of Kilimanjaro.

Flora Lichtman
Flora Lichtman is a science journalist living in New York. She has worked as a video journalist for the New York Times and National Public Radio’s Science Friday and writes regularly for Popular Science magazine. She is the coauthor of Annoying: The Science of What Bugs Us.

Max Mayer
Max Mayer is a founder and producing director of New York Stage and Film and has directed over 50 new plays by writers such as John Patrick Shanley, Lee Blessing, and Eric Overmyer. In addition to writing and directing Better Living and Adam, which premiered at the 2009 Sundance Film Festival and won the Sloan Prize, Mayer has directed As Cool as I Am and episodes of The West Wing, Alias, and Family Law and written three produced plays.

Jon Spaihts
Jon Spaihts is the screenwriter of The Darkest Hour, Ridley Scott’s Prometheus, and the upcoming Passengers and The Mummy. The one-time physics student and science writer continues to specialize in science fiction.

Jill Tarter
Astronomer Jill Tarter, the Bernard M. Oliver Chair for the SETI Institute, has devoted her career to hunting for signs of sentient beings elsewhere. The lead for Project Phoenix, a decade-long SETI scrutiny of about 750 nearby star systems, she now leads SETI’s efforts to build and operate the Allen Telescope Array. A 2009 TED prize recipient, she is also the real-life researcher upon whom the Jodie Foster character in Contact is largely based.

The Buried Life (U.S.A.)
Joan Stein Schimke and Averie Storck (co-writers/co-directors)
An archaeologist risks her reputation for the dig of her career, but when her rock ‘n’ roll sister and overbearing father follow her to the excavation, she discovers her biggest challenge is facing what’s above ground.

Joan Stein Schimke was nominated for an Academy Award® for her short film One Day Crossing, which won several other awards including the Directors Guild of America (DGA) Best Woman Student Filmmaker, Best Director, National Board of Review and the Student Academy Award® Gold Medal. Other directing credits include Law and Order and the short film Solidarity, which screened at over a dozen festivals including the New York Film Festival. Stein Schimke is an MFA graduate of Columbia University’s Film Program and is currently an Associate Professor at Adelphi University in New York.

Averie Storck is an MFA graduate of Columbia University’s Film Program. Her award-winning short films include Live at Five , which won the New Line Cinema Development Award and screened at more than 30 international film festivals. Prior to filmmaking, Storck worked for People and Vogue magazines, was a writer for Who Wants to Be a Millionaire, and studied improv at the Upright Citizens Brigade Theatre in NYC. She currently teaches and directs at the Savannah College of Art and Design.

Alfred P. Sloan Foundation
Founded in 1934, the Alfred P. Sloan Foundation is a non-profit philanthropy that makes grants in science, technology and economic performance. This Sloan-Sundance partnership forms part of a broader national program by the Alfred P. Sloan Foundation to stimulate leading artists in film, television, and theater; to create more realistic and compelling stories about science and technology; and to challenge existing stereotypes about scientists, engineers, and mathematicians in the popular imagination. Over the past decade, the Foundation has partnered with some of the top film schools in the country – including AFI, Carnegie Mellon, Columbia, NYU, UCLA, and USC – and established annual awards in screenwriting and film production and an annual first-feature award for alumni. The Foundation has also started an annual Sloan Feature Film Prize at the Hamptons International Film Festival and initiated new screenwriting and film production workshops at the Hamptons and Tribeca Film Festival and with Film Independent. As more finished films emerge from this developmental pipeline—four features were completed in 2013, with half a dozen more on deck—the foundation has also partnered with the Coolidge Corner Theater and the Arthouse Convergence to screen science films in up to 40 theaters nationwide. The Foundation also has an active theater program and commissions over a dozen science plays each year from the Ensemble Studio Theater, Manhattan Theatre Club and Playwright Horizons.