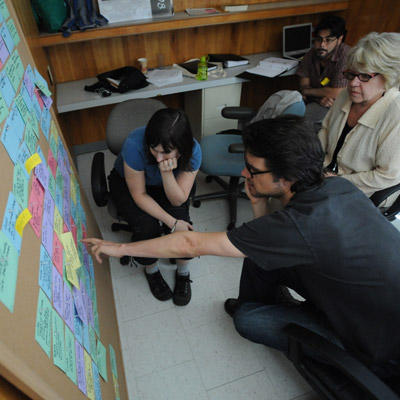 Los Angeles, CA — Sundance Institute today announced the 29 feature-length documentary films that will receive $582,000 in grants from the Documentary Film Program, including two films selected to receive grants from the Cinereach Project at Sundance Institute and one Time Warner Foundation Fellow. The DFP celebrates its 10th anniversary in 2012 and since its inception has awarded grants to more than 300 documentary filmmakers in 61 countries.

“For many of these filmmakers, receiving a grant will be just the beginning of our relationship with them,” said Cara Mertes, Director of the Sundance Institute Documentary Film Program. “These filmmakers are also eligible for year-round creative support through our programs, including Creative Labs, Work-in-Progress screenings, and events and activities at the Sundance Creative Producing Summit and Sundance Film Festival. We welcome these filmmakers to our community and look forward to working with them to further support and develop their unique visions.”

Awarding grants is a core activity of Sundance Institute’s Documentary Film Program, which provides year-round creative support to nonfiction filmmakers globally. Proposals are accepted twice a year, and submissions are reviewed by a jury of creative film professionals and human rights experts, based on their approach to storytelling, artistic treatment and innovation, subject relevance and potential for social engagement. Visit www.sundance.org/documentary beginning in January for more information about the Spring 2012 round of funding from the DFP.

DEVELOPMENT
The Bill (U.S. / Philippines)
Director: Ramona Diaz
A political firestorm hits the Philippines when “The Bill,” a reproductive health bill that could legalize birth control in the world’s 12th most populous nation, pits tradition against reform and brings the culture war into the streets and churches.

Dirty Wars: The World is a Battlefield (U.S.)
Director: Richard Rowley
Reporting from the battlefields of the war on terror, journalist Jeremy Scahill investigates the wars waged by and against an empire, and constructs a global picture of asymmetric warfare today.

The Mouse That Roared (U.S. / Iceland)
Director: Judith Ehrlich
A great struggle for free speech in the 21st century will be fought online, and the first volley has been fired in Iceland. This film follows Birgitta Jónsdóttir, trailblazing Icelandic Parliamentarian and former WikiLeaks leader, as she takes us inside the global fight for internet freedom.

The New Black (U.S.)
Director: Yoruba Richen
The New Black is a documentary that uncovers the complicated and often combative histories of the African-American and gay civil-rights movements.

A Whole Lott More (U.S.)
Director: Victor Buhler
Lott Industries, outside of Detroit, employs more than 1200 workers, all with developmental disabilities. For decades the workers excelled at assembling car parts. However, the decline of the auto industry has pushed this unique workplace to the brink of survival.

Cooked (U.S.)
Director: Judith Helfand
Cooked is a story about extreme heat, poverty and the politics of “disaster”; Whoever gets to declare “disaster” also gets to determine when it started, when it’s over and how to fix it.

Escape Fire: The Fight to Rescue American Healthcare (U.S.)
Directors: Matthew Heineman and Susan Froemke
Escape Fire exposes the perverse nature of American healthcare, contrasting the powerful forces opposing change with the creative solutions and compelling stories of pioneering leaders and the patients they seek to help. The film is about finding a way out, and about saving the health of a nation.

These Birds Walk (U.S. / Pakistan)
Directors: Omar Mullick and Bassam Tariq
A portrait of contemporary Pakistan is created through the eyes of an ambulance driver and a runaway boy who call a humanitarian and his mission based organization home.

Gideon’s Army (U.S.)
Director: Dawn Porter
In the deepest South a group of dedicated lawyers is determined to find a way to represent the poor. But with large caseloads, long hours, low pay and harsh sentences can they honor their intentions?

Gulabi  (India / Norway)
Director: Nishtha Jain
In Bundelkhand, India, a revolution is in the making among the poorest of the poor, as Sampat Pal and the fiery women of her Gulabi Gang empower themselves and take up the fight against gender violence, caste oppression and widespread corruption.

The History Of The Universe As Told By Wonder Woman(U.S.)
Director: Kristy Guevara-Flanagan
Through the fascinating journey of the beloved superhero, Wonder Woman, the film explores the evolution of heroic women in American pop culture from the birth of the comic book in the 1940s, to TV action heroes of the 60s and 70s, and, finally, the big screen blockbusters of today.

How To Survive a Plague (U.S.)
Director: David France
Highlighting a small group of activists that exploded into a mass social movement over a 10-year period, How to Survive a Plague uncovers the little known story of how AIDS stopped being a death sentence.

Invisible War (U.S.)
Director: Kirby Dick
The Invisible War is an investigative and powerfully emotional documentary about the under-reported epidemic of sexual assault in our U.S. military, and its startling and profound personal and social consequences.

Let The Fire Burn (U.S.)
Director: Jason Osder
Philadelphia, 1985: tensions between the radical African American group MOVE and the city police spiral out of control, resulting in a fire that claims eleven lives and destroys sixty-one homes in a forgotten national tragedy that still resonates today.

Nuclear Underground (U.S.)
Directors: Peter Galison and Robb Moss
How can humankind dispose of and live with nuclear waste, a material that remains dangerous for a period as far into the future as we are from the Ice Age?

Noces Rouges (Red Wedding) (Cambodia)
Directors: Lida Chan and Guillaume P. Suon
Between 1975 and 1979, at least 250,000 women were forced into marriages by the Khmer Rouge. Noces Rouges (Red Wedding) is the story of one of its victims, Pen Sochan, who pits her humanity against an ideology and a system designed to annihilate people like her.
Strong Island (U.S.)
Director: Yance Ford
Set in the suburbs of the black middle class, Strong Island chronicles the director’s investigation into her brother’s violent death twenty years ago.

Untitled: 1971 (U.S.)
Director: Johanna Hamilton
Filmmaker Johanna Hamilton continues her exploration of social movements and the limits of dissent, this time turning her lens to domestic contradictions in North America.

Who Is Dayani Cristal? (U.K./ Mexico)
Director: Marc Silver
A man is found dead at the U.S. / Mexico border. An investigation uncovers a tale of family and faith, discovered by tracing his body’s only identifying feature; a tattoo reading “Dayani Cristal”.

Crime After Crime (U.S.)
Director: Yoav Potash
Two attorneys fight for the freedom of Deborah Peagler, 20 years into her life sentence for the murder of the man who abused her. The audience engagement campaign will partner with policy makers, legislative organizations, and legal education groups to inform other states about the successful California law allowing incarcerated survivors of domestic violence to petition for their freedom.

Gasland (U.S.)
Director: Josh Fox
It is happening all across America; rural landowners wake up one day to find a lucrative offer from an energy company wanting to lease their property. Reason? The company hopes to tap into a reservoir dubbed the “Saudi Arabia of natural gas.” The audience engagement award will support Fox’s ongoing effort to educate potentially vulnerable communities to the dangers of fracking; inspire political engagement around unregulated drilling; and bring together state and local grassroots efforts nationwide.

Our School (Romania / U.S.)
Director: Mona Nicoara
Shot over four years, Our School follows three Roma children in a small Transylvanian town who are among the pioneer participants in an initiative to integrate the ethnically segregated Romanian schools. The audience engagement award will support targeted screenings in the Human Rights community internationally, as well mobilize new energies at a moment that is ripe for change, when Europe has its own Brown vs. Board of Education moment.

Semper Fi: Always Faithful (U.S.)
Directors: Rachel Libert and Tony Hardmon
When Master Sgt. Jerry Ensminger’s young daughter dies from a rare type of leukemia, his search for the cause leads him to the shocking discovery of one of the largest water contaminations in U.S. history. The audience engagement award will support the effort to help notify families who may be affected by contaminated water on military bases, and help support screenings for legislators interested in health care for affected veterans.

The Kill Team (U.S.)
Director: Dan Krauss
The Kill Team tellsthe story of an American soldier who attempted to thwart U.S. war crimes even more heinous than Abu Ghraib, and who himself is now standing trial for murder.

The Shadow World (U.S.)
Director: Johan Grimonprez
The Shadow World explores the arms industry: a business in which profits are calculated in the tens of millions of dollars, while losses are counted in human lives.