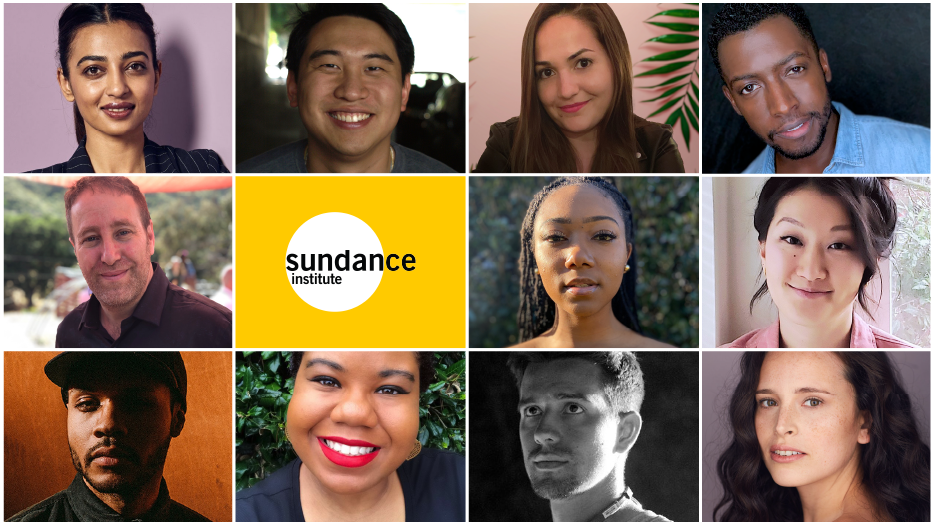 We’re thrilled to announce the 11 screenwriters selected to participate in Sundance Institute’s ninth annual Screenwriters Intensive, taking place digitally on March 4–5, 2021. The Intensive is a two-day workshop for emerging independent writers and writer/directors developing their first fiction features. This cohort of artists from traditionally underrepresented communities will have the opportunity to interrogate their stories and refine their artistic practice, all under the guidance of established writers and the Institute’s Feature Film Program, led by me and the program’s Founding Director, Michelle Satter.

We are inspired by this group of dynamic artists, who are each telling indelible stories with specificity, boldness, and their own distinctive style. It’s a privilege to bring them together as part of the Sundance community, and we look forward to embarking on a creative, collaborative journey with them. The generous and experienced advisors for the 2021 Intensive include Andrew Ahn, Susanna Fogel, Tanya Hamilton, Sarah Koskoff, Michael Starrbury, Wesley Strick, Yen Tan, Joan Tewkesbury, Rose Troche, Ligiah Villalobos, and Kevin Willmott. The Sundance Institute Screenwriters Intensive is made possible with leadership support from the Will & Jada Smith Family Foundation.

Brian Robau is a Cuban American two-time Student Academy Award–winning director. In 2016, he won a Student Academy Award for his film It’s Just a Gun, which went on to be nominated for a College Television Award and was an Official Selection at the Telluride Film Festival. His recent film Esta Es Tu Cuba won a Student Academy Award in 2018, as well as a Student DGA award, a College Television Award, and a nomination for a Student BAFTA. The film is inspired by his father’s story and the stories of the over 14,000 Cuban refugee children of Operation Pedro Pan. It is currently available on HBO Max. Robau received an MFA in directing from Chapman University’s Dodge College of Media Arts. Born and raised in Miami, Florida, he currently resides in Los Angeles, California.

Daniel Klein received his Master of Fine Arts from Chapman University, where he wrote two Student Academy Award–winning short films: It’s Just a Gun (2016) and Esta Es Tu Cuba (2018). Esta Es Tu Cuba has since been awarded the 2019 College Television Award for Best Drama and the HBO Ibero American Short Film Award at the 2019 Miami International Film Festival. Klein previously wrote and directed the short film AB-, which premiered at the Tribeca Film Festival, after which it screened at festivals around the world. Klein has also created and sold original television projects to Twentieth Century Fox and Touchstone Studios.

Emilio del Hoyo, a 50-year-old huckster, and his 15-year-old daughter, Consuelo, endure a perilous journey from Cuba to Miami while attempting to reconcile their broken relationship.

Raised in the Chinese American enclaves of New York City and San Francisco, William Kwok is a filmmaker and an attorney practicing corporate and entertainment law. His directing and writing credits include the documentary shorts Grandma and The Two Deaths of Los Angeles Chinatown, and the fiction short Nocturne, No. 1: A Very Short Film About Family. His producing credits include the fiction shorts Layover, on the Shore, The Broken Heart of Gnocchi Bolognese, and Jump. He is an alumnus of the Armed with a Camera Fellowship for Emerging Media Artists from Visual Communications, and most recently served as co-producer and production manager of the feature film I Was a Simple Man, which premiered at the 2021 Sundance Film Festival. Kwok is a graduate of Columbia University, the University of Southern California’s School of Cinematic Arts, and the University of Michigan Law School. Recipient of the Sundance Institute Asian American Fellowship.

It takes Jesus Christ, kimchi hot dogs, Cantonese pop music, psychedelics, and meeting the literal girl of his dreams for a shiftless teenage outer-borough New Yorker to finally appreciate the inextinguishable affection of his longtime classmate.

Tulica Singh began her career writing and directing in between bartending shifts in New York City. While attending USC’s School of Cinematic Arts, her short film Dream Girl screened at festivals including the Academy-qualifying Palm Springs International Film Festival and also played in 21 theaters across Germany. In 2013, she received the John Huston Scholarship for excellence in directing. Since 2015, her web series Croissant Man has been in 20 festivals, including the New York Television Festival, and has won 13 awards. It has been featured in LA Magazine, IFC’s Comedy Crib, and is one of the first independent web series to be distributed through Amazon Prime. Currently, she works at the mobile gaming company N3twork, writing, directing, and animating videos for the popular game Tetris. Singh is committed to telling stories that blend satire with sincerity. Recipient of the Sundance Institute | Comedy Central Comedy Fellowship.

In 17th-century Colonial America, the daughter of the most noble family in town tries to make a name for herself by bringing witches into the mainstream. But just as she gets close to success, she accidentally provokes the town’s first burning.

Chy Chi is a Korean American director from Seattle. Her most recent film, How to Crack Hard-Boiled Eggs, starring herself and her father, premiered at the Viennale in 2016. Her work primarily focuses on first and second generation Asian-Americans, often pulled from her upbringing as the child of immigrants. She brings the experiences of her childhood working alongside the carnival throughout the Pacific Northwest and speaks to the challenges immigrant families face with assimilation, marginalization and mental health, all within the lower income strata. Chy has her MFA in Film Directing from the California Institute of the Arts (CalArts), and is based in Los Angeles and Seattle.

Eight Mysterious Qualities of the Ocean

Jo Hatcher is a 22-year-old filmmaker who will graduate from the University of North Carolina School of the Arts in May 2021 with a Bachelor of Fine Arts in Directing. Born in Jacksonville, Florida, and raised in North Carolina, Hatcher has been a semi-finalist for the Sundance Film Festival Horizon Award, interned at the 2019 Cannes Film Festival with Voltage Pictures, and has written and directed several short films. One short, Shelter, was recognized by six film festivals, including Cucalorus 25 and receiving the Emerging Grit Award at the 2020 Indie Grits Film Festival. Hatcher’s commitment to activism and her love of culture fuels her passion for telling stories about the plights and triumphs of black women in 21st-century America.

A bright teenage girl living in a car with her ex-boyfriend must make a fateful decision in order to realize her dreams of college.

Jessica Mendez Siqueiros is a Chicana writer/director of mixed Indigenous Sonoran and European ancestry seeking to normalize complex and authentic narratives about the Southwest Mexican-American community through film. Her short films have screened at over 75 festivals, including Palm Springs, Seattle, Cleveland, Hamptons, and the Los Angeles Latino Film Festival. They have garnered an Audience Pick from Palm Springs ShortFest, the KidsEye Grand Prize for Best Live Action Short from Flickers Rhode Island Film Festival, Best Narrative Short (Comedy) from Cinequest, among other awards. Siqueiros’ latest short was produced by Walt Disney Studios as part of the inaugural class of their Launchpad Shorts Incubator. The film will be released on Disney+ later this year. She will also participate in the second class of Powderkeg Fuse helmed by Paul Feig and Lisa Fischer. Recipient of the Sundance Institute Latinx Fellowship.

1967 Tucson: Amidst the tense struggles of a newly integrated community, a young Mexican American girl with a fantastic view of the world resolves to solve all of the problems through a common love of dance.

Radhika Apte is a first-time filmmaker. She has appeared in over 45 feature films and series as a lead actress. Apte was nominated for a Best Actor International Emmy for her work in Netflix’s Lust Stories, which she also co-wrote, and won the Best Actress in an International Narrative Feature Award at the 2017 Tribeca Film Festival for her work in Madly. Apte studied contemporary dance and Kathak after graduating with a degree in economics and mathematics. She is based out of India and London.

Having found themselves in a delusional state, trying to discover if they are sleepwalking, a couple on the cusp of starting a family, dreaming of the perfect future, are made to face the consequences of their willful blindness.

Virginia native Joyce Sherrí stepped off a Greyhound bus at New York City’s Port Authority bus terminal in August 2010. Armed with her passion for creative writing, she hurled herself into the world’s independent film capital in pursuit of a career as a writer and director. In 2016, Sherrí received her MFA in Filmmaking from New York University. Shortly after that, she was selected for the Project Her Incubator, commissioned by Indigenous Media and Condé Nast Entertainment where she wrote, directed, and produced the short film Beauty. More recently, Sherrí was selected as the grand prize winner of the 2020 Slamdance screenplay competition for her feature script, Sweet Sixteen. She is represented by The Gersh Agency and Untitled Entertainment.

All Sweet Harrison wants is to celebrate her upcoming sixteenth birthday with a perfect party, but the financial challenges in her world force her to face hard truths about her friends, family and even herself as her pursuit of this rite-of-passage sends her on a premature journey towards adulthood.

Timothy Ware-Hill is a native of Montgomery, Alabama, where he received a BA in Theater Arts from the HBCU Alabama State University. He later studied at UCLA in the MFA Acting Program. Most of his career has been as an actor in film/tv and Broadway, where he played the role of Lola in Kinky Boots. He recently received an MFA in Professional Screenwriting from National University. Ware-Hill wrote and directed a seven-episode web miniseries, The Pride Project, featuring several Broadway actors reciting Ware-Hill’s original poetry focusing on social themes including race, gender, and sexuality. He performed, wrote, directed and produced the Netflix animated short Cops And Robbers, with producers Lawrence Bender and Arnon Manor and executive producer Jada Pinkett Smith. The short is based on an original poem by Ware-Hill, wrought from the devastating snuff film of Ahmaud Arbery.

Tyrone and the Looking Glass

In 1963, during the height of the Civil Rights Movement, a Negro boy in Birmingham, Alabama must overcome several obstacles in his quest to obtain the one treasure that will help him defeat a fire breathing dragon that seeks to destroy him and his loved ones.

Xavier Coleman is a Brooklyn-based filmmaker with a focus on the intersection of genre and identity politics. His most recent directorial effort was the short film White Knuckle. The film screened at the Movies Under the Stars series presented by the NYC Mayor’s Office, and was listed in AMC and Shudder’s Horror Noire syllabus of Black horror. As a nonfiction editor, Coleman has worked with writers and directors including Elliot Page, Ira Glass, and Joe Berlinger. His latest documentary feature film as an editor, There’s Something in the Water, premiered at the 2019 Toronto International Film Festival.

When a serial killer begins targeting the gentrifiers of a dwindling, historically Black neighborhood, a young newcomer must determine the murderer’s identity… before she’s next.