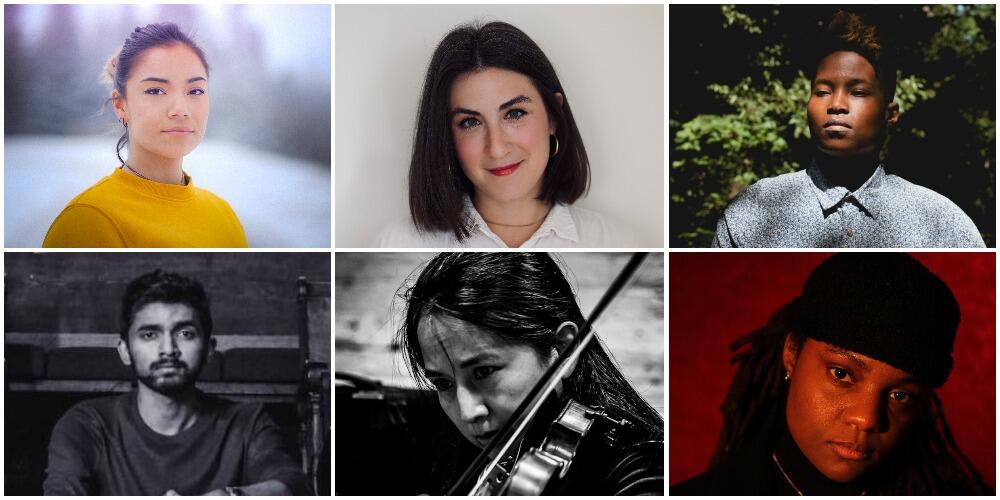 In spring of 2021, the Sundance Institute conducted an online Film Music Intensive, an all-too-infrequent chance to create and claim some free creative space and examine something that fascinates us all: What happens when you combine music and film to tell a story?

During the Intensive, fellows wrote music to pictures and engaged in a series of presentations and discussions, working closely with the advisors to develop their art and craft as film composers.

MORE ABOUT THE FELLOWS:

Chanell Crichlow is a low brass multi-instrumentalist. As a tubist, she has performed with Yuga Cohler, Ludwig Göransson, Solange, Andy Grammer, Shamir, and others. As a bandleader, she has performed at The Kennedy Center, Lincoln Center, FloydFest, The Blue Note, Summerstage, and the Apollo. Crichlow has released two projects under the moniker Tubafresh.

Kalaisan Kalaichelvan is a Toronto-based pianist, composer, orchestrator, and music producer. His compositions have been recognized with best-music awards at the Santori Film Festival and Largo Film Awards. He will be serving as composer-in-residence for the Canadian Film Centre in 2021. Having worked across various disciplines and communities of thought, Kalaichelvan seeks to bring together incongruous institutions, building novel structures that reflect his artistic upbringing.

Alexandra Kalinowski is a composer, songwriter, and classically trained vocalist and pianist. Her film scores include The Boxers of Brule documentary and The Gaze. She recently co-wrote the soundtrack for 25 Cents Per Minute with Prateek Rajagopal. She has written additional music for PBS and Lifetime. She has a master’s in music from the University of Southern California’s Thornton School of Music Screen Scoring Program.

Olivia Komahcheet is a nomadic-bred singer-songwriter of Indigenous heritage whose vibrant music blends elements of alternative R&B, neo soul, and indie electronic. Her live performance was presented at House of Blues in Las Vegas. Focusing on sound design, she collaborates with a variety of artists, beat makers, and producers.

Dana Lyn is a violinist/fiddler, pianist, and bass player. She has performed at Lincoln Center, The Beacon Theater, Brooklyn Academy of Music, Carnegie Hall, and The Town Hall; she has received commissions from Apple Hill, Brooklyn Rider, the National Arts Council of Ireland, and others. She collaborated on two albums with actor Vincent D’Onofrio. She has also created album art and stop-motion animations for Taylor Mac and others. She was a recipient of a 2020 NYC Women’s Fund for Media, Music and Theatre award.

EmmoLei Sankofa is a composer and artist, stretching across music, visual media, and fine art. She founded the creative audio collective Bèl Son. Film projects as a composer include Jim, Power Women, Parallax, and Kitchen. Her discography includes over 21 independently released albums, EPs, and singles. Sankofa and her work have been featured on a variety of platforms, including Adult Swim, Splice, Lyrical Lemonade, LANDR, The Recording Academy, Gender Amplified, Billboard, and more.