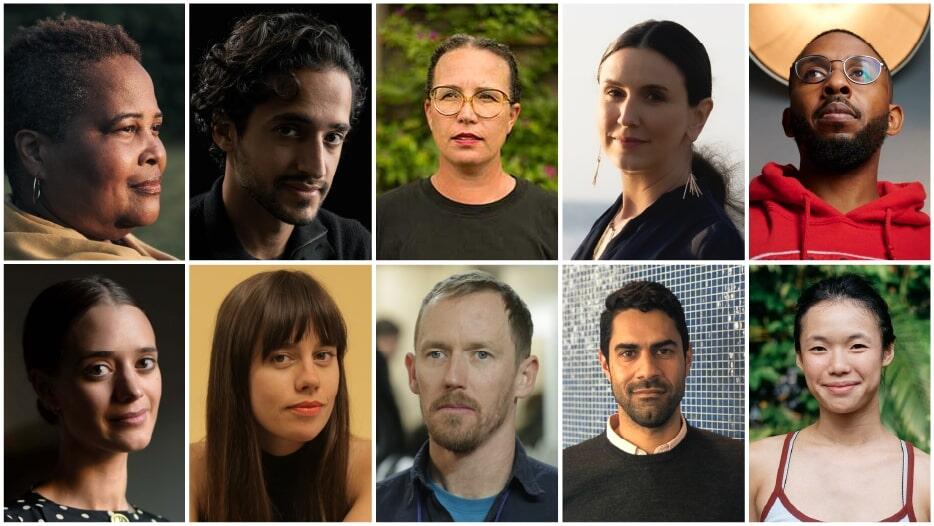 The Labs support emerging independent producers and engage the community of veteran producers who sustain the vibrancy and vitality of independent film. Under the guidance of advisors, the Labs allow fellows to deepen the creative potential of their projects, develop their creative instincts and evolve their storytelling, communication and problem-solving skills at all stages of their project. The fellows continue on through the Producers Summit and receive ongoing year-long mentorship, creative support, and networking opportunities with industry.

The Fellows and projects selected for the 2021 Feature Film Producers Lab are:

Caity (U.S.)
Producing Fellow: Katie White
While managing her family’s local haunted house with her alcoholic father, Paul, 16-year-old Caity navigates the evaporating space between childhood and adulthood and discovers a fantasy of intimacy in another teenage employee, Hannah.

Katie White is a creative producer. Her work includes the award winning film Best Summer Ever (SXSW 2021), hailed as a ‘Critics Pick’ by The New York Times, and praised widely for its groundbreaking inclusivity. She recently produced the queer comedy Bridesman, Grindr’s first foray into narrative series. Katie is the co-founder of the Eastside Women’s Film Club, a volunteer with SELAH, and member of the DPA, membership and inclusion committee.

Fancy Dance (U.S.)
Producing Fellow and Mark Silverman Honoree: Deidre Backs
Following the disappearance of her sister, a Native American hustler kidnaps her niece from her white grandparents and sets out for the state powwow in the hopes of keeping what’s left of their family intact.

Deidre Backs worked at Alexander Payne’s development company on The Descendants and next on Nebraska after transitioning to production. Her first foray into independent film was as an associate producer on Kumiko, the Treasure Hunter with the Zellner Brothers. Deidre then served under Daniel Lupi on Spielberg’s Bridge of Spies and Ready Player One, and Jordan Peele’s Us. Most recently, she produced the short film, Little Chief, which premiered at the 2020 Sundance Film Festival.

The Incredible Heist of Hallelujah Jones (U.S.)
Producing Fellow: Duran Jones
During a season of extreme gun violence in Compton, California, a precocious book thief who hears the voices of his dead parents finds out that his family’s long-lost novel is being auctioned off. With the help of the neighborhood matriarch, a 100-year-old Black woman, he concocts a plan to steal it back.

Duran Jones is a graduate of Hampton University, Scripps Howard School of Journalism, and an accomplished independent rapper/ songwriter with a keen sense of storytelling. Now a Producing Fellow at the American Film Institute Conservatory, his goal is to tell truthful stories for people of color that impact our global community. Jones is also a graduate of the 2020 PGA Power of Diversity workshop.

The Plutonians (U.S.)
Producing Fellow: Shao Min Chew Chia
When the scientific definition of the word planet threatens to exclude Pluto, ninth planet expert Alvin Gibbs swoops into a sleepy international astronomy conference to save it, bullying others to cover his fear that his life’s labor may ultimately be worthless.

Shao Min Chew Chia began her career as a producer for a current affairs program on Channel News Asia. Since then, she has produced multimedia for international sporting events, commercials, music videos, short films, and documentaries. Her work as a writer, producer, and director has screened at film festivals including Berlin and San Sebastian, and has been supported by The Spike Lee Production Fund and European Short Pitch. She has a bachelor’s degree from Harvard University and graduated from the NYU master’s program in filmmaking as an Ang Lee Scholar.

Sundown Town (U.S.)
Producing Fellow: Austin Sepulveda
When Loretha learns that her grandmother’s health has taken a downward turn, she returns home to the deep south with her naive boyfriend Sam. As mysterious encounters begin to unearth long held prejudices, Lo’s scarred past comes to light when she discovers a dark secret hidden in her own hometown.

Austin Sepulveda obtained his Bachelor’s Degree from The Pennsylvania State University in Business and MFA from USC’s Peter Stark Producing Program. He interned with ICM, Open Road, Whitaker Entertainment, Team Downey, Skydance, and Legendary Pictures. Austin has produced two feature films as well as over twelve short films and nearly fifty commercials. His focus is working with passionate filmmakers, and he declares he will go to the edges of the Earth for those he believes in.

The Fellows and projects selected for the 2021 Documentary Producers Lab are:

All that is Solid (Todo Lo Sólido)
Producing Fellow: Joie Estrella Horwitz
The story of an island sinking into the Caribbean Sea. As a nameless drifter searches for explanations about the island’s destiny, reality and fantasy merge to reflect on the construction of a nation and the burden of progress.

Joie Estrella Horwitz is a filmmaker and producer who was named one of the “25 New Faces of Independent Film” by Filmmaker Magazine in 2020. Her work has screened at REDCAT, Visions du Reel, ICDOCS, Flaherty Seminar, Tacoma Film Festival, among others. Her current film, Tender Crossings, is a ghost story about notions of home on the US/Mexico border. She is a co-founder of Bahía Colectiva, a community of filmmakers who collaborate in cinematic practice and is producing Todo lo Sólido, which received a development grant from the Sundance Documentary Fund.

Commuted
Producing Fellow: Darcy McKinnon
When Danielle Metz’s triple life sentence was commuted, she got a rare chance to regain the life and family that she’d been dreaming about in prison. But back home in New Orleans, she steps into a different reality. Commuted traces Danielle’s journey to find purpose and love, and to confront the wounds of incarceration that linger after release from prison.

Darcy McKinnon is a documentary filmmaker based in New Orleans who produces work with Southern filmmakers. She just released The Neutral Ground with CJ Hunt, and is in late production on Commuted (dir. Nailah Jefferson), and Roleplay (dir. Katie Mathews). Her directorial debut, the award-winning short A Fine Girl, is in the festival circuit. McKinnon’s work has been broadcast on POV, Reel South, LPB and Cinemax. Darcy is a co-founder of All Y’all, the Southern Documentary Collective, part of the Impact Partners Producing Fellowship, and one of Filmmaker Magazine’s 2020 25 new faces in independent film.

I Didn’t See You There
Producing Fellow: Keith Wilson
Spurred by the spectacle of a circus tent that goes up outside his Oakland apartment, a disabled filmmaker launches into an unflinching meditation on freakdom, (in)visibility, and the pursuit of individual agency.

Keith Wilson is a director, creative producer, and visual artist based in San Francisco and Athens, Georgia whose work has been exhibited at Sundance, Berlinale, South by Southwest, Hot Docs, the U.S. National Gallery of Art, documenta14, and the Museum of Modern Art. He received his Master of Fine Arts in Film Production from the University of Texas-Austin, and grew up on a cul-de-sac in suburban Atlanta.

Loyalty
Producing Fellow: Razi Jafri
An all-access look inside the military and the fight for religious freedom led by three courageous Muslim chaplains. The film explores why Muslim service members defend a country that does not always defend them and how they reconcile this contradiction amidst growing white supremacy and violent hate crimes against religious minorities.

Razi Jafri is a documentary filmmaker and producer whose work focuses on race, immigration, democracy and human rights. His projects include Hamtramck, USA, a film about democracy in America’s first Muslim majority city. The film premiered at SXSW and aired on the PBS program America ReFramed.

Ann Bennett is an Emmy-nominated documentary-filmmaker, multimedia-producer, and teaching-artist who has devoted her career to telling diverse stories through film, television, and interactive projects. She has produced documentaries for PBS series American Experience, ‘Independent Lens and Dance in America’, many of which have premiered at the Sundance Film Festival.

Projects invited to participate in the Producers Summit include nonfiction features:

The Sundance Institute Producers Program is supported by an endowment from the Sandra and Malcolm Berman Charitable Foundation, with generous additional support from Cinereach, Amazon Studios, and SAGindie.

About Sundance Institute
As a champion and curator of independent stories for the stage and screen, Sundance Institute provides and preserves the space for artists in film, theater, film composing, and digital media to create and thrive. Founded in 1981 by Robert Redford, the Institute’s signature Labs, granting, and mentorship programs, dedicated to developing new work, take place throughout the year in the U.S. and internationally. Sundance Co//ab, a digital community platform, brings artists together to learn from each other and Sundance Advisors and connect in a creative space, developing and sharing works in progress. The Sundance Film Festival and other public programs connect audiences and artists to ignite new ideas, discover original voices, and build a community dedicated to independent storytelling. Sundance Institute has supported such projects as Clemency, Never Rarely Sometimes Always, Zola, On The Record, Boys State, The Farewell, Honeyland, One Child Nation, The Souvenir, The Infiltrators, Sorry to Bother You, Won’t You Be My Neighbor?, Hereditary, Call Me By Your Name, Get Out, The Big Sick, Mudbound, Fruitvale Station, City So Real, Top of the Lake, Between the World & Me, Wild Goose Dreams and Fun Home. Join Sundance Institute on Facebook, Instagram, Twitter and YouTube.