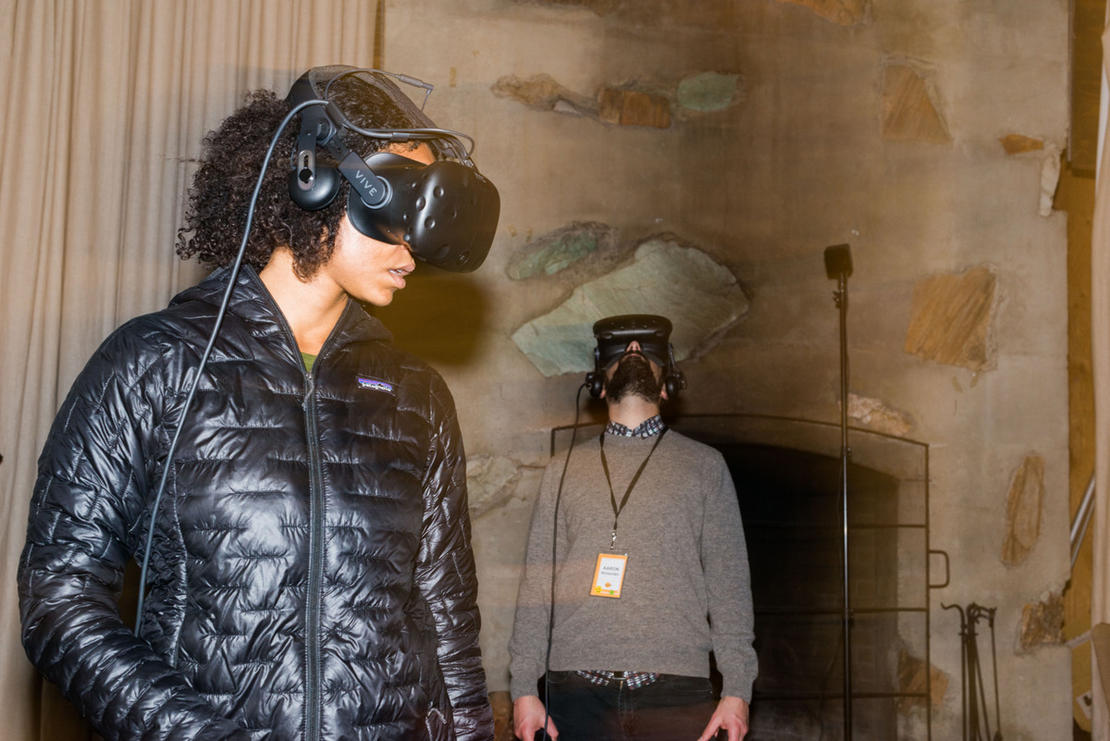 An immersive speculative fiction using computer vision and narrated by our virtual descendant, Ancestors implicates the audience in a complicated technological future kinship.

Hanna Haaslahti is a media artist creating interactive narratives using history as a means of critically re-evaluating the present, and computer vision to explore how the optical and digital technologies shape the social arena. She has exhibited in numerous international media art festivals and galleries, including Ars Electronica, Hamburg Kunsthalle, HEK (Basel), and Watermans (London).

Steye Hallema is the founder and creative director for The Smartphone Orchestra, performed in festivals worldwide using unprecedented audience engagement through mobile phones. He is the creator of several award-winning immersive theatre and virtual reality experiences. Steye studied both music and fine arts at the Royal School for Music, Dance and Art in the Hague, the Netherlands.

A live performer uses virtual reality, sensors, and real-time data to control a digital avatar: an excavation programmer re-awakens the God of Rare Earth in a ceremony dedicated to the ancestors who once healed the land from centuries of scars.

Kordae Jatafa Henry is a Los Angeles-based filmmaker and visual artist working between the real and the virtual to explore new worlds through myth and Black intonation. The release of his 2019 short film Earth Mother, Sky Father led him to the 2019 Design Indaba Conference and a nomination for the Shots Awards 2020 New Director of the Year, and is exhibiting around the world.

Jeremy Kamal is a director, visual artist, designer, and music producer. A Landscape Architecture graduate of Harvard GSD, he is interested in how abstractions such as thoughts, values, addictions, and emotions shape landscapes. Using animated films, music, game engines, and narratives, Kamal’s work offers another perspective on the way we think about contemporary culture, space, the Anthropocene, and the mind.

An interactive documentary VR experience, Kusunda explores what it means to lose a language, and what it takes to preserve one.

Gayatri Parameswaran is an award-winning immersive creator and co-founder of NowHere Media, a storytelling studio that views contemporary issues through a critical lens. Her works have been presented at the Venice International Film Festival, SXSW HotDocs, the United Nations, and beyond.

Felix Gaedtke is an award-winning immersive storyteller and creative producer in Berlin. He co-founded the storytelling studio NowHere Media with an urge to create spaces for underrepresented voices in mainstream discourses. Felix’s works have been exhibited at the Venice International Film Festival, SXSW, the United Nations, and VRHAM!

Quantified Surrogate is a durational performance and documentary project that explores a reproductive future in which we have increasing control over life through genetic testing, assistive reproductive technologies, and changing notions of family.

Lauren Lee McCarthy is an LA-based artist examining social relationships in the midst of surveillance, automation, and algorithmic living. She is also the creator of p5.js, an open-source arts coding platform. Lauren is a Creative Capital awardee, recipient of the IDFA DocLab Award for Immersive Non-Fiction, and a previous Eyebeam resident. Her work has been supported by the Mozilla Foundation, the Knight Foundation, Sundance Institute, Google, and Rhizome.

David Leonard, born and based in Los Angeles, is an artist concentrated on weaving, current events, technology and the aesthetic representation of these topics through video, sculpture, and interactive media. His journalistic and branded video work has been shown on ABC, CBS, CNN, Buzzfeed, and Chinese Central Television; and his art has been exhibited at the Getty Museum, the Hammer Museum, What Pipeline, the Bergen Kunsthall, and MMK in Frankfurt.

In an examination of the intersections between international Indigenous communities, extracted materials, and colonial nuclear obsession, Seeing is Believing collaborates with technologies like deepfakes and AI. Fiction can seem as real as fact, probing conflations of belief, truth, and conspiracy with hard evidence.

Kite is an Oglála Lakȟóta performance artist, visual artist, composer, PhD candidate at Concordia University, research assistant for the Initiative for Indigenous Futures, and a 2019 Trudeau Scholar. Her research is concerned with contemporary Lakota epistemologies through research creation, computational media, and performance practice.

Devin Ronneberg works primarily in sculpture, sound, image-making, networking, engineering, and computational media. His work is currently focused on the unseen implications of emergent technologies and artificial intelligence, information control and collection, and the radiation of invisible forces. He holds a BFA in music technology from California Institute of the Arts, performs under the Aerial moniker, and is an experimental aircraft designer/builder at Berkut Engineering.

On the premise of symbioses, a post-human biotope might be rich and teeming with new artificial or biochemically enhanced life, resources, habitats, bodies, and information sharing in an inclusive way. Somewhere on the ruins of an inhospitable Anthropocene, after climate change has changed the world beyond recognition, Symbiosis is a multi-sensory social VR experience using soft robotic wearables that allow for the embodiment of a speculative post-human and nonhuman reality, symbiotic human-animal or human-technologic relationship.

Marcel van Brakel is a founder and lead designer at Polymorf, an interdisciplinary Dutch experience design collective. He also works as an independent artist, writer, librettist, and film and theatre director. His critical projects and artistic research on immersive storytelling and embodiment often incorporate emerging technologies, multisensory design, and performativity.

Mark Meeuwenoord, a member of Polymorf, is a media artist whose practice shifts between creative coding, sound design, multisensory design, social design, robotics, artistic research, music, and engineering. Mark is a senior lecturer and fellow researcher for Robotics and Sensoring at the Avans University for Applied Sciences in Breda, the Netherlands. His work has won several awards, including the Art & Olfaction Award for Experimental Scent, and the Sheffield Doc/Fest Alternate Realities Audience Award.

Sundance Institute
Founded in 1981 by Robert Redford, Sundance Institute is a nonprofit organization that provides and preserves the space for artists in film, theatre, and media to create and thrive. The Institute’s signature Labs, granting, and mentorship programs, dedicated to developing new work, take place throughout the year in the U.S. and internationally. Sundance Co//ab, a digital community platform, brings artists together to learn from Sundance Advisors and connect with each other in a creative space, developing and sharing works in progress. The Sundance Film Festival and other public programs connect audiences and artists to ignite new ideas, discover original voices, and build a community dedicated to independent storytelling. Sundance Institute has supported such projects as The Farewell, Late Night, The Souvenir, The Infiltrators, Sorry to Bother You, Eighth Grade, Won’t You Be My Neighbor?, Hereditary, RBG, Call Me By Your Name, Get Out, The Big Sick, Top of the Lake, Winter’s Bone, Dear White People, Little Miss Sunshine, Beasts of the Southern Wild, Fruitvale Station, State of the Union, Indecent, Spring Awakening, A Gentleman’s Guide to Love and Murder and Fun Home. Join Sundance Institute on Facebook, Instagram, Twitter and YouTube.