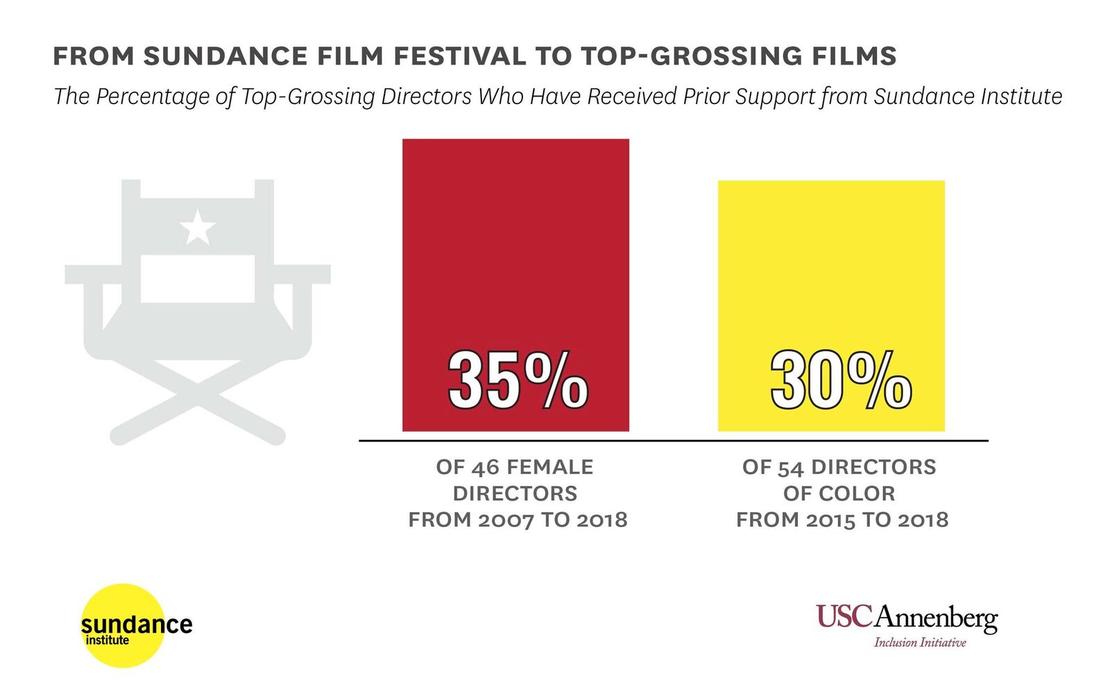 Sundance Institute/USC Annenberg Inclusion Initiative study shows women are represented at Sundance in significantly greater numbers than ten years ago, but are still far below 50%.

PARK CITY, UT – January 25, 2019 — Sundance Institute and the USC Annenberg Inclusion Initiative (AI2) today released demographic data on submissions and acceptances to the annual Sundance Film Festival to reveal key insights on the talent pipeline in the film industry for women and people of color.

The report was issued in partnership with Professor Stacy L. Smith and the USC Annenberg Inclusion Initiative. It examined more than 26,000 shorts and feature projects submitted to the Sundance Film Festival in 2017 and 2018 across both U.S. and international filmmakers. The report also includes an analysis of the Sundance Institute’s Artist Support programs from 2016 and 2017.

The analysis reveals that, overall across the entire Festival, 28% of feature-length and episodic projects submitted to the Sundance Film Festival across 2017 and 2018 had at least one woman director, as did 34.1% of shorts. Examining submissions reveals how interested women and people of color are in showcasing their independent work at Sundance at the earliest stages of filmmaking.

Data on acceptances was included to gauge representation at the Festival over the past two years. Of feature films and episodic content accepted in 2017 and 2018, 35% had a woman director, while 51.4% of short films did.

Separately, Sundance calculated the rates of submissions and acceptances to the 2019 Festival, which are not part of the study but show slight increases over the previous years. 31% of feature-length submissions to the 2019 Festival had at least one woman director, as did 35% of episodic and shorts content. Of feature films and episodic content accepted in 2019, 41% had a woman director, while 52% of shorts did, for a combined total of 45%.

In the dramatic film category, there was an increase of over 50% in films submitted by women since the last study conducted by Smith and her team and funded by the Sundance Institute and Women in Film LA in 2009 (from 13.6% to 21.5%).

“It’s clear from this data that there is a robust and exciting talent pool including women and people of color,” said Keri Putnam, Executive Director of the Sundance Institute. “We are proud of the investments the Institute has made in identifying and supporting underrepresented artists, and we are even prouder of the results those investments have catalyzed, over the two years captured here.”

For the 2019 Sundance Film Festival, 55% of accepted short films and 38% of accepted dramatic features had a director of color. 18% of accepted projects, across features, episodics and shorts, were directed by one or more woman of color.

Gains in representation drop off dramatically as filmmakers advance in their careers. People of color directed 22.3%, and women only 4%, of the country’s top grossing films in 2018. Only nine out of 1,335 directors (<1%) of the most popular 1,200 films across 12 years were women of color, according to another recent report from AI2.

“Good stories depend on diverse perspectives. Those perspectives will only be supported with intentional outreach and support for intersectional voices across the spectrum,” said actor, producer and screenwriter Lena Waithe. “The audience is there to support good stories but we have to work harder to see those stories brought to light.”

“This kind of data practice is a helpful barometer in our work as Festival programmers,” said Kim Yutani, Sundance Film Festival’s Director of Programming. “Our curatorial process operates independently from demographic information, but periodic and holistic studies of statistics and trends among submissions and acceptances allow us to assess how our work reflects our values of inclusion as we make creative curatorial decisions.”

This data also shows that a solid percentage of top-grossing filmmakers have interacted with Sundance earlier in their careers. Of the women and people of color who directed top-grossing films in recent years – 30 – 35% had prior support from Sundance, whether that was a Lab, screening a film at the Festival, or other support.

The findings of the study will be discussed at a panel at the Sundance Film Festival on Friday January 25th moderated by Franklin Leonard and featuring Dr. Stacy L. Smith, Nina Jacobson, Lena Waithe and Sundance Institute’s Director of Outreach and Inclusion Karim Ahmad.

The full report can be found online here.