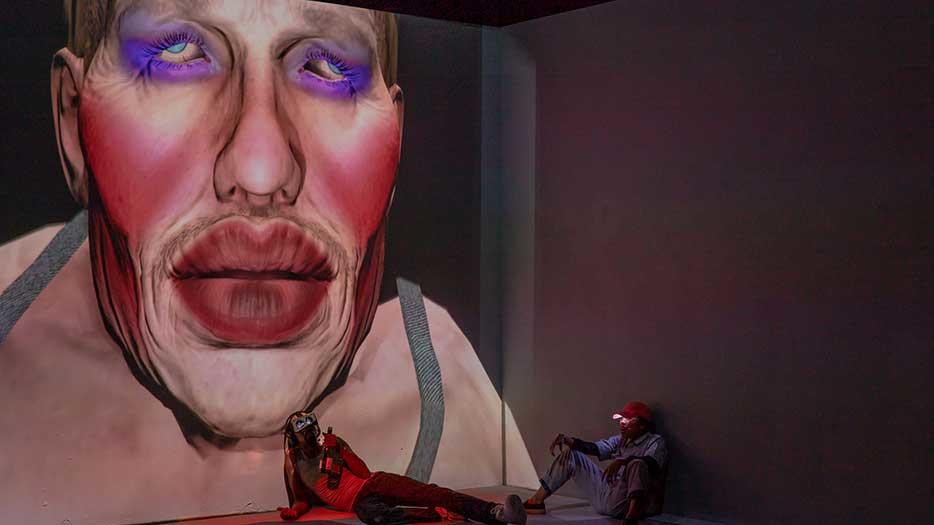 Park City, UT — Sundance Institute spotlights work at the dynamic crossroads of film, art and
technology with the New Frontier selections for the 2019 Sundance Film Festival, announced today. This curated
collection of cutting-edge independent and experimental media works are by creators who are pushing artistic
innovation across new mediums that include VR, AR, mixed reality (MR) and AI. Programmers assembled a global slate of
work from a mix of invitations and submissions to an open call for VR work earlier this year.

Robert Redford, President and Founder of Sundance Institute, said, “For over a
decade, New Frontier has pushed the boundaries of the possible, illuminating the potential of technology and
storytelling. These independent cross-media artists create new realities for, and with, their work — and the results
inspire.”

Shari Frilot, Chief Curator, New Frontier, said “This year’s New Frontier is an explosion of
experimentation, bearing a motherload of innovative custom tech that take us higher. Biodigital loops are
terraforming and transmogrifying our world.The dynamics of biodigital looping – digital platforms that begin and end
by connecting with a human being who connects to that same platform – are being taken on by this year’s artists with
gusto, as they pull visceral focus on what it means to be human on this transforming terrain.”

In addition to the New Frontier program announced today, films across all
categories, including works in the Shorts, Special Events and Indie Episodic sections, have been announced and are
listed at
sundance.org/festival.

Walden / Switzerland (Director and screenwriter: Daniel Zimmermann, Producer: Aline
Schmid)
— A fir tree in an Austrian forest is felled and processed into wooden slats, which are then transported by train,
boat and truck into the Brazilian rainforest. With powerful 360°-sequence shots, the film portrays a paradoxical
journey along globalized trade routes.

Gloomy Eyes / France, Argentina (Lead Artists: Jorge Tereso, Fernando Maldonado, Key
Collaborators: Antoine Cayrol, German Heller, Santiago Amigorena) — 1983, Woodland City. Being a zombie is against
the law. Like all of his kind, young Gloomy is hiding in the forest, away from bounty hunters. But Gloomy is
different. While bitterness plagues the city, he strives to find a balance in his mysterious dual nature.

Grisaille / U.S.A. (Lead Artist: Teek Mach, Key Collaborator: Joel Douek, Andrew Sales) —
In
2016, a young artist traded her paintbrushes for a headset and began inhabiting virtual reality more than the real
world. In this VR installation, join her in a recursive exploration of the infinite self. When your body leaves the
experience, your presence lives inside her ever-expanding virtual painting.

Thomas Villepoux, Estela Valdivieso Chen) — Despite the cost, Mrs. Song hires androids to assist
in the lavish wedding of her daughter, Zhen-Zhen. But when she tries to modify the behavior of the android
bridesmaid, a new model named Ah-Hui, its functioning begins to go haywire.
Cast: Janet Hsieh, George Young,
Patty
Lee, Ann Lang, Sharon Landon
.

Mica / U.S.A. (Lead Artists: John Monos, Alice Wroe) — I am Mica, the human center of AI
and
mixed reality. In a gestural exchange, I contemplate my place in your world. Be my collaborator; let’s champion
genius and celebrate creativity. Join me at the beginning of my existence, to pull from the past and create the
future.

Sweet Dreams / United Kingdom (Lead Artists: Robin McNicholas, Ersin Han Ersin, Barnaby
Steel, Nell Whitley, Key Collaborator: Simon Wroe) — An invitation to the meal of your dreams. But will it remain a
dream, forever out of reach? Drawing on mythological archetypes, the project turns a fine dining experience into a
playful exploration of the destructive nature of our appetite and our debt to pleasure.

Ghost Fleet VR / U.S.A. (Lead Artists: Lucas Gath, Shannon Service) —An immersive look at
the true story of modern slavery in the Thai fishing industry, told through the experience of one man’s harrowing
ordeal to escape a prison of water after 10 years at sea.
Cast: Tun Lin, Vithaya Pansringarm.

Last Whispers: An Immersive Oratorio / U.S.A. (Lead Artists: Lena Herzog, Jonathan
Yomayuza,
Meghan McWilliams, Laura Dubuk, Key Collaborators: Nonny de la Peña, Mark Mangini, Amanda Tasse, Cedric Gamelin,
Marilyn Simons, Mandana Seyfeddinipur) — At an unprecedented speed faster than the extinction of most endangered
species, we are losing our linguistic diversity—and the very means by which we know ourselves. This immersive
oratorio is an invocation of the languages that have gone extinct and an incantation of those that are endangered.

Live Stream from Yuki <3 / Taiwan (Lead Artist: Tsung-Han Tsai, Key Collaborators:
Meng-Yin Yang, Inch Lin, Pu-Yuan Cheng) — Yuki live streams her love life as usual to a group of supportive netizens,
though an uninvited guest crashes the party and strips her of her disguise. Can you see what is real and what is
fallacious?
Cast: Jia-Yin Tsai.

Marshall from Detroit / U.S.A. (Lead Artists: Caleb Slain, Felix Lajeunesse, Paul Raphael,
Key Collaborators: Stephane Rituit, Ryan Horrigan, Paul Rosenberg, Eric Hahn) — Growing up, Marshall Mathers dreamed
of rapping his way out of Detroit. Years and fortunes later, he still hasn’t left. Join him on a night ride through
his hometown, where the mirrored struggles of Eminem and the Motor City speak to the heart of what we call home.

The Sundance Film Festival has introduced global audiences to some of the most groundbreaking films of the past
three decades, including
Sorry to Bother You, Won’t You Be My Neighbor?, Eighth Grade, Get
Out, The Big Sick, Mudbound, Beasts of the Southern Wild, Fruitvale Station,
Whiplash,
Brooklyn, Precious, The Cove, Little Miss Sunshine, An Inconvenient Truth,
Napoleon
Dynamite
, Hedwig and the Angry Inch, Reservoir Dogs and sex, lies, and videotape.
The
Festival is a program of the non-profit Sundance Institute®. The Festival is a program of the non-profit Sundance
Institute®. 2019 Festival sponsors include: Presenting Sponsors – Acura, SundanceTV, Chase Sapphire, YouTube;
Leadership Sponsors – Adobe, Amazon Studios, AT&T, DIRECTV, Dropbox, Netflix, Omnicom, Stella Artois; Sustaining
Sponsors – Canada Goose, Canon, Dell, Francis Ford Coppola Winery, GEICO, High West Distillery, IMDbPro, Lyft,
RIMOWA, Unity Technologies, University of Utah Health; Media Sponsors – The Atlantic, IndieWire, Los Angeles Times,
The New York Times, VARIETY, The Wall Street Journal. Sundance Institute recognizes critical support from the Utah
Governor’s Office of Economic Development, and the State of Utah as Festival Host State. The support of these
organizations helps offset the Festival’s costs and sustain the Institute’s year-round programs for independent
artists. Look for the Official Partner seal at their venues at the Festival.
sundance.org/festival

Founded in 1981 by Robert Redford, Sundance Institute is a nonprofit organization that provides and preserves the
space for artists in film, theatre, and new media to create and thrive. The Institute’s signature Labs, granting, and
mentorship programs, dedicated to developing new work, take place throughout the year in the U.S. and
internationally. The Sundance Film Festival and other public programs connect audiences to artists in igniting new
ideas, discovering original voices, and building a community dedicated to independent storytelling. Sundance
Institute has supported such projects as
Sorry to Bother You, Eighth Grade, Won’t You Be My Neighbor?,
Hereditary,
RBG, Call Me By Your Name, Get Out, The Big Sick, Top of the Lake, Winter’s Bone, Dear White People, Brooklyn,
Little Miss Sunshine, 20 Feet From Stardom, Beasts of the Southern Wild
, Fruitvale Station, I’m
Poppy, America to Me, Leimert Park, Spring Awakening
, A Gentleman’s Guide to Love and Murder and Fun
Home
. Join Sundance Institute on Facebook,
Instagram, Twitter
and YouTube.