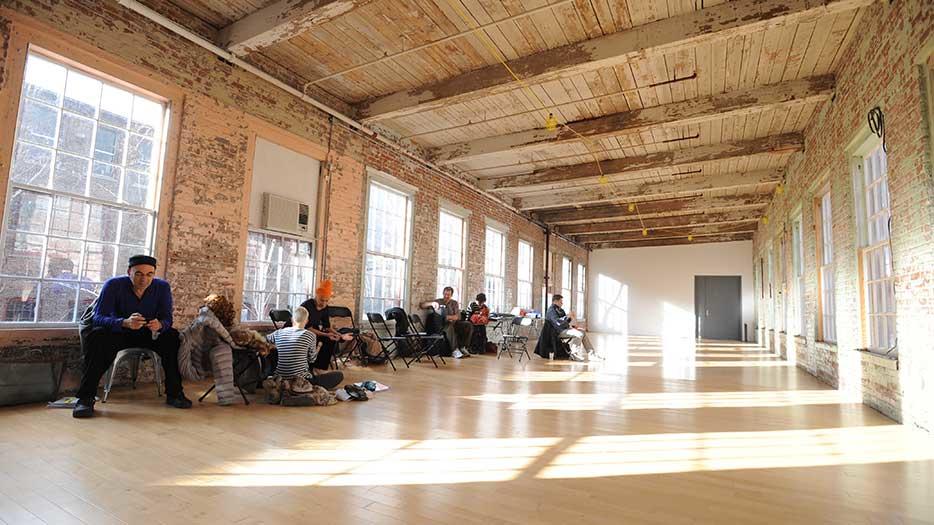 Four projects include New Work from Palestine, Australia and U.S.A.

NORTH ADAMS, MA — Four new works for the stage, with a global cohort of theatremakers, have gathered for development at the two-week Sundance Institute Theatre Lab at the Massachusetts Museum of Contemporary Art (MASS MoCA), convening December 2-16, 2018, including a public performance on December 7. The Labs process, rigorous and generative, is founded on concentrated and abundant time and resources; projects are cast individually and rehearsed daily.

Philip Himberg, Director of Sundance Institute’s Theatre Program, said “This year’s Lab slate reflects an extraordinary range of global theatrical storymaking, and provides theatre artists from diverse cultures the rare opportunity to meet and interact. Our collaboration with MASS MoCA underlines how a setting that embodies visual expression and storytelling can enrich the experience of developing new work for the stage.”

Recent openings of works supported at the Theatre Lab at MASS MoCA include the recent premieres of Between the World and Me and We’re Only Alive for a Short Amount of Time, in New York and Chicago, respectively; both developed at the Lab last year. The Sundance Institute Theatre Program is supported by an endowment from the Doris Duke Charitable Foundation, with generous additional support from The Andrew W. Mellon Foundation; Time Warner Foundation; Perry and Martin Granoff; Luma Foundation; National Endowment for the Arts; Wendy vanden Heuvel; John and Marcia Price Family Foundation; The Shubert Foundation, Inc.; The Harold and Mimi Steinberg Charitable Trust; Wyncote Foundation; Richenthal Foundation; The Carrie Louise Hamilton Foundation; and Francena T. Harrison Foundation.

The Conversationalists is a live-performed non-existent film. It is an original movie written by James & Jerome, described shot-by-shot by an impassioned narrator, while a chamber orchestra onstage plays the fully-realized score to the film as it is described. The movie, occurring in full only in the audience’s minds, is a melodrama about the loving, combative friendship between a Palestinian-American chess shop owner and a Colombian-Mexican ranchera star, who share a love of mystic parables. It is being created in collaboration with director Annie Tippe.

James Harrison Monaco is a storyteller, writer, and musician. He is one half of the music-storytelling duo James & Jerome. His work has been presented by Lincoln Center, The Public Theater, La MaMa, Under The Radar Festival, and the Kimmel Center for the Performing Arts, among others venues. jamesandjerome.org

Jerome Ellis is an Afro-Caribbean composer, improviser, and theater artist living in New York City. His work focuses on speech and silence, and their interrelations with disability and religion; repetition, devotion, oral storytelling, improvisation, and the interface between electronic and acoustic sound.

The Shadow Whose Prey the Hunter Becomes

By Back to Back Theatre Company

Five activists with intellectual disabilities hold a public meeting to start a frank and open conversation about a history we would prefer not to know, and a future that is ambivalent.Weaving a narrative through the ethics of mass food production, human rights, the social impact of automation and the projected dominance of artificial intelligence in the world, The Shadow Whose Prey the Hunter Becomes is about the changing nature of intelligence in contemporary society. A theatrical revelation inspired by mistakes, misreadings, misleadings and misunderstanding, Shadow reminds us that none of us are self-sufficient and all of us are responsible.

Back to Back Theatre creates new forms of contemporary performance imagined from the minds and experiences of a unique ensemble of actors with a disability, giving voice to social and political issues that speak to all people. In addition to its professional practice Back to Back collaborates intensively with communities around the world, with a focus on artistic excellence and elevated social inclusion for all people of difference. Back to Back Theatre is assisted by the Australian Government through the Australia Council and supported by the Victorian Government through Creative Victoria, the City of Greater Geelong and Creative Partnerships Australia.

Bruce Gladwin is an Australian artist and performance maker. He has been the Artistic Director of Back to Back Theatre since 1999. Bruce’s works with Back to Back Theatre have toured extensively, including presentations at the world’s preeminent contemporary arts festivals and cultural venues. In 2015, Bruce was awarded the Australia Council for the Arts’ Inaugural Award for Outstanding Achievement in Theatre.

This is a collective theatre lab whose aim is the production of a theatrical work that addresses radicalism as an inherent human mode throughout a theatrical research that is divided into five stages: research and collecting stories and documentary material; treating material through two workshops of improvisation; analysis and observation in order to develop thoughts that would be transposed into the writing stage and play script development; into the hall for final rehearsals; and lastly, arriving at the final arrangement of the performance.

Bashar Murkus is a Palestinian playwright and director and founding ensemble member of the Khashabi Theatre in Haifa. His work has been seen in Palestine, France, Belgium, Tunisia, Ireland, Swiss, and the USA. Murkus studied theatre at the University of Haifa, where he now teaches acting and directing.

Diana Oh is a witch. She knows it. So do her closest friends. Clairvoyance runs in her family. She went to a spiritual counselor in the jungle in Thailand, and the spiritual counselor told her to sing and go wild in Boston. Everything else the spiritual counselor said came true, so Diana is doing it. Clairvoyance is an exchange of energy designed to bypass the bullshit and celebrate the knowledge of our bodies. It’s a concert, it’s a party, with moments of divination. Diana Oh performs her original soul, pop, rock, and punk music from journal entries and the beyond. She is one of Refinery 29’s Top 14 LGBTQ Influencers, creator of {my lingerie play}, and the first Queer Korean-American interviewed on Korean Broadcast Radio. Upworthy and The Wall Street Journal call her “Badass.” The New York Times calls her “Irreverent.” You can call her “Friend.”

Diana Oh is a multi-hyphenate generative artist. She is the creator of {my lingerie play}, 24 Hour Punk, Asian People are Not Magicans (mic.com). A Refinery29 Top LGBTQ Influencer, the First Queer Korean-American interviewed on Korean Broadcast Radio, a TOW Fellow (Rattlestick Playwrights Theatre), a Van Lier Fellow in Acting (Asian American Arts Alliance), a Venturous Capital Grant Recipient, member of The Public Theatre’s Emerging Writers Group and Ma-Yi’s Writers Lab. She is the Artist-in-Community at A.R.T./Oberon creating CLAIRVOYANCE: her monthly installations that culminates into her own solo concert she casts spells with (April 2019), Upcoming: The Infinite Love Party at Bushwick Starr in (Jan 2019). www.dianaoh.co

Mei Ann Teo (she/they) is a Singaporean theatre/film maker who works at the intersection of artistic/civic/contemplative practice. As a director/devisor/dramaturg, she collaborates across genres and the world. Mei Ann is the Producing Artistic Director of Musical Theatre Factory, a Resident Company of Playwrights Horizons.