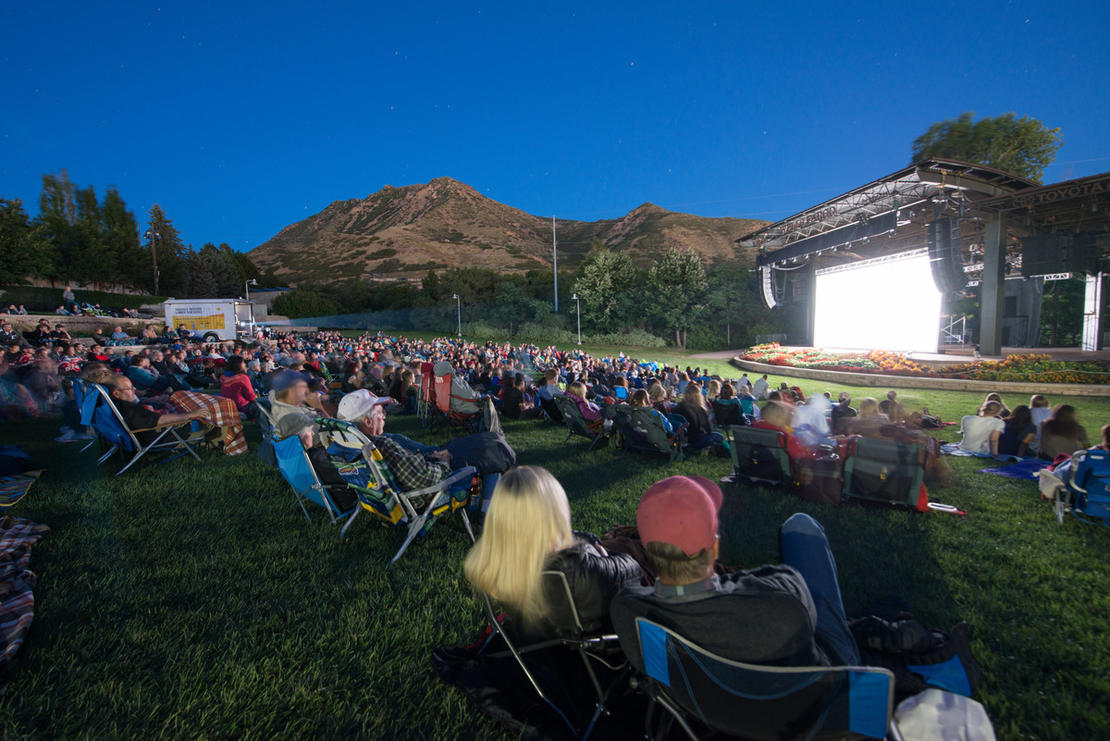 Largest-Ever Summer Film Series Showcases Utah with Eleven Sundance Favorites, Including
Butch Cassidy and the Sundance Kid, Brigsby Bear, Man on Wire and
Won’t You Be My Neighbor?

Offscreen: Visiting Filmmakers, Games, Contests and a Vote for Final Series Screening at

Betsy Wallace, CFO and Managing Director of Sundance Institute, said, “We’re very proud to be a part
of Utah, and showcasing these films, many of which were created right here, while surrounded by the natural beauty of our
state, is a highlight of our year-round programming. We look forward to sharing these great films with our friends, neighbors
and colleagues and expressing a small part of our appreciation for the state we call home.”

The series starts earlier than in previous years, on June 16, with a special showing of
Dolores as part of the Christian Center of Park City’s Latino Arts Festival. It then moves to Salt Lake City’s
Red Butte Garden on June 28 for a screening of the Utah-filmed
Brigsby Bear. This Sundance Film Festival-discovered cult comedy will include an in-person Q&A with the film’s
star and screenwriter Kyle Mooney and screenwriter Kevin Costello, as well as a possible visit from Brigsby Bear himself.
Other highlights of the series include a return showing of the classic Sundance Institute namesake
Butch Cassidy and the Sundance Kid, starring Robert Redford, the Sundance award-winning
Me and Earl and the Dying Girl, preceded by a
free concert, to which all audience members are invited and a pet-inclusive screening of
RED DOG: True Blue. Ten of the films in the series got their start at the Sundance Film Festival, and three were filmed
right here in Utah.

Back once again, by popular demand, the Utah community will be able to vote to select the final film of the series, either
online at
sundance.org/utah or onsite at screenings through mid-August. The nominees will be chosen from a selection of classic
films which were supported through Sundance Institute funding or the Sundance Filmmaker Labs in Utah, including
Bottle Rocket, Hedwig and the Angry Inch and
Whiplash.

Films start at dusk (approximately 9:00 p.m.), with gates opening and activities beginning at 7:30 p.m. unless otherwise
noted. All screenings are free and open to the public (no tickets needed) with seating on a first-come, first-served basis.
Attendees are encouraged to bring picnic baskets and blankets or low-back lawn chairs to outdoor screenings.

LaraLee Ownby, Assistant Director of Utah Community Programs for Sundance Institute, said, “We’re
excited to share our Summer Film Series this year with more cities around Utah. This year’s lineup features films
ranging from comedy to adventure to real-life drama, and with a schedule full of games and activities to go along with
these great films, these screenings will have something for everyone throughout the state.”

The Institute will again collaborate with other Utah-based organizations for the Summer Film Series, including the Utah Film
Center, Christian Center of Park City, Ogden Amphitheater and DOCUTAH International Documentary Film Festival.

For more information about Sundance Institute programming for Utah residents and to vote for the Utah Community Choice Film
visit
sundance.org/utah.

Brigsby Bear
/ (Director: Dave McCary, Screenwriters: Kevin Costello, Kyle Mooney) —
Brigsby Bear Adventures is a children’s TV show produced for an audience of one: James. When the show abruptly ends,
James’s life changes forever, and he sets out to finish the story himself.
Cast: Kyle Mooney, Claire Danes, Mark Hamill, Greg Kinnear, Matt Walsh, Michaela Watkins. Preceded by a Q&A with Kyle
Mooney and Kevin Costello, as well as a behind-the-scenes video about the filming of the movie, provided by the Utah
Film Commission.

Man on Wire
/ United Kingdom (Director: James Marsh) — In 1974, Philippe Petit, a young Frenchman, dances on a wire suspended between
New York’s Twin Towers. Consequently, Philippe is arrested and thrown into jail for what would become known as “the
artistic crime of the century.”
Winner of Academy Award for Best Documentary Feature. Preceded by outdoor activities in cooperation with Park City Recreation.

STEP
/ U.S.A. (Director: Amanda Lipitz) — The senior year of a girls high school step team in inner city Baltimore is documented,
as they try to become the first in their families to attend college. The girls strive to make their dancing a success against
the backdrop of social unrest in their troubled city.

Believer
/ U.S.A. (Director: Don Argott) — Imagine Dragons’ Mormon frontman Dan Reynolds is taking on a new mission to explore
how the church treats its LGBTQ members. With the rising suicide rate among teens in the state of Utah, his concern with
the Mormon church’s policies sends him on an unexpected path for acceptance and change.
Presented in collaboration with the Utah Film Center. Preceded by a Q&A with director Don Argott as well as information
booths from local suicide prevention and LGBTQ support organizations.

Butch Cassidy and the Sundance Kid
/ U.S.A. (Director: George Roy Hill, Screenwriter: William Goldman) — The classic film starring Robert Redford and Paul
Newman as the real life bank-robbing duo. Follow Butch and Sundance as their adventures take them from Colorado, through
right here in Utah and down to Bolivia as they attempt to live their outlaw lives on their own terms.
Cast: Paul Newman, Robert Redford, Katherine Ross.
Winner of four Academy Awards. Presented in collaboration with Ogden Amphitheater. Gates open at 6:00 p.m., film starts
at 7:30 p.m.

RED DOG: True Blue
/ Australia (Director: Kriv Stenders, Screenwriter: Daniel Taplitz) — When 11-year-old Mick is shipped off to his grandfather’s
cattle station in Australia’s remote Pilbara region, he prepares himself for a life of dull hardship but instead
finds myth, adventure, and a friendship with a scrappy, one-of-a-kind pup that will change his life forever.
Cast: Bryan Brown, Thomas Cocquerel, Jason Isaacs, Hanna Mangan-Lawrence, Levi Miller. Presented in collaboration with
Kimball Arts Center. Guests are encouraged to bring their pets.

Me and Earl and the Dying Girl
/ U.S.A. (Director: Alfonso Gomez-Rejon, Screenwriter: Jesse Andrews) — Greg is coasting through senior year of high
school as anonymously as possible, avoiding social interactions like the plague while secretly making spirited, bizarre
films with Earl, his only friend. But both his anonymity and friendship threaten to unravel when his mother forces him
to befriend a classmate with leukemia.
Cast: Thomas Mann, RJ Cyler, Olivia Cooke, Nick Offerman, Connie Britton, Molly Shannon. Preceded by a free concert by
Dusty Boxcars, presented by Mountain Town Music. Gates open at 5:30 p.m. with concert starting at 6:30 p.m. and film
at dusk.

Seeing Allred
/ U.S.A. (Directors: Sophie Sartain, Roberta Grossman) — Gloria Allred overcame trauma and personal setbacks to become
one of the nation’s most famous women’s rights attorneys. Now the feminist firebrand takes on two of the biggest
adversaries of her career, Bill Cosby and Donald Trump, as sexual violence allegations grip the nation and keep her in
the spotlight.
Show your support for women’s rights by wearing all red to the screening!

Won’t You Be My Neighbor?
/ U.S.A. (Director: Morgan Neville) — Fred Rogers used puppets and play to explore complex social issues: race, disability,
equality, and tragedy, helping form the American concept of childhood. He spoke directly to children and they responded
enthusiastically. Yet today, his impact is unclear. Have we lived up to Fred’s ideal of good neighbors?
Presented in collaboration with DOCUTAH International Documentary Film Festival. Followed by a Q&A with producer Nicholas
Ma. Doors open at 6:00 p.m., film starts at 7:00 p.m. Indoor screening.

Utah Community Choice Film — For the sixth year, Sundance Institute wants YOU to select the last film of the Summer
Film Series. Through mid-August, vote for your favorite Sundance supported film. Vote onsite at screenings or at
sundance.org/utah. The winning film will be announced in late August.

Editor’s Note: Photos and credit information for all films screening in the Summer Film Series can be found
at
sundance.org/photos. All photos are copyrighted and may be used by press only for the purpose of one-time reproduction
and only when including proper image credits and/or ‘Courtesy of Sundance Institute.’ Unauthorized use, alteration
or reproduction of logos and photos is strictly prohibited.