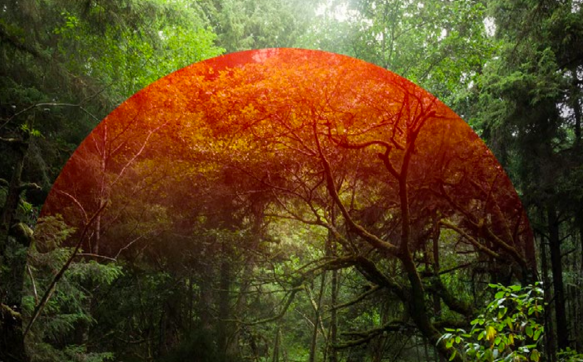 Sinclair said, “The intersection of artists and technologists at New Frontier Story Lab this year is going
to create a unique experience where the Fellows are able to challenge each other to take risks and interact with stories
in different ways. Creative Advisors and Industry Mentors will come together to explore the convergence of art and technology
and engage in ground-breaking work in the full spectrum of immersive media, connected environments and machine learning.”

Alexa, Call Mom! is a connected environment installation featuring
Alexa and other networked devices using AI as a conduit between the living and the dead. It is the seance experience
of the future!

Nitzan Bartov is a game designer and architect based in Brooklyn. In VR, interactive and spatial media, her work mixes pop
culture and sci-fi with computational design and sculptural elements, exploring representations of time and beauty in the
flaws of the digital world.

Char Simpson writes interactive fiction and designs narrative formulas for gamified texts, VR, and immersive experiences.
Her focus is stories that encourage an extranoematic interaction between the reader and text.

Changing Same: The Untitled Racial Justice Project is a magical-realist virtual reality journey through the uninterrupted cycle of
white racial oppression from slavery to now to an afro-futurist world of freedom, liberation and equity.

Michèle Stephenson pulls from her Panamanian and Haitian roots to tell provocative stories that are created by, for and about
communities of color. Stephenson’s most recent feature documentary,
American Promise, was nominated for three Emmys, garnered a Sundance Film Festival Jury Award, and won a Britdoc Puma
Award for Impact. Her collaborative short-film series with New York Times Op-Docs, Conversations on Race, won an Online
Journalism Award for Commentary.

Joe Brewster is a physician who uses his psychiatrist training to inform the social issues he tackles as a filmmaker. Brewster
has created stories using a variety of mediums that have garnered support from critics and audiences internationally. Brewster
is a Guggenheim Fellow and Spirit Award and three-time Emmy Award nominee. His recent documentary,
American Promise, won the Jury Prize at Sundance Film Festival. Brewster’s outreach accomplishments include
a NAACP Image Award for his book
Promises Kept, and a BritDoc Prize for developing one of the most innovative outreach campaigns.

After a series of miscarriages, a young woman is convinced her children were born into another dimension. Through virtual reality, this story of loss, fear and reunion penetrates the unseen portal between worlds.

Raqi Syed is a writer and artist who has worked on films such as
Tangled,
District 9,
Avatar,
Dawn of The Planet of the Apes, and
The Hobbit Trilogy. In 2017,
The Los Angeles Times pegged Syed for its list of 100 Industry professionals who can help fix Hollywood’s diversity
problem. Syed’s writing focuses on film and gender, film technology, the historiography of visual effects, and the
business of visual effects. Her essays have appeared in
TechCrunch, Vice, Salon, Quartz, and
The Los Angeles Review of Books.

Areito Echevarria is an Academy Award winning artist and researcher, specializing in computational creativity and design.
His feature film experience includes work on films such as
War for the Planet of the Apes,
Godzilla,
The Hobbit Trilogy,
Avatar and
Black Hawk Down. In 2014, Echevarria was awarded the Scientific and Technical Academy Award for his work developing
Deep Compositing, an imaging technology that fundamentally changed the nature of compositing workflows in the feature film
industry.


Not The Only One

Not the Only One is the multigenerational memoir of one black American family told from the mind of an artificial
intelligence of evolving intellect.

Stephanie Dinkins is a transdisciplinary artist interested in creating platforms for ongoing dialog about artificial intelligence
as it intersects race, gender, aging, the proliferation of knowledge(s) and our future histories. She is particularly driven
to work with communities of color to develop deep-rooted AI literacy and co-create more equitable artificial intelligence.

Sadé Dinkins is passionate about social justice and the need for a future that reflects us, as representation has growing
effect on the human psyche, public policy. She has an external drive to seek and establish representation for blackness
and women in media as well as in the technological sector as it increasingly intersects our lives.

Circle the Mugumo tree seven times and transform from masculine to feminine or feminine to masculine; and live in your new
identity forever. This is the ritual of the Kikuyu ancestors that no contemporary person has experienced until now, in virtual reality.

Shariffa Chelimo Ali is an Afropolitan creative leader committed to working with an open-heart at the intersection of the
performing arts and humanitarianism. Ali works as a Community Coordinator at the Public Theater in New York. Selected directing
credits include:
Detroit 67 (Brooklyn College, NY),
We are Proud to Present…(Yale Dramatic Society, Yale University, CT),
Eclipsed (Lewis Center for the Arts, Princeton University, NJ),
The Year of the Bicycle (C.M.O.R.E Festival, The Cell Theatre, NY) and
Evolve | Revolve (formerly known as Round Round, VR film), winner of the Digital Lab Africa Competition.

Yetunde Dada’s background is in photography, design and technology and she is currently completing her MBA at the Said
Business School, University of Oxford. She passionate about using art and technology for social change and founded a social
impact art, design and music magazine called
Our Friends.

Unearth stories by speaking with the witnesses, family members, detectives and towns people who lived the nightmares of this
True Crime series. Using artificial intelligence natural language processing, these conversational documentaries put the viewer face to face with the subjects in virtual reality and lets them ask
the questions to discover the multifaceted truth.

Kevin Cornish, director of cinematic immersive experiences, is the CEO and Co-Founder of Conversive, an immersive conversation
engine, and the founder of Moth+Flame agency. Cornish has created immersive experiences for AMC’s
The
Walking Dead and
Pandas AR for IMAX, which allows kids to have conversations with a talking panda in augmented reality. He’s
also the creator of
Fall in Love, an AI-powered VR experience inspired by
The New York Times article “36 Questions to Fall in Love,” which was shortlisted for an Innovation Lion
at Cannes and uses natural language processing to enhance first-person storytelling.

Seyward Darby is a magazine editor who specializes in longform narrative nonfiction. Currently, she is the executive editor
of
The Atavist Magazine, an award-winning publication that delivers cinematic true stories featuring in-depth reporting,
compelling writing and the most elegant design on the web. She is also a writer and is currently working on a book about
how women have shaped white nationalism in America (Little, Brown, 2020).

Founded in 1981 by Robert Redford, Sundance Institute is a nonprofit organization that provides and preserves the space
for artists in film, theatre, and new media to create and thrive. The Institute’s signature Labs, granting, and mentorship
programs, dedicated to developing new work, take place throughout the year in the U.S. and internationally. The Sundance
Film Festival and other public programs connect audiences to artists in igniting new ideas, discovering original voices,
and building a community dedicated to independent storytelling. Sundance Institute has supported such projects as
Mudbound, Get Out, The Big Sick, Strong Island, Blackfish, Top of the Lake, Winter’s Bone, The Wolfpack, Dear White People,
Trapped, Brooklyn, Little Miss Sunshine, 20 Feet From Stardom, Beasts of the Southern Wild, Fruitvale Station, Spring
Awakening, A Gentleman’s Guide to Love
and
Murder and Fun Home. Join
Sundance Institute on
Facebook,
Instagram,
Twitter and
YouTube.