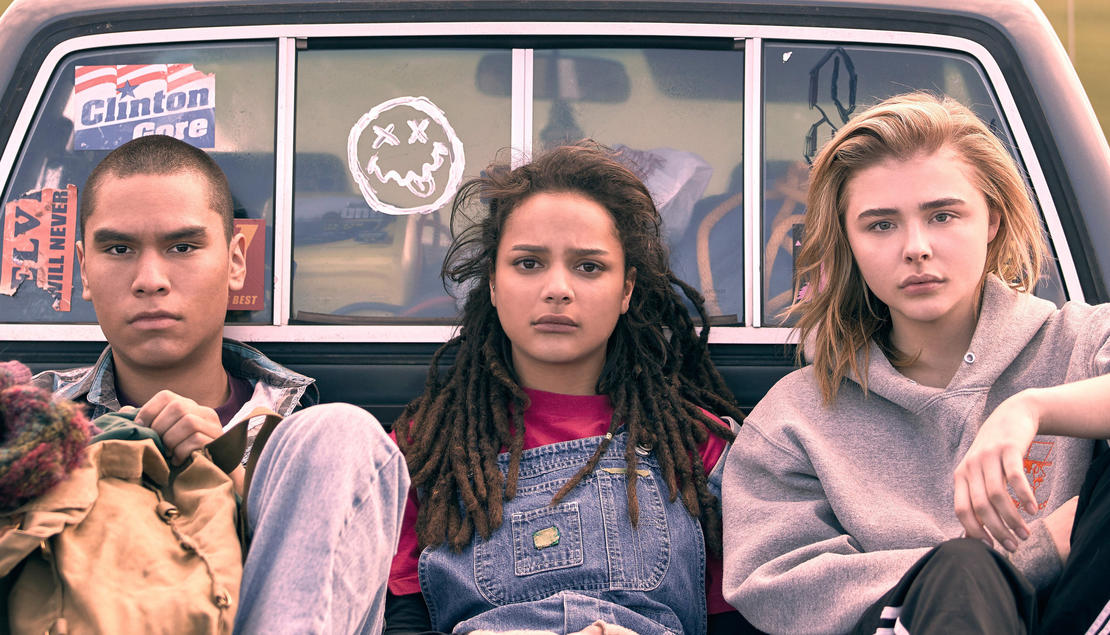 Top Prizes Go To
The Miseducation of Cameron Post, Kailash, Of Fathers and Sons, and
Butterflies


Search, Burden, The Sentence and
The Guilty Win Audience Awards

“From the beginning, the purpose of the Sundance Film Festival has been to support artists and their stories,”
said Sundance Institute President and Founder
Robert Redford, “and this year, our mission seemed especially relevant. Supporting independent voices, and
listening to the stories they tell, has never been more necessary.”

“The scope and scale of this year’s Festival — films, events, conversations — were invigorating,” said
Keri Putnam, the Institute’s Executive Director. “I can’t wait to see how our incredible community will leverage
these ten days of connection and inspiration to make art and change in the coming year.”

“This Festival has been extraordinary,” said
John Cooper, Sundance Film Festival Director. “It’s been a pleasure to stand shoulder-to-shoulder with
these artists, and to see their work charm, challenge and galvanize its first audiences.”

The awards ceremony marked the culmination of the 2018 Festival, where 123 feature-length and 69 short films — selected from
13,468 submissions — were showcased in Park City, Salt Lake City and Sundance, Utah, alongside work in the new Indie Episodic
category, panels, music and New Frontier. The ceremony was live-streamed; video is available at
youtube.com/sff.

Feature film award winners in previous years include:
I don’t feel at home in this world anymore., Weiner,
Whiplash, Fruitvale Station, Beasts of the Southern Wild, Twenty Feet from Stardom, Searching for Sugarman, The Square,
Me and Earl and the Dying Girl, Cartel Land, The Wolf Pack, The Diary of a Teenage Girl, Dope, Dear White People, The
Cove
and
Man on Wire.

The
U.S. Grand Jury Prize: Documentary was presented by Simon Chin to:


Kailash
/ U.S.A. (Director: Derek Doneen, Producers: Davis Guggenheim, Sarah Anthony) — As a young man, Kailash Satyarthi promised
himself that he would end child slavery in his lifetime. In the decades since, he has rescued more than eighty thousand
children and built a global movement. This intimate and suspenseful film follows one man’s journey to do what many
believed was impossible.

The
U.S. Grand Jury Prize: Dramatic was presented to:

The
World Cinema Grand Jury Prize: Documentary was presented by Joselyn Barnes to:


Of Fathers and Sons
/ Germany, Syria, Lebanon, Qatar (Director: Talal Derki, Producers: Ansgar Frerich, Eva Kemme, Tobias N. Siebert, Hans
Robert Eisenhauer) — Talal Derki returns to his homeland where he gains the trust of a radical Islamist family, sharing
their daily life for over two years. His camera focuses on Osama and his younger brother Ayman, providing an extremely
rare insight into what it means to grow up in an Islamic Caliphate.

The
World Cinema Grand Jury Prize: Dramatic was presented by Ruben Ostlund to:


Butterflies
/ Turkey (Director and screenwriter: Tolga Karaçelik, Producers: Tolga Karaçelik, Diloy Gülün, Metin Anter) — In
the Turkish village of Hasanlar, three siblings who neither know each other nor anything about their late father, wait
to bury his body. As they start to find out more about their father and about each other, they also start to know more
about themselves.

The
Audience Award: U.S. Documentary, Presented by Acura was presented to:

The
Audience Award: U.S. Dramatic, Presented by Acura was presented to:


Burden
/ U.S.A. (Director and screenwriter: Andrew Heckler, Producers: Robbie Brenner, Jincheng, Bill Kenwright) — After opening
a KKK shop, Klansman Michael Burden falls in love with a single mom who forces him to confront his senseless hatred. After
leaving the Klan and with nowhere to turn, Burden is taken in by an African-American reverend, and learns tolerance through
their combined love and faith.
Cast:
Garrett Hedlund, Forest Whitaker, Andrea Riseborough, Tom Wilkinson, Usher Raymond.

The
Audience Award: World Cinema Documentary was presented to:


This Is Home
/ U.S.A., Jordan (Director: Alexandra Shiva, Producers: Lindsey Megrue, Alexandra Shiva) — This is an intimate portrait
of four Syrian families arriving in Baltimore, Maryland and struggling to find their footing. With eight months to become
self-sufficient, they must forge ahead to rebuild their lives. When the travel ban adds further complications, their strength
and resilience are put to the test.

The
Audience Award: World Cinema Dramatic was presented to:


The Guilty
/ Denmark (Director: Gustav Möller, Screenwriters: Gustav Möller, Emil Nygaard Albertsen, Producer: Lina Flint) — Alarm
dispatcher Asger Holm answers an emergency call from a kidnapped woman; after a sudden disconnection, the search for the
woman and her kidnapper begins. With the phone as his only tool, Asger enters a race against time to solve a crime that
is far bigger than he first thought.
Cast: Jakob Cedergren, Jessica Dinnage, Johan Olsen, Omar Shargawi.

The
Audience Award: NEXT, Presented by Adobe was presented to:

The
Directing Award: U.S. Documentary was presented by Ezra Edelman to:

Alexandria Bombach for her film

/ U.S.A. (Director: Alexandria Bombach, Producers: Hayley Pappas, Brock Williams) — Nadia Murad, a 23-year-old Yazidi,
survived genocide and sexual slavery committed by ISIS. Repeating her story to the world, this ordinary girl finds herself
thrust onto the international stage as the voice of her people. Away from the podium, she must navigate bureaucracy, fame
and people’s good intentions.

The
Directing Award: U.S. Dramatic was presented to:

Sara Colangelo, for her film

The
Directing Award: World Cinema Documentary was presented by Paulina Suarez to:

Sandi Tan, for her film

The
Directing Award: World Cinema Dramatic was presented by Michael J. Werner to:

And Breathe Normally
/ Iceland, Sweden, Belgium (Director and screenwriter: Ísold Uggadóttir, Producers: Skúli Malmquist, Diana Elbaum, Annika
Hellström, Lilja Ósk Snorradóttir, Inga Lind Karlsdóttir) — At the edge of Iceland’s Reykjanes peninsula, two
women’s lives will intersect – for a brief moment – while trapped in circumstances unforeseen. Between a struggling
Icelandic mother and an asylum seeker from Guinea-Bissau, a delicate bond will form as both strategize to get their lives
back on track.
Cast: Kristín Thóra Haraldsdóttir, Babetida Sadjo, Patrik Nökkvi Pétursson.

The
Waldo Salt Screenwriting Award: U.S. Dramatic was presented to:

Christina Choe, for her film

A
U.S. Documentary Special Jury Award for Creative Vision was presented by Matt Holzman to:


Hale County This Morning, This Evening
/ U.S.A. (Director: RaMell Ross, Screenwriter: Maya Krinsky, Producers: Joslyn Barnes, RaMell Ross, Su Kim) — Composed
of intimate and unencumbered moments of people in a community, this film is constructed in a form that allows the viewer
an emotive impression of the Historic South – trumpeting the beauty of life and consequences of the social construction
of race, while simultaneously a testament to dreaming.

A
U.S. Documentary Special Jury Award for Social Impact was presented by Chaz Ebert to:


Crime + Punishment
/ U.S.A. (Director: Stephen Maing) — Over four years of unprecedented access, the story of a brave group of black and Latino
whistleblower cops and one unrelenting private investigator who, amidst a landmark lawsuit, risk everything to expose illegal
quota practices and their impact on young minorities.

A
U.S. Documentary Special Jury Award for Storytelling was presented by Chaz Ebert to:

A
U.S. Documentary Special Jury Award for Breakthrough Filmmaking was presented by Barbara Chai to:

A
U.S. Dramatic Special Jury Award for Excellence in Filmmaking was presented by Michael Stulhbarg to:

A
U.S. Dramatic Special Jury Award for Achievement in Acting was presented by Michael Stulhbarg to:

A
World Cinema Documentary Special Jury Award was presented by Billy Luther to:

Stephen Loveridge and M.I.A., for

A
World Cinema Documentary Special Jury Award for Editing was presented by Paulina Suarez to:

A
World Cinema Documentary Special Jury Award for Cinematography was presented by Billy Luther to:

Genesis 2.0
/ Switzerland (Directors: Christian Frei, Maxim Arbugaev, Producer: Christian Frei) — On the remote New Siberian Islands
in the Arctic Ocean, hunters search for tusks of extinct mammoths. When they discover a surprisingly well-preserved mammoth
carcass, its resurrection will be the first manifestation of the next great technological revolution: genetics. It may
well turn our world upside down.

A
World Cinema Dramatic Special Jury Award for Screenwriting was presented by Michael J. Werner to:

A
World Cinema Dramatic Special Jury Award for Acting was presented by Hanaa Issa to:

A
World Cinema Dramatic Special Jury Award for Ensemble Acting was presented by Hanaa Issa to:

The
NEXT Innovator Prize was announced as a tie, and was presented by juror RuPaul Charles to two films:


We the Animals
/ U.S.A. (Director: Jeremiah Zagar, Screenwriters: Daniel Kitrosser, Jeremiah Zagar, Producers: Jeremy Yaches, Christina
D. King, Andrew Goldman, Paul Mezey) — Us three, us brothers, us kings. Manny, Joel and Jonah tear their way through childhood
and push against the volatile love of their parents. As Manny and Joel grow into versions of their father and Ma dreams
of escape, Jonah, the youngest, embraces an imagined world all his own.
Cast: Raul Castillo, Sheila Vand, Evan Rosado, Isaiah Kristian, Josiah Gabriel.

Jury prizes and honorable mentions in short filmmaking were presented at a ceremony in Park City on January 23. The Short
Film Grand Jury Prize was awarded to:

Would You Look at Her
/ Macedonia (Director and screenwriter: Goran Stolevski). The Short Film Jury Award: Nonfiction was presented to:

The recipients of Sundance Institute Open Borders Fellowship presented by Netflix, announced January 26, are three of
the most exciting emerging filmmakers from the world cinema stage working in both narrative and nonfiction. The recipients
are:

The 2018 Alfred P. Sloan Feature Film Prize, presented to an outstanding feature film about science or technology, was
presented to Aneesh Chaganty and Sev Ohanian’s

Search
. The filmmakers received a $20,000 cash award from Sundance Institute with support from the Alfred P. Sloan Foundation.

The Sundance Film Festival has introduced global audiences to some of the most groundbreaking films of the past three
decades, including
Boyhood,
Beasts of the Southern Wild,
Fruitvale Station,
Whiplash,
Brooklyn,
Twenty Feet from Stardom,
Life Itself,
The Cove,
The End of the Tour,
Blackfish,
Me and Earl and the Dying Girl,
Dope,
Little Miss Sunshine,
sex, lies, and videotape,
Reservoir Dogs,
Hedwig and the Angry Inch,
An Inconvenient Truth,
Precious and
Napoleon Dynamite. The Festival is a program of the non-profit Sundance Institute®. The Festival is a program of the
non-profit Sundance Institute®. 2018 Festival sponsors include: Presenting Sponsors – Acura, SundanceTV, and Chase Sapphire®;
Leadership Sponsors – Adobe, Amazon Studios, AT&T, DIRECTV, Dropbox, Omnicom, Stella Artois® and YouTube; Sustaining
Sponsors – Canada Goose, Canon U.S.A., Inc., Dell, Francis Ford Coppola Winery, GEICO, Google Pixel 2, Grey Goose Vodka,
High West Distillery, IMDbPro, Lyft, Unity Technologies and the University of Utah Health; Media Sponsors – Los Angeles
Times, The New York Times and Variety. Sundance Institute recognizes critical support from the Utah Governor’s Office of
Economic Development, and the State of Utah as Festival Host State. The support of these organizations helps offset the
Festival’s costs and sustain the Institute’s year-round programs for independent artists. Look for the Official Partner
seal at their venues at the Festival. sundance.org/festival

Founded in 1981 by Robert Redford, Sundance Institute is a nonprofit organization that provides and preserves the space
for artists in film, theatre, and new media to create and thrive. The Institute’s signature Labs, granting, and mentorship
programs, dedicated to developing new work, take place throughout the year in the U.S. and internationally. The Sundance
Film Festival and other public programs connect audiences to artists in igniting new ideas, discovering original voices,
and building a community dedicated to independent storytelling. Sundance Institute has supported such projects as
Beasts of the Southern Wild,
Fruitvale Station,
Sin Nombre,
The Invisible War,
The Square,
Dirty Wars,
Spring Awakening,
A Gentleman’s Guide to Love and Murder and
Fun Home. Join
Sundance Institute on
Facebook,
Instagram,
Twitter and
YouTube.