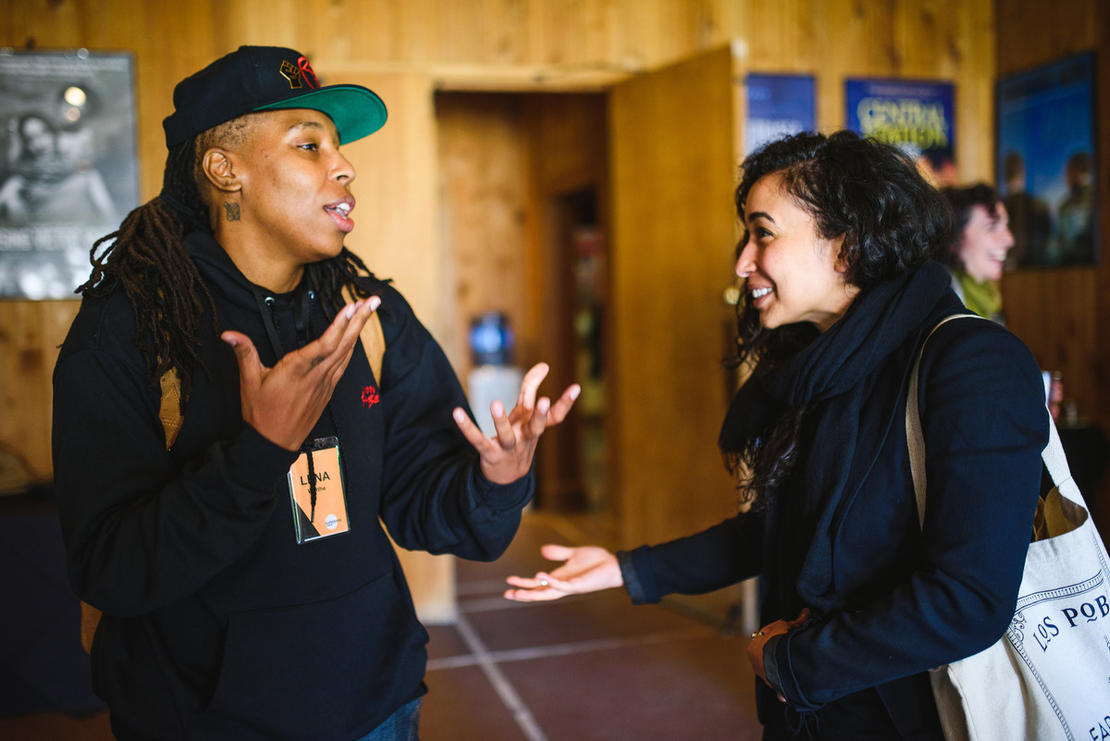 Los Angeles — Sundance Institute has selected nine original television pilots for support at its
fifth annual Episodic Lab, which runs from September 27 to October 2 at the Sundance Mountain Resort in Utah. With
topics and formats ranging from half-hour comedies about friendships put to the test to historical dramas about the
struggle for Native American land sovereignty, the broad scope of this year’s projects – and the diverse backgrounds
of their creators – speak to the Institute’s long-term support of the episodic format. The Episodic Lab is the
centerpiece of the Institute’s year-round continuum of support for emerging television writers.

“Identifying and championing emerging independent voices has always been the Institute’s focus, and we are
thrilled to continue the expansion of our support for artists working in this space,” said Satter.
“The episodic format lends itself to telling richly creative and multifaceted stories, and this Lab enables
these visionary writers to continue developing their craft and connect to the industry.”

“As we head into our fifth installment of the Episodic Lab, we are seeing many of our past Fellows staffed on
new shows and selling their pilots, which is hugely exciting in this moment of ‘peak TV’ and a testament to the
work we’re aiming to accomplish,” Goyne Blake added.

The 2018 Episodic Lab projects and fellows are:

The lives of a young Comanche girl and a former Texas Ranger collide when a conflict over land rights threatens to
upend the fragile state of a newly formed Oklahoma reservation.

Nathan Pesina is a writer from Texas, currently based in Los Angeles. He earned his MFA in
Screenwriting at the University of Texas at Austin and was the winner of the 2017 ATX Television Festival Pitch
Competition. He was a writers’ assistant on the AMC original series Silent History and co-hosts the podcast
Film Court.

Stormy Proctor has one shot at becoming the first woman bull rider on the professional rodeo circuit, but she’ll have
to face rough bulls, hard cowboys, and her personal demons along the way.

Hilary Bettis is an award-winning playwright based in Brooklyn. After graduating from The Juilliard
School’s playwriting program in 2015, she wrote on the Emmy-nominated series The Americans for the final two
seasons and was nominated for the 2018 WGA Award. She has developed and sold multiple original TV shows and is
currently adapting the Colombian hit-series La Niña for the US with FX and Propagate producing. Her other
life passion is riding horses, which she’s been doing since she was three.

Two best friends, one gay, one straight, live the high life as cruise ship performers, but their bromance is
put to the test when a new, uptight lead singer joins their cast.

Josh Kirby received a BFA in acting from Florida State University. He then pursued a career in
musical theater, performing as a cruise ship singer for a year. There, he met his writing partner Jon, another
performer on the ship. Once arriving in Los Angeles, he attended the Groundlings and quickly decided to pursue a
career in writing. He and his partner Jon worked on ABC’s The Real O’Neals and are currently working on
ABC’s Fresh Off the Boat.

Jonathan Veles is a Hawaii native who moved to LA after studying creative writing, drama, and
musical theatre at UH. Following a short stint as a professional dancer on a cruise ship, he set his sights back on his true
passion, writing. Since then, Jonathan and his writing partner Josh have worked on ABC’s The Real O’Neals
and are currently working on ABC’s Fresh Off the Boat.

Two Indian-American teenage girls, one rich, one poor, become romantically entangled with a wealthy young man prone
to self-destruction. Based on the classic Indian novel Devdas.

Tanuj Chopra’s first feature film, Punching at the Sun, about South Asian teenagers coming
of age in post-9/11 Queens, premiered at the 2006 Sundance and Tribeca Film Festivals and won the Grand Jury Prize at
the San Francisco International Asian American Film Festival. He went on to direct the award-winning feature films
Grass and Chee and T, and was selected for both the Fox and Sony Directors’ Labs. He is a graduate
of Brown University and Columbia Film School.

Meera Menon is a Jersey-born, LA-based filmmaker whose directing credits include the feature films
Equity (2016 Sundance Film Festival) and Farah Goes Bang (Nora Ephron Prize winner, 2013 Tribeca
Film Festival), as well as the television shows Glow, Halt and Catch Fire, The Magicians,
Man in the High Castle, and Snowfall. She is a graduate of Columbia University and USC’s School of
Cinematic Arts, and was a 2014 fellow of the Fox Global Directors Initiative.

Faux Ever is a half-hour dramedy about Daniela, a fiercely feminist writer, who agrees to a green-card
marriage with Logan, a recently-widowed Irish man, in order to get her traditional Mexican family off her back.

Elena Crevello is a writer and performer originally from Santa Cruz, CA, currently based in Los
Angeles. She graduated from NYU’s Tisch School of the Arts with a B.F.A. in Drama and studied improv extensively at
both U.C.B. and Groundlings. In 2012, Elena co-created and starred in the viral video “Shit People Say in
L.A.” and has since developed scripts with ABC Studios, NBC, U.C.P., and Warner Brothers. She is currently
writing on the second season of the Starz show Vida.

After going bankrupt and losing her home, an ex–beauty queen and single mother of three reinvents herself by
starting a local pageant school that threatens to tear her family apart.

Wei Ling Chang is a New York-brewed, Los Angeles-based swim addict, sleep enthusiast, and
writer/director. Her feature directorial debut, The Unlikely Girl, was acquired by Netflix for worldwide
distribution. She has been a fellow of Tribeca All Access, PGA Diversity Program, NYC MOME Lab, and the Kyoto
Filmmakers Lab. Before going narrative, she produced, wrote, and directed unscripted TV shows.

Jonesin’ is a half hour comedy about Nick and Mel, two newly-single parents, whose budding relationship is
put to the test by the daily grind of life in LA with children and co-parents in tow.

Nick Jones Jr. served 12 years in the United States Marine Corps where a chance mentorship with
President Barack Obama led him to the film industry. He holds a Bachelor of Fine Arts in Filmmaking from the New York
Film Academy, where he wrote and directed the award-winning short film Cold Choices,” starring Neil Brown Jr.
Nick later wrote on season 4 of the critically-acclaimed and Golden Globe-nominated Hulu series Casual and,
most recently, signed an exclusive blind deal at Paramount Players. He is currently prepping his feature directorial
debut, Impressions, starring Andre Holland and Navid Negahban.

A half-hour comedy about a Colombian-born woman who reluctantly invites her estranged, homeless father into the
apartment she shares with her wife and son.
Mary Angélica Molina is a Colombian-born, Brooklyn-based writer and director who creates dark,
funny, queer, intersectional stories about Latinxs. Her most recent short, “Valentina,” played sold-out
screenings along the festival circuit and is available worldwide via HBO. Earlier this year, she wrote, directed, and
produced the web series Dichos, featuring an impressive selection of NYC’s female-identified comedy talents.

Stubs is a half-hour comedy about a raunchy, foul-mouthed amputee who cons his way through his new job
coaching a girls’ high school softball team.

Lindsay Golder grew up in Texas and received a MFA in Screenwriting from the American Film
Institute. She currently writes on the CW’s In the Dark. She previously wrote on The Mick, School
of Rock, and for the popular YouTube channel Wisecrack. The Script Lab named her one of the Top 25
Emerging Screenwriters of 2017.

Sundance Institute
Founded in 1981 by Robert Redford, Sundance Institute is a nonprofit organization that provides and preserves the
space for artists in film, theatre, and new media to create and thrive. The Institute’s signature Labs, granting, and
mentorship programs, dedicated to developing new work, take place throughout the year in the U.S. and
internationally. The Sundance Film Festival and other public programs connect audiences to artists in igniting new
ideas, discovering original voices, and building a community dedicated to independent storytelling. Sundance
Institute has supported such projects as Mudbound, Get Out, The Big Sick, Strong Island, Blackfish, Top of the
Lake, Winter’s Bone, The Wolfpack, Dear White People, Trapped, Brooklyn, Little Miss Sunshine, 20 Feet From
Stardom, Beasts of the Southern Wild, Fruitvale Station, I’m Poppy, America to Me, Leimert Park,
Spring Awakening, A Gentleman’s Guide to Love and Murder and Fun Home. Join
Sundance Institute on Facebook,
Instagram, Twitter and
YouTube.