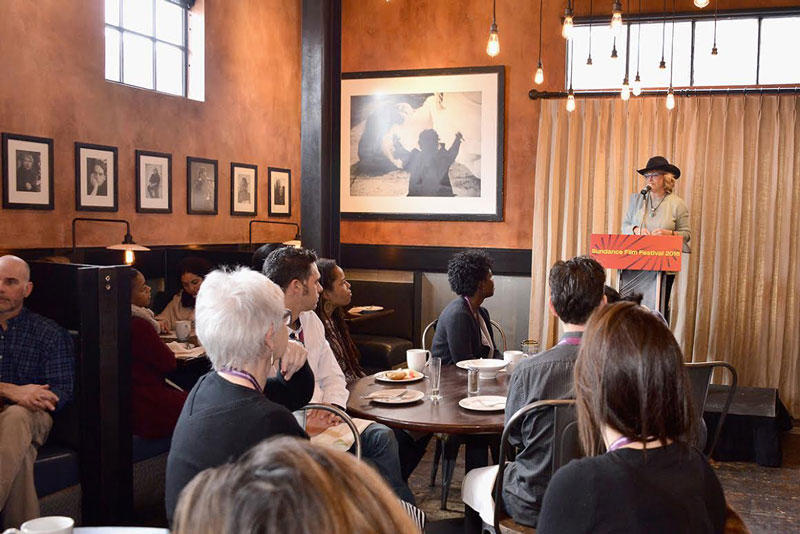 From the Sundance Institute Foundations Brunch. Photo by Ryan Kobane

Park City, UT — Sundance Institute and The Will & Jada Smith Family Foundation will collaborate to support diverse independent artists, they announced today at a reception at the 2017 Sundance Film Festival. As part of a two-year commitment, the Foundation will support the Institute’s Screenwriters Intensive and year-round work with diverse independent filmmakers and artists.

The Screenwriters Intensive, part of the Institute’s Feature Film Program, provides the opportunity for 10 emerging screenwriters from underrepresented communities to hone their craft in a two-day workshop focused deeply on the creative process. It works in partnership with the Institute’s Diversity Initiative, which emphasizes diversity as a longstanding and core value of all Institute programs. The Initiative encompasses efforts to reach new communities of storytellers and artists across regions, genres, ethnicities, genders and orientations.

“Sundance is proud to work with storytellers from a wide range of backgrounds and experiences, both at the Festival and in our artist development programs,” said Keri Putnam, Executive Director of Sundance Institute. “We are so grateful for the generous support of The Will & Jada Smith Family Foundation. Together, we will build momentum and awareness about the need to create a film and media landscape that reflects the full richness and diversity of our culture.”

“We are honored and energized to collaborate with Sundance Institute to cultivate stories and storytellers reflective of the world at large, and we view today as the beginning of a productive, purposeful and powerful alignment with an enduring institution,” said Jada Pinkett Smith.

For over two decades, The Will & Jada Smith Family Foundation has generously supported individuals and organizations dedicated to advancement in the areas of education, health, sustainability and arts. The Foundation’s new initiative, Careers in Entertainment(CIE), introduces youth to careers in the media and entertainment industry through mentorship and internship opportunities. CIE enables students to learn from the industry’s most creative and successful leaders across television, film and music.

The Institute’s support for diverse artists extends throughout its more than 35-year history. Artists supported by the Institute include Ava DuVernay, Robert Rodriguez, Ryan Coogler, Lee Daniels, Alfonso Gomez-Rejon and Dee Rees. Current programs include Fellowships for Latino and Asian-American artists. The Institute’s formalized Diversity Initiative was created with founding support from the Time Warner Foundation.

Sundance Institute
Founded in 1981 by Robert Redford, Sundance Institute is a nonprofit organization that provides and preserves the space for artists in film, theatre, and new media to create and thrive. The Institute’s signature Labs, granting, and mentorship programs, dedicated to developing new work, take place throughout the year in the U.S. and internationally. The Sundance Film Festival and other public programs connect audiences to artists in igniting new ideas, discovering original voices, and building a community dedicated to independent storytelling. Sundance Institute has supported such projects as Beasts of the Southern Wild, Fruitvale Station, Sin Nombre, The Invisible War, The Square, Dirty Wars, Spring Awakening, A Gentleman’s Guide to Love and Murder and Fun Home. JoinSundance Institute onFacebook,Instagram,Twitter andYouTube.