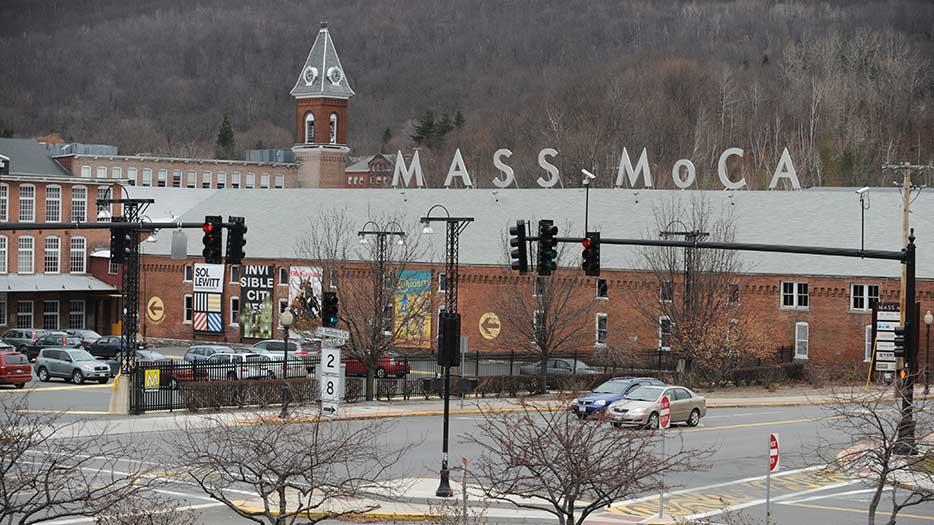 Plays by David Adjmi, Youness Atbane, David Cale and Kamilah Forbes Reflect the Impact of Art and Its Possibilities

Los Angeles, CA — Four projects representing diverse world voices, each with bold and independent visions of how
art can elevate the human experience, comprise this year’s selected projects for the two-week Sundance Institute Theatre
Lab at the Massachusetts Museum of Contemporary Art (MASS MoCA), convening December 3-17, 2017, with a public performance
of another project slated for December 9. The Theatre Labs process is rigorous and generative. Dedicated to the creation
and development of forward-thinking theater; projects are cast individually, rehearsed daily and benefit from concentrated,
uninterrupted time and resources.

The projects and their makers convening represent a range of cultural backgrounds; inspirations and influences range broadly
from National Book Award-winning books (
Between the World and Me) and the romance of analog recording technology (
Stereophonic) to shattering acts of violence (
We’re Only Alive for A Short Amount of Time) and modern Arab experiences in Western artistic contexts (
Untitled Contemporary Arab Art Work in an Occidental Platform).

Philip Himberg, Director of Sundance Institute’s Theatre Program, said “Our Labs convene storytellers in inspiring environments: at MASS MoCA, that encompasses a world-class collection of contemporary art. This affords our extraordinary theatre-makers an opportunity to respond and interact with the highest level of current visual expression, as they explore and refine their own storytelling in rehearsals. Our eclectic roster of projects this year includes: performance art, oratorio, a play with songs and a solo piece, all of which excavate deeply personal struggles with what it is to become an artist and citizen of the world.”

Works supported at the Theatre Lab at MASS MoCA can be a springboard to a global stage:
36 Abbas Street, Haifa, developed at the Lab last year, premiered in Beirut this fall and last season’s
Club Diamond premiered at the 2017 Under the Radar Festival in New York.

Between the World and Me

Adapted from the book by Ta-Nehisi Coates

Developed and Directed by Kamilah Forbes

In a profound work that pivots from the biggest questions about American history and ideals to the most intimate concerns
of a father for his son, Ta-Nehisi Coates’
Between the World and Me, offers a powerful framework for understanding our nation’s history, the idea of race, and
current crisis. Co-commissioned by Apollo Theater and John F. Kennedy Center for Performing Arts World. Premiere at Apollo
Theater in April 2018.

Kamila Forbes is a director/producer and the historic Apollo Theater’s executive producer. She was associate director
of Raisin in the Sun (2014) among other Broadway shows, and is the recipient of an NAACP Image Award and a Tony. Forbes
is a co-founder of the urban arts non-profit Hi-Arts.

Talvin Wilks is a playwright, director and dramaturg based in New York City and Minneapolis. He has served as
co-writer/co-director/dramaturg for ten productions in Ping Chong’s ongoing series of
Undesirable Elements and three productions of
Collidescope: Adventures in Pre- and Post-Racial America. He was the company dramaturg for six collaborations with
the Bebe Miller Company including
Landing/Place for which he received a 2006 Bessie Award. Other dramaturgical collaborations include work with Camille
A. Brown and Dancers, Urban Bush Women, Ain Gordon and Baba Israel. For 2017, he celebrates his role as the co-writer,
co-conceiver, and dramaturg for the world premiere of
As I Remember It with 2017 Kennedy Center Honoree Carmen de Lavallade and director of the world premiere of
The Peculiar Patriot by Lisa Jessie Peterson.

Lauren Whitehead is a writer, performer and MFA recipient in Dramaturgy (Columbia University). She has had a number
of play readings and her writings have been published in
Apogee,
Winter Tangerine and selected anthologies. Most recently, Lauren originated the role of “Un/Sung” in the opera “We
Shall Not Be Moved” (Wilma Theater, The Apollo, Dir. Bill T. Jones). She teaches playwriting and dramaturgy at The New
School.

Jason Moran is a pianist, composer and educator. He has produced ten albums and six film soundtracks, including
scores for Ava DuVernay’s
Selma and
13th. In 2007, Moran was commissioned to created
IN MY MIND: Monk at Town Hall, 1959. Recent releases include
The Armory Concert (2016),
Thanksgiving at the Vanguard (2017),
BANGS (2017),
MASS (Howl, eon) under his own label Yes Records. In 2010 Moran was awarded a MacArthur fellowship and is the Artistic
Director for Jazz at The Kennedy Center.

Music by Will Butler

It’s 1975, and Reg and Holly are in the middle of an ugly, painful breakup, though they won’t go their separate ways. They’ll
see each other every day in the sound room – along with the other members of the band, who are about to record the album
of their lives. Set in the heyday of analog recording,
Stereophonic looks at the sacrifices human beings make to achieve greatness. Commissioned by Center Theatre Group.

David Adjmi‘s plays, which include
Marie Antoinette, Elective Affinities, 3C, Stunning and
The Evildoers, have been produced at such theatres at Steppenwolf, Lincoln Center, the Royal Court, the R.S.C and
Soho Rep. He was awarded a Mellon Fellowship, the Guggenheim Fellowship, the Whiting Award, and the Steinberg Playwright
Award (the “Mimi”) among others. David’s new play collection will be published by TCG in the fall of 2017, and his untitled
memoir is forthcoming from Harper Collins.

We’re Only Alive for A Short Amount of Time

Written and Performed by David Cale

Growing up in an ugly English industrial town, writer and performer David Cale escaped the volatility of his parents’ marriage
by singing Petula Clark songs and tending to the tropical birds in the Bird and Animal Hospital he built in a garden shed
– until a violent act changed everything. Weaving together original songs, family members portraits and narrative storytelling,
Cale embodies a vivid tale of learning to live when death is suddenly everywhere.
We’re Only Alive for A Short Amount of Time was developed, in part, at SPACE on Ryder Farm and at a retreat at the
Weston Playhouse, Weston, Vermont.

David Cale is the writer and performer of solo works including the Obie Award winning
Lillian (Playwrights Horizons),
Deep in a Dream of You (The Public Theater, Bessie Award). He wrote the book, lyrics, co-composed the music for, and
starred in the musical
Floyd and Clea Under the Western Sky (Playwrights Horizons, Goodman Theater, Outer Critics Circle Nomination). His
new solo work Harry Clarke starring Billy Crudup premieres this fall at the Vineyard Theatre.

With the collaboration of Aziz Nadif

Currently in its exploratory phase, this new work excavates the connections between contemporary art and contemporary Arabic
identity, as well as the links between ‘art’ and the ‘art market’ in the context of crisis. In an era where the crisis
in the Arab identity, and public perception of what is it to be “Arab”, is oftentimes misconstrued and misinterpreted by
the art Arabs create — or are expected to create. This project utilizes text, singing, movement and visual art through
the lens of political events, past and present, beginning with the Arab Andalusian history in Spain in the middle ages
to the terrorist attacks of 9/11, the Arab Spring and onward to a fictional future.

Youness Atbane is an artist who works in a variety of media. After a range of studies across graphic art and design,
performance and visual art in France, Morocco, Belgium and Spain, he is a graduate of “EX E.R.CE08,” an M.A. program in
Montpellier’s Centre Chorégraphique National and the Master in Arts and Museology program of the Université of Nice Sofia
Antipolis. His installations and performances have been at museums worldwide, including Madrid’s Casa Encendidia, Rome’s
Museum of Contemporary Art, Paris’ Institut du Monde Arabe, London’s Victoria and Albert Museum, Rabat’s Museum of Contemporary
Art Mohammed VI and San Francisco’s Headland Center for the Arts.

Aziz Nadif is a Moroccan singer and dancer. A graduate of Casablanca’s Conservatoire, he joined the world of contemporary
dance through collaboration with choreographer Khalid Benghrib. Later on, he worked with international choreographers such
as Loren Palmer, Younes Atbane, and Roshaus Aust. Aziz’s work focuses on crossing voice and movement, something that he
continued to develop when he joined the company 2KFAR, and through his regular participation in international artistic
projects.

The Sundance Institute Theatre Program is supported by an endowment from the Doris Duke Charitable Foundation, with generous
additional support from The Andrew W. Mellon Foundation; Time Warner Foundation;

Founded in 1981 by Robert Redford, Sundance Institute is a nonprofit organization that provides and preserves the space
for artists in film, theatre, and new media to create and thrive. The Institute’s signature Labs, granting, and mentorship
programs, dedicated to developing new work, take place throughout the year in the U.S. and internationally. The Sundance
Film Festival and other public programs connect audiences to artists in igniting new ideas, discovering original voices,
and building a community dedicated to independent storytelling. Sundance Institute has supported such projects as
Boyhood, Swiss Army Man, Manchester By the Sea, Brooklyn, Little Miss Sunshine, Life, Animated, Sonita, 20 Feet From Stardom,
Beasts of the Southern Wild, Fruitvale Station, Sin Nombre, Spring Awakening,A Gentleman’s Guide to Love and Murder and
Fun Home
. Join
Sundance Institute on
Facebook,
Instagram,
Twitter and
YouTube.