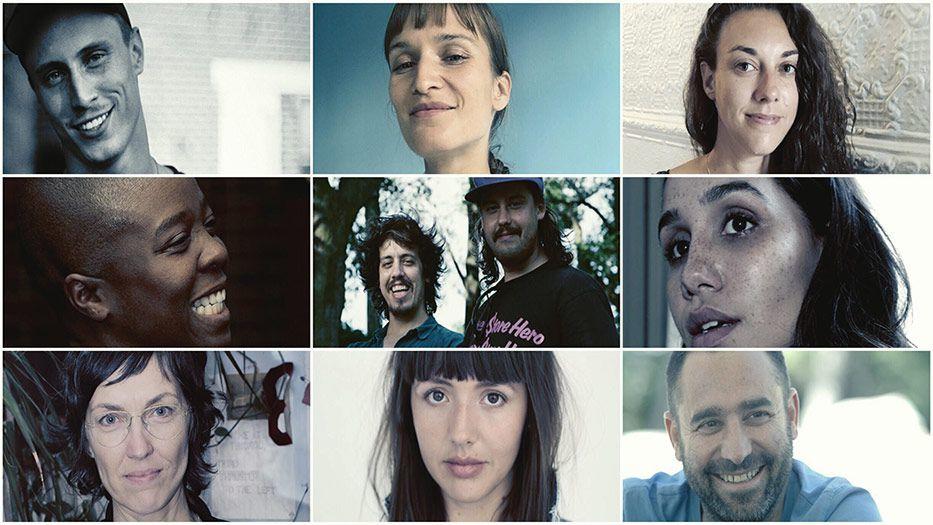 “This year’s Art of Nonfiction cohort, expanded to include writing fellows, signals our commitment to supporting artists in getting inventive nonfiction work made, seen and situated within the culture.” said Tabitha Jackson, Director of Sundance Institute’s Documentary Film Program. “At a time when the independent voice has never been more necessary, learning from artists about how we can better support and sustain their creative process so that they can describe the world truthfully and powerfully is not a luxury but a necessity.”

The Art of Nonfiction Fellowship, encouraging the creative process of boundary-pushing nonfiction filmmakers, includes an unrestricted direct-to-artist grant and a yearlong fellowship track tailored to each Fellow’s creative aspirations and challenges. The Art of Nonfiction Fund, supporting pioneering artists at the forefront of creative nonfiction filmmaking, provides grants annually to filmmakers developing a project that takes on an inventive cinematic approach and pushes the boundaries of the form.

New this year, the Nonfiction Critics Fellowship was developed to address a dearth of nuanced and in-depth critical writing about nonfiction films. Each fellow receives financial support as well as participation in process-oriented conferences and workshops, including the Sundance Institute’s Documentary Edit and Story Labs. During the course of the year, fellows are encouraged to explore new modes of nonfiction criticism. The Fellowship is developed in partnership with the Jonathan B. Murray Center for Documentary Journalism at the University of Missouri, and artistic advisor Eric Hynes.

The 2017 Art of Nonfiction Fellows are:

Garrett Bradley is an American-born artist and filmmaker. An alumna of Smith College, UCLA and The Skowhegan School of Painting and Sculpture, she is a 2014 Gotham Award nominee and recipient of the 2017 Sundance Film Festival Jury Award for Nonfiction Filmmaking. She has also received the Artadia Prospect 3 Award and is a grantee of the Art Matters Foundation, the Ford Foundation and the Warhol Foundation for her upcoming project due to release in 2018 entitled American Rhapsody. Bradley’s work has screened at festivals and institutions around the world including The Rotterdam International Film Festival, DokuFest, The Tribeca Film Festival, The International Arts Biennial, Prospect 3, Rooftop Film Festival, SXSW, The Hammer Museum and the US Embassy in Tel Aviv. Her most recent short film, Alone was released by The New York Times Op-Docs. Bradley lives and works in New Orleans, Louisiana where she currently serves as Adjunct Faculty at Loyola University.

Sierra Pettengill is a Brooklyn-based filmmaker. Her most recent film, The Reagan Show, an all-archival documentary which she co-directed with Pacho Velez, played at the Tribeca Film Festival and the Locarno Film Festival in 2017. She produced the Academy Award-nominated documentary Cutie and the Boxer, which also won a News & Doc Emmy Award for Best Documentary. Town Hall, her feature-length documentary, co-directed with Jamila Wignot, broadcast nationally on PBS in 2014. She was the associate producer of several Emmy-nominated historical documentaries for HBO and PBS, and the archivist on Jim Jarmusch’s Gimme Danger (Cannes 2016), Mike Mills’ 20th Century Women (NYFF 2016), Robert Greene’s Kate Plays Christine (Sundance 2016), and Matt Wolf’s Teenage (Tribeca Film Festival 2013), amongst many others. Her writing on film has appeared in frieze magazine, IDA Magazine, and The Talkhouse. Sierra’s next project, Riotsville, USA, is currently in development.

Iva Radivojevic is a Brooklyn-based filmmaker who spent her early years in Yugoslavia and Cyprus. Her films have screened at NYFF, SXSW, Rotterdam IFF, HotDocs, MOMA (NYC), PBS, and via The New York Times Op-Docs. She is the recipient of the Guggenheim Fellowship, 2011, 2012, 2017 Princess Grace Special Project Award and Film Fellowship and was named one of 25 New Faces of Independent Film by Filmmaker Magazine. Her debut film Evaporating Borders received numerous awards worldwide. Her work Notes From The Border was commissioned for the launch of Field of Vision, founded by Laura Poitras, AJ Schnack and Charlotte Cook. When not working on her own films, Iva cuts both documentary and narrative films, including Celia Rowlson-Hall’s MA, Keith Miller’s Five Star, Martin DiCicco’s All That Passes By Through A Window That Doesn’t Open. She’s currently working on her new film Aleph, inspired by Jorge Luis Borges.

The 2017 Art of Nonfiction Grantees and their supported projects are:

Ra’anan Alexandrowicz, Regarding Ourselves and the ‎Pain of Others
Ra’anan Alexandrowicz is the writer and director of award-winning films such as The Law in These Parts (Sundance 2012 Grand Jury Award International Documentary, Peabody Award 2013), the fiction feature James’ Journey to Jerusalem (Cannes 2003 – Director’s Fortnight, Toronto Film Festival 2003), the documentary The Inner Tour (New Directors New Films 2001, Sundance Film Festival 2002), and the documentary Martin (Berlin Film Festival 2000 – Forum for Young Cinema, Purchased for the MoMA permanent film collection). Ra’anan’s critically-acclaimed works have been theatrically-released to international audiences and broadcast worldwide. As an editing advisor Ra’anan served as a consultant on groundbreaking films including Risk (2017), Newtown (2016), A Flickering Truth (2015) Citizenfour (2014), and Trouble the Water (2008).

Regarding Ourselves and the ‎Pain of Others explores contemporary media viewers’ consciousness and the questions the effect depiction of the pain of distant others in audio-visual media.

Yance Ford, Untitled
Director Yance Ford is a Sundance Institute Fellow, a Creative Capital Grantee and featured in Filmmaker Magazine’s 25 New Faces of Independent Film. A graduate of Hamilton College and the Production Workshop at Third World Newsreel, he is a former series producer of the PBS anthology series POV. Ford’s feature documentary Strong Island has played over 15 film festivals worldwide. The Root 100 recently named Ford among the most influential African Americans of 2017. In December the International Documentary Association will present him with their Emerging Filmmaker Award. The Guardian said of his directorial debut “There’s something different about Strong Island, however, a film characterized by raw emotion and calm anger, which must surely be considered one of the finest documentaries of 2017…” Strong Island launched globally on Netflix September 15th.

Project information omitted by request of the artist.

Betzabé Garcia, #Mickey
Betzabé Garcia is the producer and director of the feature documentary Kings of Nowhere (2015), winner of the SX:Global Audience Award at SXSW, the Grand Jury Award at Full Frame Documentary Festival, the Golden Eye for Best International Documentary Film at the Zurich Film Festival, Best Documentary at the Morelia International Film Festival and a number of other awards. The film also screened at Sheffield Doc/Fest, MoMA’s Doc Fortnight, Frames of Representation at ICA, the Warsaw Film Festival and a number. It was nominated for Outstanding Achievement in a Debut Feature Film at the 2016 Cinema Eye Honors, Best Documentary at the Mexican Ariel Awards and won the Golden Eye at Zurich Film Festival. Betzabé also won Best Director of a Documentary Film at the 2016 Cinema Tropical Awards in NYC. Kings of Nowhere is distributed by FilmBuff and was bought by SundanceTV. Betzabé also directed the The New York Times Op-Docs short Unsilenced (2016).

#Mickey – Born in a land of drug cartels and carnival queens, Mickey found in social media a platform where she can explore her gender fluid sexual identity and deal with the deep homophobia of her environment. She has become a well-known Youtube personality, but now she is fighting a new identity crisis: a conflict between her online persona and her real self.

Adam and Zack Khalil, Untitled Norval Morrisseau Project
Adam Khalil and Zack Khalil (Ojibway) are filmmakers and artists from Sault Ste. Marie, Michigan and currently based in Brooklyn, New York. Their work centers indigenous narratives in the present — and looks towards the future — while subverting traditional forms of ethnography through humor, transgression, and innovative documentary practice. Their films and installations have been exhibited at the Museum of Modern Art, e-flux, UnionDocs, Maysles Cinema, Microscope Gallery (New York), Walker Arts Center (Minneapolis), Spektrum (Berlin), Trailer Gallery (Sweden), and Carnival of eCreativity (Bombay). They both graduated from the Film and Electronic Arts program at Bard College, and are UnionDocs Collaborative Fellows, Gates Millennium Scholars, and current Sundance Native Film Fellows.

Untitled Norval Morrisseau Project is an unflinching cinematic portrait of Norval Morrisseau, the infamous and lauded forefather of contemporary indigenous art. His tumultuous life, defined by perpetual transformation, is presented through seven vignettes, each representing one of the seven stages of life in the Anishinaabe worldview.

Deborah Stratman, Hello Ladies
Artist and filmmaker Deborah Stratman is interested in landscapes and systems. Much of her work points to the relationships between physical environments and human struggles for power and control that play out on the land. Recent projects have addressed freedom, expansionism, surveillance, public speech, sinkholes, levitation, orthoptera, raptors, infrastructure, levitation, comets and faith. She has exhibited internationally at venues including MoMA NY, Centre Pompidou, Hammer Museum, Mercer Union, Witte de With, the Whitney Biennial and festivals including Sundance, Viennale, Berlinale, CPH/DOX, Oberhausen, Ann Arbor, Full Frame and Rotterdam. Stratman is the recipient of Fulbright, Guggenheim and USA Collins Fellowships, an Alpert Award, and grants from Creative Capital, Graham Foundation and Wexner Center for the Arts. She lives in Chicago where she teaches at the University of Illinois.

Hello Ladies is a hybrid doc that looks to women’s language, gesture, rhythm and the public voice as modes of resistance. Science-nonfiction set in Ethiopia’s Afar Depression and the U.S. capitol, in celebration of alternative voices and radical women asking who speaks? Who gestures? Who makes? Who gets heard?

Logan Hill is a veteran arts reporter and critic who spent more than a decade as a staff writer and editor at New York Magazine and Vulture, then a year at GQ. Now he contributes regularly to The New York Times, Cosmopolitan, Esquire, Rolling Stone, and Wired—and less regularly to outlets including “This American Life,” Billboard, Elle, and Men’s Journal. He also hosts TimesTalks and the new NYT screening series ScreenTimes. You can find links to his stories at loganhill.com.

Nick Pinkerton has been writing about film and other moving image-based art since the early aughts, when he rose to power through the online journal Reverse Shot. He converted several years as a contributor at the Village Voice into a semi-booming freelance practice which includes regular contributions to Film Comment, Sight & Sound, Artforum, Frieze, and sundry other publications which he deems worthy to receive his prose.

Alissa Wilkinson is the staff film critic at Vox.com, which she joined in September 2016 after a decade of writing about film, books, television, and visual art at publications including Rolling Stone, Vulture, RogerEbert.com, Pacific Standard, Christianity Today, Books & Culture, The Washington Post, The Atlantic, The Los Angeles Review of Books, Thrillist, Flavorwire, Paste, and more. She is an associate professor of English and humanities at The King’s College in New York City, where she teaches criticism and cultural theory, and is a member of the New York Film Critics Circle.

Sundance Institute
Founded in 1981 by Robert Redford, Sundance Institute is a nonprofit organization that provides and preserves the space for artists in film, theatre, and new media to create and thrive. The Institute’s signature Labs, granting, and mentorship programs, dedicated to developing new work, take place throughout the year in the U.S. and internationally. The Sundance Film Festival and other public programs connect audiences to artists in igniting new ideas, discovering original voices, and building a community dedicated to independent storytelling. Sundance Institute has supported such projects as Boyhood, Swiss Army Man, Manchester By the Sea, Brooklyn, Little Miss Sunshine, Life, Animated, Sonita, 20 Feet From Stardom, Beasts of the Southern Wild, Fruitvale Station, Sin Nombre, Spring Awakening, A Gentleman’s Guide to Love and Murder and Fun Home. Join Sundance Institute on Facebook, Instagram, Twitter and YouTube.