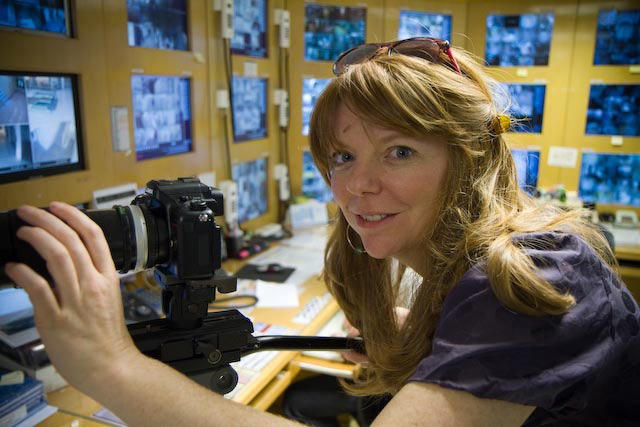 Los Angeles, CA — The second Sundance Institute | TED Prize Filmmaker Award, including a $125,000 grant, has been awarded to Havana Marking for her short documentary Bloody Money about corruption in the Ukrainian government — featuring the work of TED Prize winner Charmian Gooch of Global Witness whose TED Wish was to end anonymous shell companies.

Bloody Money, currently in production, is a financial thriller that follows an extraordinary story from Kiev to London to Washington, D.C. It reveals uncomfortable truths about the global financial systems currently in place that actively enable and encourage corruption. The film links to the work of Global Witness, the organization co-founded by Gooch, to expose how anonymous shell companies and Western banks are used to enable corrupt governments to rob their nation’s wealth. Global Witness is a non-profit organization that, for 20 years, has run pioneering investigations and campaigns uncovering the links between natural resources, corruption and conflict. Gooch received the $1 million TED Prize in 2014, and Marking’s intention is to illuminate the extent and malign effects of anonymous companies.

VICE News, having a track record of reporting on the crisis in Ukraine, has signed on as Executive Producer and will premiere the film exclusively on their platform. VICE News’ ongoing Russian Roulette series has produced over 100 video dispatches from the region to date with over 50 million video views, garnering numerous journalism awards for their coverage.

Tabitha Jackson, Director of Sundance Institute’s Documentary Film Program, said, “Our collaboration with TED uses the power of documentary filmmaking to shed light on some of the most effective change-makers working today. We’re particularly thrilled that VICE News has signed on to support this powerful and provocative story and provide Havana’s film a platform to reach new audiences.”

Anna Verghese, Director of the TED Prize, said, “TED is about ideas worth spreading, and Sundance Institute helps us take and further explore the multidimensional work of TED Prize winners. With this collaboration, we are able to support a filmmaker in sharing the complex and critical work Global Witness is doing to end corruption. Marking has found a brilliant lens through which to tell the story, and a perfect partner in VICE News to make sure this story is heard.”

Havana Marking, Prize Recipient and Director of Bloody Money, said, “Financial corruption is one of the greatest problems of our age, with real effects and human victims. How to communicate this complicated problem has always been a huge challenge. I hope with this story we have found a compelling and exciting way through, and I am hugely excited to be part of this team.”

Submissions from around the world were reviewed by Sundance Institute and TED staff, in conjunction with advisory committee members.

The first-ever Sundance Institute | TED Prize Filmmaker Award went to Jerry Rothwell in 2013 for his film, Like Whirlwinds, about TED Prize winner Sugata Mitra and his project, School In The Cloud.

TED Prize
The first TED Prize was awarded in 2005, born out of the TED Conference and a vision by the world’s leading entrepreneurs, innovators, and entertainers to change the world – one wish at a time. The original prize: $100,000 and the TED community’s range of talent and expertise. What began as an unparalleled experiment to leverage the resources of the TED community has evolved into a $1 million award and an ambitious effort to spur global-scale change.

From Bono’s the ONE Campaign (’05 recipient) to Jamie Oliver’s Food Revolution (’10 recipient) to JR’s Inside Out Project (’11 recipient) and Sugata Mitra’s School in a Cloud (’13 recipient), the TED Prize has helped to combat poverty, take on religious intolerance, improve global health, tackle child obesity, advance education, and inspire art around the world. ted.com/prize