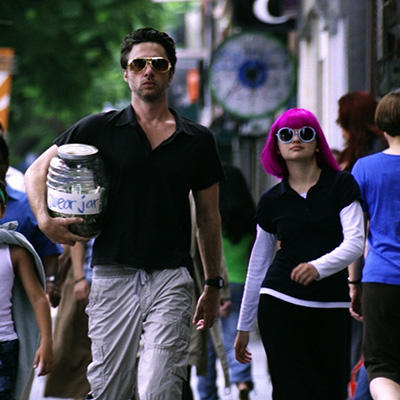 Park City, UT — Sundance Institute today announced the addition of two films to the 2014 Sundance Film Festival: Wish I Was Here (Director: Zach Braff) to the Premieres section and Clerks (Director: Kevin Smith) for a special From the Collection midnight screening. The 2014 Festival will be January 16-26 in Park City, Salt Lake City, Ogden and Sundance, Utah.

Clerks joins the previously announced From the Collection screening of Hoop Dreams. Both films premiered at the 1994 Festival, which will be the subject of “Class of ’94,” a Power of Story panel at the Egyptian Theatre on Friday, January 24. Clerks director Kevin Smith will participate.

Both Hoop Dreams and Clerks are part of The Sundance Collection at UCLA, a film preservation program established in 1997. The Collection is specifically devoted to the preservation of independent documentaries, narratives and short films supported by Sundance Institute and has grown to nearly 2,300 holdings representing 1,800 titles, including recent additions such as El Mariachi, Winter’s Bone, Paris is Burning, Johnny Suede, Working Girls, Crumb, Groove, Better This World, The Oath and Paris, Texas. Titles are generously donated by individual filmmakers, distributors and studios.

With the addition of Wish I Was Here, the 2014 Festival will present 119 feature-length films, representing 37 countries and 54 first-time filmmakers, including 34 in competition. These films were selected from 12,218 submissions (72 more than for 2013), including 4,057 feature-length films and 8,161 short films. Of the feature film submissions, 2,014 were from the U.S. and 2,043 were international. 98 feature films at the Festival will be world premieres.

Wish I Was Here / U.S.A. (Director: Zach Braff, Screenwriters: Zach Braff, Adam Braff) — Aidan Bloom, a 35-year-old struggling actor, father, and husband, is still trying to find purpose in his life. In coming to terms with the death of his father, Aidan and his family unite to discover how to turn the page onto the next chapter. Cast: Zach Braff, Kate Hudson, Mandy Patinkin, Josh Gad, Ashley Greene, Joey King. World Premiere

Clerks premiered at the 1994 Sundance Film Festival. A newly struck print of Clerks, created by Miramax to commemorate the film’s 20th anniversary, will screen on Friday, January 24 at 11:59 p.m. at the Egyptian Theatre in Park City. Director Kevin Smith is expected to introduce the film and participate in the Q&A.