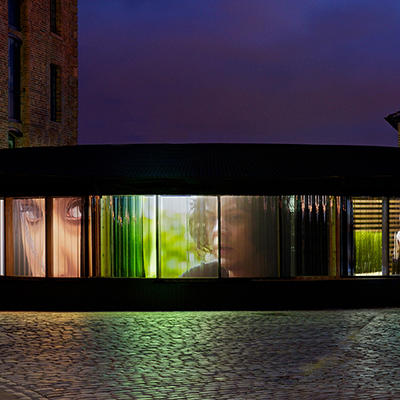 Park City, UT — Sundance Institute announced today the films and installations to be featured in the 2014 edition of New Frontier at the Sundance Film Festival, including the U.S. premiere of The Source (evolving) by renowned artist Doug Aitken and a 3D projection-mapping project by Klip Collective. The Festival takes place January 16-26 in Park City, Salt Lake City, Ogden and Sundance, Utah.

New Frontier champions films that expand, experiment with, and explode traditional storytelling. Recognizing the crossroads of film, art, and media technology as a hotbed for cinematic innovation, New Frontier is also a venue showcasing media installations, multimedia performances, transmedia experiences, and panel discussions that explore the expansion of cinema culture in today’s rapidly changing media landscape. Most of the installations will be housed at a new, 5,000-square-foot location at the Gateway in Park City, which is adjacent to Main Street; Doug Aitken’s The Source (evolving) and the Klip Collective exterior projections on the Egyptian Theatre will be in nearby locations along the Main Street corridor. Admission to all New Frontier installations is free.

“This year’s expanded ‘New Frontier’ allows artists to continue pushing the boundaries in telling their stories,” said Robert Redford, President & Founder of Sundance Institute. “In addition, this expanded work helps us mark the 30th anniversary of the Sundance Film Festival,” he added.

Shari Frilot, Sundance Film Festival Senior Programmer and curator of the exhibition, said, “As human and machine, biological and media experiences blur and hybridize, the distinctions between them are also becoming irrelevant. The digital and the organic integrally constitute a new primordial pool. What does creativity and storytelling look like if we revel in this new way of being?”

The 2014 edition of New Frontier at the Sundance Film Festival will host the U.S. premiere of The Source (evolving) by renowned artist Doug Aitken.The Source (evolving) is a series of filmed conversations about creativity in the 21st Century in which Aitken conducts short candid conversations with groundbreaking pioneers in different artistic disciplines. The piece creates a fast and rhythmic kaleidoscope of dialogues with the creative individuals who are shaping modern culture. The conversations are grounded by two questions: where does the creative idea start, and what is the journey to the finished creation? The Source (evolving) is filmed on location in unique and diverse destinations throughout the world and premiered at the Tate Liverpool last year.

The Source (evolving) will be housed in the Pavilion, a new 2,000-square-feet, stand-alone, circular structure to be custom-built by the Festival in a location adjacent to Park City’s Main Street. The architecture was created in collaboration with David Adjaye. Six-channel video projections of The Source (evolving) span the entire width of the structure’s interior and are also visible from the outside, wrapping the structure’s exterior.

Aitken said, “The Source (evolving) examines the entire process of creation, not just the finished result, and speaking directly with the creators whose work has the ability to steer culture in a significant way, The Source (evolving) takes viewers on a fast-moving road trip through the modern landscape of creativity.” The Sundance Film Festival, with its legacy of discovering inspired independent artists and attracting audiences curious about the creative process, is the perfect platform to host the U.S. premiere of The Source (evolving).

Aitken’s work was last featured at the Sundance Film Festival in the 2008 edition of New Frontier, where he presented a special single-channel version of Sleepwalkers, his groundbreaking MoMA installation that transformed an entire block of Manhattan into an expansive cinematic experience as he covered the museum’s exteriors walls with projections.

The U.S. premiere of The Source (evolving) at the Festival is made possible by a generous contribution from The Maurice Marciano Family Foundation.

The 2014 Festival will include a showcase of the Festival’s 30-year legacy as told through a pre-roll trailer showing 3D-mapped projections of clips from iconic Festival films on the façade of Park City’s legendary Egyptian Theatre. Featured film clips include Reservoir Dogs, Clerks, Little Miss Sunshine and Beasts of the Southern Wild. The innovative projections were designed by Klip Collective, a creative and production shop specializing in immersive visual experiences.

For their third year as a participant at the Festival, Klip Collective will premiere its newest 3D video-mapped narrative, “What’s He Projecting In There,” an indie style salute to the history of cinema on the exterior of the Egyptian Theatre as part of the Festival’s New Frontier exhibition.

Clouds
Artists: James George, Jonathan Minard
Assembled from code and stunning 3D-scanned conversations, Clouds is a cutting-edge interactive documentary that features the emerging generation of artists and hackers who are creating tools for poetic and socially engaged experiments in technology.

Digital Diaspora Family Reunion
Artist: Thomas Allen Harris
The transmedia companion to the feature documentary, Through A Lens Darkly, Digital Diaspora Family Reunion (DDFR) re-imagines the social network the building of ONE WORLD-ONE FAMILY ALBUM, a database of family photographs. Audiences are invited to upload images to Instagram at #DDFRtv, or bring them to New Frontier to participate in a special LIVE event.

EVE: Valkyrie
Artists: CCP Games
In one of the most anticipated video-game releases of 2014, award-winning Icelandic independent-game developer CCP Games presents EVE: Valkyrie—a virtual-reality experience like no other. In this special preview, audiences can put on an Oculus Rift headset, take a seat inside the cockpit of a spaceship, and enter a 360-degree-surround dogfight against enemy invaders.

I Want You To Want Me
Artists: Jonathan Harris, Sep Kamvar
An alluring work of data visualization, this interactive installation explores the world of online dating. A giant touch screen displays a sky filled with balloons containing silhouettes, each one representing a real person’s dating profile. Viewers can touch the balloons to learn personal information about the person inside and rearrange them to view things like top turn-ons, most popular first dates, and people’s biggest desires.

The Measure of All Things
Artists: Sam Green, yMusic
The Measure of All Things is a live documentary featuring a series of portraits of record-holding people, places, and things. Inspired loosely by the Guinness Book of Records, Academy Award-nominated filmmaker Sam Green and yMusic create a poem about fate, time, and the contours of the human experience.

Mesocosm
Artist: Marina Zurkow
Mesocosm (Wink, Texas) and Mesocosm (Northumberland, UK) are two parts of a series of animated landscapes that change over time in response to software-driven data inputs. Individual hand-drawn animated elements are dynamically choreographed according to algorithms that dictate constraints in real time: one day takes 24 minutes to elapse; a year takes 144 hours.

My 52 Tuesdays
Artists: Sophie Hyde, Sam Haren, Dan Koerner
Picture an interactive photo booth where you get more than just your printed picture. It’s a year-long, participatory project accessed via smartphones with a series of questions designed to ‘’tune in” to your life. Like its companion film, 52 Tuesdays, this work explores themes of desire, responsibility, and transformation. How much are you willing to share? Cast: Tilda Cobham-Hervey.

Not Eye
Artist: Lauren Moffatt
Not Eye is an immersive, 3D stereoscopic experience that invites you to meet a woman who can no longer take the constant violation of being looked at and spied on every day of her life by the devices that populate the modern landscape. She is so tormented that she decides to take action, creating a helmet designed not only to defend herself but also to strike back. Cast: Danièle Hennebelle, Julien Bucci.

Sound + Vision
Artists: Chris Milk, Beck
When Beck reimagined David Bowie’s 1977 single “Sound and Vision,” Chris Milk set out to recreate its experience—literally its sound and vision—for both the live concert and its recording. He captured the performance using newly patented technologies like full spherical video and 360-degree binaural audio. This is the first live-action VR film designed for the Oculus Rift. Cast: Beck.

This World Made Itself; Myth and Infrastructure; Dreaming of Lucid Living
Artist: Miwa Matreyek
In a body of work that spans six years, Miwa Matreyek will present three of her multimedia solo live performance pieces featuring projected animation and her body, traversing ocean scapes, cityscapes, and dreamscapes. Cast: Miwa Matreyek

The Better Angels / U.S.A. (Director and screenwriter: A.J. Edwards) — Set in the harsh wilderness of Indiana, this is the story of Abraham Lincoln’s youth. It tells of the hardships that shaped him, the tragedy that marked him forever, and the two women who guided him to immortality. Cast: Jason Clarke, Diane Kruger, Brit Marling, Wes Bentley. World Premiere

Living Stars / Argentina (Directors: Mariano Cohn, Gastón Duprat) — Argentinians open their homes to the public and perform dance numbers they normally only do alone, in front of a mirror. The directors portray them in their houses, with improvised sets, revealing a collection of urban curiosities. World Premiere

Through a Lens Darkly: Black Photographers and the Emergence of a People / U.S.A. (Director: Thomas Allen Harris, Screenwriters: Thomas Allen Harris, Don Perry, Paul Carter Harrison) — Through a Lens Darkly is an epic film that moves poetically between the present and the past through the work of contemporary photographers and artists. Their pictures and stories seek to reconcile legacies of pride and shame while giving a voice to images long suppressed, forgotten, or hidden from sight. World Premiere

Image of The Source at the Tate Liverpool is courtesy of 303 Gallery, New York and Victoria Miro Gallery, London