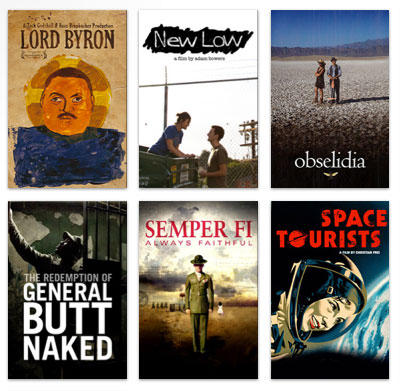 Los Angeles, CA (January 18, 2012) – Sundance Institute announced thirteen films supported by the Institute that are for the first time available to rent, download and stream. Look for the films on iTunes, Amazon Instant Video, Hulu, SundanceNOW and YouTube. Films will be available on Netflix on March 1. For a full list of titles and where they are available, visit sundance.org/nowplaying or join Sundance Institute’s social media communities on Facebook, Twitter, Instagram, Google+ and Kickstarter.

These projects are the first to take advantage of the Institute’s Artist Services access to distribution program, announced this summer. Artist Services provides Institute artists with exclusive opportunities for creative self-distribution, marketing and financing solutions for their work.

“We are truly excited for these films to reach the leading digital platforms and storefronts for movies. We created Artist Services so films that have shown at the Sundance Film Festival or been part of our Sundance Institute Labs will have a chance to find their audiences and fan bases. Audiences now have a chance to connect with exciting independent work using the devices and services they already love,” said Keri Putnam, Executive Director of Sundance Institute.

New Video® is the exclusive aggregation partner for distribution across all portals participating in the Artist Services program. The Artist Services initiative is made possible by The Bertha Foundation. O’Melveny & Myers generously provided pro bono legal services for the program.

The films and their availability are:

The Redemption of General Butt Naked (Directors: Eric Strauss and Daniele Anastasio) – A brutal warlord who murdered thousands during Liberia’s horrific 14-year civil war renounces his violent past and reinvents himself as an Evangelist, facing those he once terrorized. iTunes, Amazon Instant Video. (2011 Sundance Film Festival Winner, Excellence in Cinematography Award)