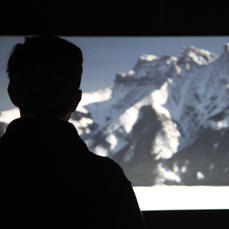 For the diverse group of international artists whose work is highlighted at the 2010 edition of New Frontier at Sundance Film Festival, film isn’t a means for escape, but rather a call for immersive engagement. If art is a reflection, or refracted version of reality, this collection of films, video presentations and site-specific installations project reality right back into the physical world in playful and fascinating ways.

New Frontier on Main opened its doors to the public on Thursday, and the artists were on hand to introduce and discuss their works. Shari Frilot, Sundance Film Festival Senior Programmer and New Frontier’s chief curator, emphasized that regardless of an artist’s background or chosen format, all of the featured works speak the same language – the language of cinema. She also described how New Frontier offers a fundamentally unique viewing environment. “Instead of sitting in front of screens,” she said, “We’re surrounded by them.”

A multi-media world unto itself, Tracey Snelling’s expansive installation, Bordertown, is a work of both imagination and exacting construction, embedding video within the windows of a miniature Mexican town. Snelling has created detailed dollhouse versions of convenient stores, strip clubs and seedy motels that she populates with mini-LCD screens playing movie clips both exotic and familiar (Buffalo 66, Superbad). “It’s based on perception rather than a particular reality,” she said, but as presented takes on a mysterious life of its own.

Another work that breathes life into ordinary space is Ragnar Kjartansson’s The End, which surrounds the viewer with five monitors to summon a living sculpture of video and sound. A deceptively complex, surprisingly layered take on creation, The End shows Kjartansson and fellow Icelander Davio Por Jonsson perform parts of a single musical composition from five different locations in the Canadian Rockies, from an acoustic duet in the brambled woods to a grand piano dwarfed by a majestic mountain. Funny, beautiful, and surprisingly intimate, the piece is somehow both transporting and undeniably present. Meanwhile, Pipilotti Rist’s Lobe of Living covers the walls in lush, gooey, abstractly erotic video imagery. Bright red daybeds are scattered throughout the room, inviting the viewer to relax and stay awhile. “It’s a place where you can get milder,” she said. “Where you can accept that you’re an animal.”

Several works in New Frontier engage with internet culture, and each in its own way aims to restore virtual realms back to the real one. For Earthwalk German designers Jens Franke and Thomas Gläser adapt Google Earth into a toe-tapping experience, connecting foot sensors to a computer that carpets the floor with a fully zoomable map. Eric Gradman’s Cloud Mirror uses wall-mounted monitors to confront viewers with reflected, pixilated images of themselves that are then transformed and invaded by information – personal photos, Facebook updates, Tweets – gleaned from the web. “Our internet identities are diverging from physical reality,” he said, a notion one can find either intriguing or disturbing, and both are reflected in Cloud Mirror. And finally, Sundance Film Festival mainstay and indie heartthrob Joseph Gordon-Levitt (Hesher, (500) Days of Summer) introduces hitRECord.org, a collaborative production company that combines social media, crowd sourcing, and remix culture to encourage organically produced works of music and video.

An industry veteran at just 28, Gordon-Levitt is poised between traditional, mass entertainment and emerging, experimental methods of artistry. Rather than fighting the brave new world of digital culture, he spoke of the great potential of one-of-a-kind presentations like New Frontier on Main. “To make sustainable art, one of the things we should be focusing on is site-specific art,” he said. While the internet encourages infinite replication, works like Bordertown and Lobe of Living can only be experienced in this unique and provocative environment. “What we can use to support ourselves is to say, ‘Come to this place.’”