New Frontier at the 2014 Sundance Film Festival: “The Primordial Pool” 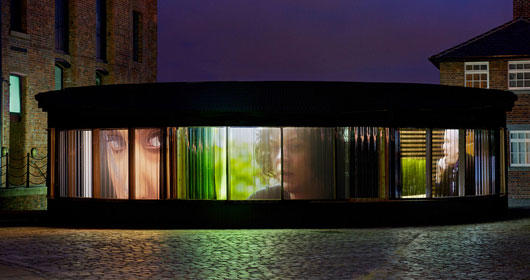 Over the years, New Frontier at Sundance, the Festival’s annual showcase for vanguard works of new, immersive and interactive media, has demonstrated not only how the line between our own bodies and the technologies we employ has blurred, but also how the latter, via multiplying screens and cell phones and transmedia, continues to redefine how we think of the former. But a funny thing happened on the way to this year’s “Primordial Pool”: Humanity reasserted itself.

The showpiece of this year’s survey, Doug Aitken’s freestanding multi-screen pavilion The Source (Evolving), emphasizes old-fashioned conversations over a technological or narrative avant garde. The six-channel projection piece is comprised of interviews Aitken conducted with artists across disciplines, from Jack White and James Murphy to Tilda Swinton and William Eggleston.

“Oftentimes at the end of the year, when you look back you say ‘What was of value?’ It’s nothing material but it might be something someone said to you in conversation, an idea,” Aitken said during the New Frontier press preview on Friday morning. In each of the 23 clips, in which lengthier interviews have been edited down to a few minutes and cycle through the six channels, Aitken casually sits across from his subjects and encourages an open-ended discussion about the germination of creativity, or “the starting point for a creative act.”

In Reifying Desire Anthology, artist Jacolby Satterwhite augments a series of personal and erotically charged computer-generated videos with his own freestyled dance performance. Rather than a one-way channeling of ideas and subterranean desires into the video realm, Satterwhite in turn liberates those ideas and desires through physical movement, audacious costuming, and fourth-wall-dissolving flamboyance.

Even Clouds, an interactive documentary in which the user navigates a seemingly infinite web of computer code via motion sensors, arrives at a place of tangible connection via portals to interviews with leading programmers who muse on the need for technology to resonate on a human level.

An entire corner of New Frontier, which has returned to Main Street this year thanks to a perch at the Gateway Center, is dedicated to works made possible by Oculus Rift, a company that is at the leading edge of virtual reality technology. Of these, the knockout is Chris Milk’s Sound and Vision, in which Beck (who also appears in Aitken’s The Source) performs David Bowie’s classic song of the same title in the round, amid 360-degree image and sound capturing.

With a provided virtual reality headset, the user can toggle between three 360-degree cameras—two that circle the stage and one that’s installed beside Beck on stage. Unlike VR experiences that attempt to hide the technology that makes the experience possible, in Sound and Vision the cameras and recording devices are left visible, encouraging the user to assume a role not just of the spectator, but of the recorder of the experience as well.

Meanwhile in Oculus Cinema, the user is transported to none other than a movie theater, where a “projected” movie can be watched from a cushiony multiplex seat among an audience of virtual moviegoers. Even as viewership drifts away from communal physical spaces to tablets and phones and home theaters, Oculus Cinema suggests that our craving for the theatrical experience, for physical closeness with fellow movie-lovers, will have to find new expression. In other words, though technology changes and we change along with it, some desires are fundamental, and aren’t going away any time soon.

Which may be why another seemingly simple work in the survey, James Nare’s Street is as enthralling as the works involving motion detection and virtual reality. Inspired by the Actuality Films of the turn of the 20th century, in which cameras documented cities via continuous shots from moving trolleys or subway cars, Nare uses high-speed cameras installed on a moving SUV to shoot street life in New York City in super slow motion, “to give this feeling of floating through an almost paralyzed city.”

But instead of having a flattening or clinical affect on the often imperceptively moving subjects, the approach actually heroicizes even the most mundane of actions—walking on the sidewalk, palming fruit at a stand, talking among friends. “The cumulative effect,” said Nare, is that “after I made this film I had a newfound love of humanity.” It’s an effect that many of the artists in this year’s survey seem to have experienced, as they search for ways to make technology work for us, to respond to our fundamental needs and desires.

As curator Shari Frilot said, “Instead of making judgments about whether technology is good or bad, maybe it’s more important to think about what is important to us as people, what are our values? What is beautiful and why is it beautiful?”