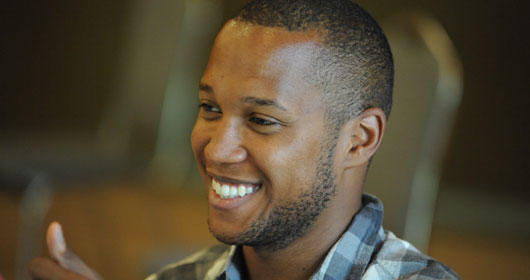 Branden Jacobs-Jenkins at the 2012 Theatre Lab at Sundance Resort.

“Tennessee Williams, ironically enough, is a very important person to me. He’s an artist I’m constantly returning to, who I’ve spent years being obsessed over. I’ve read everything he’s ever written.”

Brooklyn-based playwright and dramaturg Branden Jacobs-Jenkins makes no attempt to veil his self-described “fanboy” fixation with the work of Tennessee Williams. And just last month, when the Sundance Institute Theatre Program named him the first-ever recipient of the Tennessee Williams Award, Producing Artistic Director Philip Himberg bestowed the young playwright with a glowing comparison: “His audacity and poetic language are reminiscent of many of the qualities that define Mr. Williams’ writing.”

It’s clear that Jacobs-Jenkins is singularly enthralled by Williams’ oeuvre. He talks about the prolific writer with unabashed enthusiasm, almost as if to deflect the obvious reason that we’re speaking—to spotlight his own accomplishments. Jacobs-Jenkins is on the heels of premiering his latest play, Appropriate, a family drama that he discusses guardedly as to protect its winding, surprise-filled storyline. It was only a year ago that he was refining that project—and his process—at the Sundance Institute Theatre Lab. Now, he’s positioned himself as a burgeoning artist in his field, with a style subtly evocative of that writer he so gushes about.

When Jacobs-Jenkins is officially honored with the Tennessee Williams Award at the April 8th Theatre Program Benefit in New York—to be presented by Sally Field, and for which tickets are still available here—it will feel all too fitting. He took some time recently to share his longstanding passion for the arts, a significant personal and professional relationship with the Sundance Institute Theatre Program, and what it means to be receiving the first-ever Tennessee Williams Award.

Where do your roots with Sundance Institute and the Theatre Program begin?

I first went to the Sundance Playwrights Retreat at Ucross [Wyoming] in 2011, and then I did the Theatre Lab at the Sundance Resort in 2012, which was wonderful. In December, Philip Himberg called me up and told me I won this amazing award. Throughout this process, I always felt very connected to everyone at Sundance. Janice Paran, who is one of the dramaturgs, has become a sort of a mentor of mine, and a lot of my friends are Sundance-associated, so I’ve always felt part of the family in some way.

Your most recent play, Appropriate, premiered earlier this month at the Humana Festival and is still in theatres. Can you share some details about the play?

It’s a big family drama that I kind of wrote self-consciously in the vein of that genre. It’s about three siblings who descend on this family homestead in southern Arkansas to liquidate the estate of their father who has just died. There are a lot of surprise guests, and after going through their father’s stuff they start finding some things that kind of lead to other revelations.

It’s kind of hard to talk about without giving it away. People know what a family play is—people screaming at each other for two hours!

On both a personal and professional level, what is the significance of this award to you?

I feel very encouraged. I’ve had a strange couple of years, and it always matters when someone expresses a belief in you or encourages you in some way. And, Tennessee Williams, ironically enough, is a very important person to me. He’s an artist I’m constantly returning to, who I’ve spent years being obsessed over. I’ve read everything he’s ever written. I thought a lot about him during the writing of Appropriate. There’s something about how I can say that I have an award with his name in it that is really crazy to me.

What originally ignited your interest in theatre and playwrighting?

My journey is kind of roundabout. I always wanted to be a writer, but the idea of writing for theatre didn’t seem like a real thing when I graduated from school. I thought all playwrights were dead; I didn’t think people did that anymore.

I think what really attracts me to it is that it’s this really difficult challenge—it’s a confluence of a number of things. We’re not just providing a reading experience; we’re actually providing an experience. It’s this really true collaboration that feels essential to me. I grew up in a community where there was a lot of stress placed on youth involvement in the arts. I’ve always been on the periphery of the form in one way or another my whole life. My grandmother wrote plays for her church, so it’s weirdly in the family, but never in a way that it was conscious to anyone.

The Theatre Program is still, to some extent, not duly recognized beyond the arts world. Why do you think that’s the case?

It’s sort of funny that the Theatre Program doesn’t get as much attention nationally, because in the theatre world everybody knows what it is. It’s one of the purest forms of benevolence in the industry. So much important work has come through them already, and so many great artists are associated with Sundance. There’s something in the water.