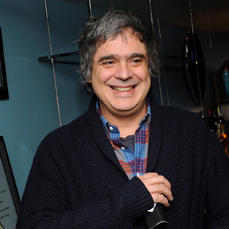 Miguel Arteta with his cast from Cedar Rapids. Photo by Dimitrios Kambouris.

Miguel Arteta’s first trip to the Sundance Film Festival was in 1997 with his celebrated debut feature, Star Maps, a film that not only put the filmmaker on the map but joined a handful of other low budget features to kick-start a new era of American independent filmmaking.

Arteta followed Star Maps with Chuck and Buck in 2000, an edgy character study starring Mike White and Chris Weitz. The film was another low-budget effort, and was shot on DV, and again, Arteta earned acclaim, this time for exploring the potential of digital video as a new tool for independent filmmakers, and for continuing to build his own highly personal filmmaking style.

The Good Girl and Youth in Revolt appeared over the ensuing few years, and now Arteta is back at the Festival this year with Cedar Rapids, a deft comedy featuring Ed Helms as a mild-mannered, small-town insurance salesman visiting a convention in the big city who discovers that the people he was taught to fear may have more in common with him than he was led to believe.

“To me, this is a movie about friendship,” Arteta told the audience after the film’s screening on Monday. “That’s what really attracted me to the script—there’s something so beautiful when you go on a trip and out of nowhere, you make a lifelong friend.” Below, Arteta reflects on the current state of independent filmmaking in the U.S.

You’ve been a key member of the American independent filmmaking community for nearly 15 years: what would you say are some of the biggest changes over that time?

Technically, the progress with high-def, and with HD cameras, is huge. The Red Camera redefines digital filmmaking, Final Cut lets you edit at home, and the prices on everything have gone down. So it’s very different from when I got started.

But if some things are easier, others are harder. All of the character-driven stories that were what independent filmmaking was all about have moved to TV, for example. I’m thinking of shows like Six Feet Under or Mad Men. The flavor of these stories, and even the casting—this is what indie filmmaking was in the ’90s. Then you could make a feature and it would be seen, but now that appetite is satisfied by cable, and people just aren’t going to arthouse theaters to see these kinds of movies. So it’s harder to make a character-driven movie.

The other thing I see, though, is that actors are still hungry for these roles, and you can entice talent a bit more easily. Ten years ago, if you had a big star in your film, it would throw your movie out of balance, but audiences are more accepting these days; you can cast known stars alongside unknown people, and it doesn’t matter.

Why do you think this is true?

Audiences are becoming more interested in story, and writing is becoming the star of independent movies more than it used to be. It used to be either the writing or the vision was the star, or you had stars in your story; these lines have been united. People don’t care if you have a big name, and some unknowns—audiences are more accepting.

Yes, Chuy Chávez, who has shot several of my films, was with me on Cedar Rapids, and Matthew Greenfield, the producer who worked with me on my first three films, is now at Searchlight, and I think the benefits of being able to go back and work with people you’ve worked with before are exponential.

I really lucked out, too. Searchlight is one of the best places to make and distribute a movie; the fact that I have a relationship with them, and that Matthew is there—I’m pretty lucky. We were able to talk the same language and bypass the politics that often go with working with a studio.

What would you say remains a challenge for you in particular?

With the new digital technology, and in the [digital intermediate], a lot can happen in that process with the colors. It’s terrifying! You could work with a colorist who you may not know, and he’s pressing buttons that will affect the look and texture of your entire film.

I think at some point in the future, colorists will be like cinematographers. Their input is almost bigger than that of the cinematographer. It’s enormous what they can do, and it’s all very mysterious right now. We’re at a moment of just figuring things out. So the technology is good and allows for a lot of changes that are good, but we’re still early on in its development.

Given that films now move across various media platforms, a lot of people are saying we need to reconsider how we teach filmmaking. Would you agree?

I work in different mediums. I’ve directed television, for example, but I’m always focused on story. There’s a lot of web content out there, and that area will be very interesting as it develops, but at the end of the day, storytelling is flirting with the audience. You have to convince them that you know what you’re doing. I think it doesn’t matter what the outlet is—this aspect is the most important.

If you want to be a writer or director, you need to think about storytelling. You need to be attentive to the things that appear on the periphery of your vision all day long, because that’s part of your point of view. You can study as long as you want, but we’re most excited when a unique vision appears on screen. The first minutes of Reservoir Dogs—we all knew instantly this guy was changing the rules about storytelling.

If you listen to your own thoughts, and you become attentive to your point of view, that’s the biggest capacity that you have. A lot of filmmakers are focused on other things, but I think being extremely present and self-aware is the best thing you can do. That’s what we want from artists. We want them to take us on unique journeys.