Meet the Artists: Women Without Men, A Crossover from the Art World 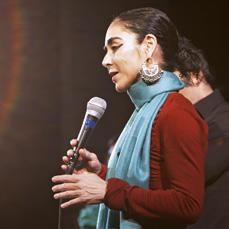 “To be very honest, I’ve had a growing love affair with cinema,” says New York-based Iranian filmmaker Shirin Neshat, who brings her first feature film project, Women Without Men (Zanan-e bedun-e mardan),to the Festival this year. “Part of it is the form and the power of storytelling and narrative,” she says, “but it’s also the relationship cinema has to its audiences. It’s very, very powerful.”

Neshat, an internationally-renowned visual artist known for her stunning moving image installations that address issues of exile, diaspora, gender, politics, and culture, has known for many years that she wanted to explore the boundary between art and cinema. She grappled with it explicitly in her 1998 dual-screen installation Turbulent, the black-and-white 16mm project which captures a series of dichotomies, between male and female, order and chaos, intellect and passion.

“Turbulent was an opening to a whole new world in many ways, and an introduction to a cinematic experience, and to narrative,” Neshat said in an interview six years ago, just prior to embarking on the adaptation of Iranian novelist Shahrnush Parsipur’s book, also titled World Without Men. “Turbulent has the picture of classical film, yet it doesn’t obey the rules of cinema. It becomes very participatory because the audience is divided, looking simultaneously at two screens. And I felt that this hybrid, mixing cinema and the visual arts, had very strong potential.”

“When I first started the project, I didn’t realize there would be so many differences,” Neshat now acknowledges. “From the perspective of the production, I didn’t know how complicated and expensive it all would be. When you are working with producers, you have a very different relationship to a project and a much greater responsibility to funders. It’s also such a much larger production overall, especially for this project because it’s a historical film.”

Every phase of the project brought challenges. Neshat had never adapted a novel, for example, or written dialogue to a great extent, or tried to balance magical realism and traditional cinematic narrative. “I originally had the sense that I would not ever get too involved in narrative because I thought if I did, I would lose my signature,” she says. “But now I know that’s not true.”

Neshat faced a significant challenge in the adaptation. The storyline interweaves the lives of four characters simultaneously. “Two characters are otherworldly and abstract, and two are very earthy and their desires are normal, human expectations. For me, I had to think about how to balance the worldly and the unworldly.”

Neshat also says that Iran becomes a kind of fifth character in the film. “So there is quite a strong demand for the audience to follow the story, and for us it was quite a challenge to do this in the editing. How do you avoid losing the audience without over-directing them?”

Pre-production was especially grueling, entailing extensive, detailed research on 1950’s Iranian culture, political activity, architecture, and fashion. The shoot itself traded the familiar nine- or ten-day timeline typical for one of her art projects for aneight-week marathon in Morocco. “It was a huge task,” says Neshat simply, adding that her partner, Shoja Azari, was indescribably helpful at every stage in the process.

Neshat’s research also included delving into the history of cinema. For example, she watched the work of great filmmakers such as Carl Dreyer and Ingmar Bergman — “directors who have dealt with profound questions of religion and the existential drama of humanity” — alongside more contemporary directors such as Lars von Trier.

While Neshat characterizes herself as still very much a student of cinema, she also recognizes the impact of her experience making Women Without Men. “I think I have a certain confidence now, I feel more comfortable, I know where I succeeded, and I know my shortcomings. I know more about the balance. And I do feel good that I took those years to make the film, and if I had gone more quickly, the film would have suffered.”

Neshat’s work joins a larger arena of female artist-created feature film projects at the Festival this year, such as Sam Taylor Wood’s Nowhere Boy and Pipilotti Rist’s Pepperminta. Asked what advice she would offer to other artists based on her experience with Women Without Men, Neshat is very clear: “I think what I have learned at the end… is that one should just take the leap. I think my film is true to my own language and aesthetic [and] it also has a clear narrative line. But it could only have happened by taking that leap.”