Meet the Artists: Introducing Taika Waititi, the Man Behind ‘Boy’ 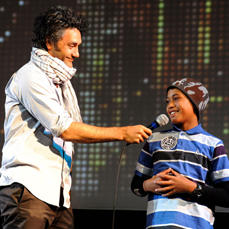 According to his son Boy, Alamein, the absent and idolized father in Taika Waititi’s inspired second feature Boy, is “overseas doing some pretty important stuff.”

Boy, who’s obsessed with Michael Jackson—Boy is set in 1984 in rural New Zealand—tells his classmates that his father is a “master carver, deep sea treasure diver, the captain of the rugby team, and he holds the record for punching out the most people with one hand.” Boy then sits down after he’s done giving his presentation about himself and his family to his class. “Your dad’s not overseas,” his seatmate and nemesis reminds him. “He’s in the same cell block as my dad.”

Boy is a memorable character—he’s a devilish little troublemaker, the watchful, de-facto parent to his younger siblings (their mother has died, their grandmother is off on an extended trip, and their father is in that cell block), and a frustrated son yearning for some kind, any kind, of attachment with his father. He and his siblings have to reconcile the idealized father they’ve imagined with the fumbling, small-time crook he clearly is—someone who is more often than not more concerned with unearthing the stash of money he hid near his mother’s house than really connecting with his children.

Waititi, who screened Eagle vs. Shark at the 2007 Festival (“now I think it’s such a clumsy attempt at a lot of things,” he says), isn’t afraid to think idiosyncratic and indelibly personal thoughts and put them on film. If Eagle vs. Shark is a little vague, Boy is observant, laser-sharp, and fondly satirical of small-town life. Waititi has an enviable ability to get inside the skin of his characters.

It’s tempting to think of Boy as an entirely autobiographical creation; it was filmed partially in Waititi’s grandmother’s home, and Waititi mentions that he has an uncle who buried some money once. Like Boy, Waititi grew up with other kids who learned to raise themselves. He even plays Boy’s father Alamein in the film, but that’s because he realized he should be playing the role after he couldn’t find a suitable actor and everyone around him kept saying, “Show us what you mean.”

“In New Zealand, the Maori are always portrayed as this strong warrior type and it’s really boring to watch,” Waititi, who comes from a strong family background in comedy, says. “The Maori men I grew up with thought they were tough but they were essentially big nerds,” which is exactly how Waititi plays the role.

But it’s the setting of Boy that is the autobiographical aspect of Waititi’s life, not its plot or characters. “Growing up in the country, most kids develop into these really cheeky, strong-willed young people,” Waititi says. “I just love seeing really young kids who are able to hold their own without any parental oversight.”

Waititi wrote Boy after he finished shooting Two Cars, One Night, which was nominated for an Oscar for best short film in 2005. Waititi workshopped Boy at Sundance Institute’s Directors Lab in 2005. “This film is more defining than the other films I’ve done,” Waititi says.

Waititi, who’s directed four episodes of HBO’s Flight of the Conchords, wants to make more comedies and wants to work in America more often, but in his own way.

“I get a bit scared by the idea of making a movie with a bag of money – I think that Americans make the bag-of-money films better than anyone else, but it’s not my thing,” Waititi says. “I don’t know how to do that. Everything I ever write is about family drama. … I’m okay with being in a small pond,” he says about working in New Zealand. “Being in a small pond is good.”