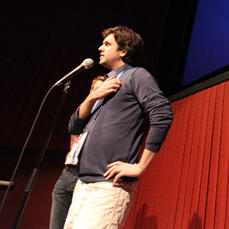 There’s never been a film quite like Bengali Detective. It has the jack-of-all-eclecticism of a big budget Bollywood musical—part detective story, part underdog yarn, part ensemble city tale—except for one unlikely detail: it’s all real. “It’s always been a dream of mine to make a documentary that could step into genre,” says Phil Cox, a 36-year-old Londoner whose second feature is a long way from the embedded combat reporting that established him as a filmmaker to watch (Cox’s reports from Darfur, broadcast on Channel 4, are credited with alerting the world to the genocide crisis there). “I wasn’t interested in making something that felt very raw or real, or a work of social commentary. I wanted to make something where you weren’t quite sure of what you’re watching. Is this a comedy, a thriller? Is this real, are these actors?”

Since Cox was looking to make a different kind of non-fiction film, finding the right location and subjects was even more crucial than usual. In visits through India, he encountered a society dealing with great change, increased crime, and overwhelmed law enforcement, as well as a conspicuous rise in private detective agencies. He was particularly drawn to Kolkata (formerly Calcutta) and its mid-century, old port grittiness. “It’s still got something of a nostalgia for the past,” he says, “and it’s just a fantastic setting for a detective film like this.”

But what about a Kolkatan Philip Marlowe or Sam Spade? “80% of directing is casting,” he says, and it’s even more crucial in documentaries because you can never know beforehand exactly how subjects are going to react to the camera. Since Cox preferred an unconventional star rather than the straight man, ex-military types that dominate the ranks of Indian P.I.’s, it took several years of searching and sifting. He finally found what he was looking for with Rajesh Ji, a portly, endearingly self-serious, fearlessly performative character who pursues cases big (triple murder) and small (shampoo counterfeiting), and copes with domestic drama through dance competition dreams. “Just like Sherlock Holmes with his violin and his opium,” Cox says, Rajesh has layers that complicate how we view him—no more so than when he ties on a headband and hoofs it to pulsating pop music.

The wildly different aspects of Rajesh’s personality represent what’s both unique and tricky about a film like Bengali Detective. It touches on serious societal and personal issues, but it’s also, to some degree, a comedy. Finding that balance, and determining the nature of the humor, was one of the biggest challenges for Cox both during the shoot and in the editing studio. “The comedy was there all the time,” he says. “It was whether we were laughing at them or with them, and whether that comedy would override the strong parts of the film.” The funniest parts of the film feature Rajesh and his motley crew of employee PI’s, bumbling through cases and cheesy choreography. “It was like, ‘Okay, are we making fun of these guys?’” he recounts. “It’s very fine, that line between farce and sincerity.” In the end, Cox had faith in the likeability of his subjects, and took pains to let them come fully alive at work, home, and play.

By constantly filming with two cameras, Cox and cinematographer Lisa Cazzato-Vieyra allowed for an editing style that’s more common to fiction features than documentaries, but the shoot was less controlled than it appears. Cases dragged on and slowly spiraled to conclusions, and as for Rajesh, Cox says “he found us as exasperating as we found him at times.” But the dancing detective’s candor is what ultimately allowed the director to realize his vision. “I’m really interested in working with stuff that has a basis in reality, whether it’s actors working in real situations, or like in this project—real people depicted in a way that we can stylize.” For his next film, he’s exploring a true story based in the American South that has the look and feel of a thriller. But for him, it’s important to find style and drama inherent in real locations and characters, and to not impose fictional aspirations and expectations upon them. “It always has to start with the real, and then we can take it somewhere,” he says. “It can’t be the other way around.”