Meet the Artists: Mohamed Al-Daradji, A Son of Baghdad 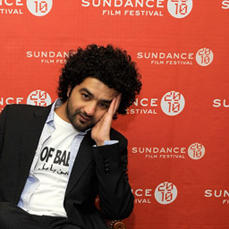 When Hollywood makes movies about the war in Iraq, location shooting often takes place in Jordan or the deserts of the American Southwest, which provide a safe, if not always convincing, substitute for the real thing.

But when Iraqi filmmaker Mohamed Al-Daradji‏ embarked on his latest feature film Son of Babylon, he decided that only authentic locations would suffice. The movie, which is playing in the Festival’s World Cinema Dramatic Competition lineup, was filmed over 65 days in seven different cities in Iraq – including war-torn Baghdad and Basra. The result is a singular war movie in which the feeling of imminent danger hovers over every scene.

“Making independent film is always difficult,” Al-Daradji says. “But to do it in Iraq is a nightmare.”

The director said he worked with an entirely Iraqi crew after his team members from the U.K. and France left the production due to security fears. Financing for the film came entirely from foreign sources, since the country’s film industry is practically non-existent.

At one point during shooting, Al-Daradji had to deal with the potential mutiny of 500 female extras who were demanding their wages. The production eventually avoided a mass walkout thanks in part to last-minute financing that came from Sundance Institute, which also helped the film’s producers locate other sources of funding.

Filming took place between October 2008 to February 2009, with the production team traveling north to south through cities including Sulmaniyah, Nasariyah, Kutes, Neger, and Babylon.

Son of Babylon takes place in 2003 shortly after the fall of Saddam Hussein. The film tells the story of 12-year-old Ahmed and his elderly grandmother who embark on a cross-country journey in search of Ahmed’s father, a soldier who vanished during the Gulf War. One of the recurring problems they face along the way is a linguistic barrier – the protagonists are Kurdish and only Ahmed is proficient enough in Arabic to navigate the country’s infrastructure and public transportation systems.

The two protagonists antagonize each other during the journey but this odd couple also shares isolated moments of humor. Extroverted Ahmed (Yasser Talib) is loquacious and frequently obnoxious while his grandmother (Shazada Hussein) is mostly silent. The director found his actors during a six-month search in villages throughout the country.

Using non-professional performers in real locations, the movie evokes the aesthetic of post-war Italian neo-realist classics like The Bicycle Thief and Open City.

“I have been inspired by Italian cinema … and of course [Roberto] Rossellini is an important filmmaker of his time for me,” Al-Daradji says. “The way Italy was post-war, when he was making his films and the way Iraq is now, as I make mine, are very similar situations.”

Born in Baghdad in 1978, Al-Daradji studied fine art in Iraq and then went on to study film and television at the Media Academy in Hilversum, The Netherlands, where he worked as a cameraman on documentaries and other productions. He then traveled to the U.K. to complete master’s degrees in cinematography directing at the Northern Film School in Leeds.

The director says that making Son of Babylon has taught him a lot about his own country – especially the Kurdish language, of which he knew little before beginning the movie. “I saw it as challenge for myself and my filmmaking and I have been rewarded by discovering more about Iraq.”