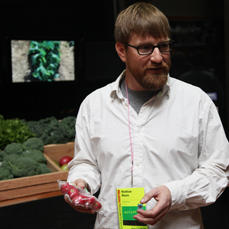 Hungry for art with your food? Wonder where your food comes from? As part of the Sundance Film Festival New Frontier program, farmer and visual artist Matthew Moore will have a video installation in the Park City Fresh Market grocery store, showing the long trek your food has been on to reach your mouth.

Moore is a fourth generation farmer, working on the family farm west of Phoenix, AZ, land his grandfather started plowing in the 1920s. Like a lot of teenagers desperate for a change, he left the farm after high school. He planned to return to the farm with an economics degree but had one problem: he couldn’t stay awake in econ class. So he ended up with an art history degree with a major in studio art as a backup.

“I took a sculpture class as part of a requirement and that was it,” Moore remembers. Farming had already informed his artistry through his work with objects and design working the crops. When he finally returned to the farm, the Phoenix sprawl was encroaching. Moore wanted to speak to the changing landscapes, both literal and political, with art.

“At first I was really pissed off about losing the agriculture land. So I started to research what this was, what we were losing,” Moore says, referring to the economics, the distribution of food, what begat what. By going to zoning meetings, he learned that developers were talking the same thing— negotiating yield of crops.

Moore felt that the loss of place people feel from suburbia and cookie-cutter housing is the same detachment people have from their food.

“Instead of pointing fingers I started pointing thumbs, and start to dissect how we distribute food.” Moore’s farm produced 350 acres of carrots from January until August, harvesting 4,000 50-pound bags per day, six days per week. Yet Moore had never seen any of those carrots in a grocery store.

“It makes sense because you have a distributor. There becomes this separation. At a farmer’s market the farmer is standing in front of you. If his carrots taste like shit, the next time you come back you can tell him that. The farmer needs to make a serious decision on how he is going to change his product. On our scale, complaints are so far back, we concentrate on the most efficient gain— how many carrots can we get per acre. I’m not standing around in the fields, I’m mostly on the computer pushing numbers.”

In the market, there is no dirt on the food, no sense of work. When you grab something off a large pile of fruit or vegetables, you don’t feel like you are taking the last one, there is never an empty shelf. In order to reconnect people, Moore examined the life cycles of the food. Looking at aerial photos Moore studied the soil and the history from desert to farm and used it to inform his artwork.

He also began to convert sections of the family’s conventional farm into small organic plots, the first of which was a CSA (community-supported agricultural) with a local partner and his wife growing 70 varieties of vegetables. Working with time-lapse photography, he makes videos of the different plants’ life cycles, drawing a visceral connection to our life through the imagery.  If you knew the time that goes into each plant, use of the land, water and manual labor, if that was present with everything you eat, how would that change the way you consume?

The Festival marks the first time Moore has set up the installation, hoping to expand to other crops and going to markets worldwide through a nonprofit system for which he hopes to find advocates to help with distribution. His seed recording system makes a time-lapse visual record of the growth while recording air and soil temperatures and rainfall. Along with seven units on his farm, one is currently set up in an Italian winery.

At the New Frontier on Main, Moore will have another installation of four video screens, showing his farm and other plant life cycles, with the actual food available for free under the monitors.

As anything else that becomes popular, Moore notes: “Food is real sexy right now.”