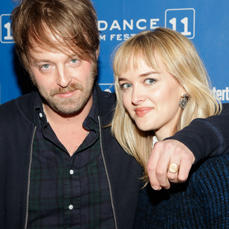 Before the Premiere of The Lie. Photo by Anna Webber.

You might recognize Joshua Leonard. “I think of myself as a guy who was lucky enough to make a living as an actor for the last decade – but only as of the last few years have I felt I was any good at it,” Leonard admits. His many roles include two textbook examples of independent cinema – the early benchmark The Blair Witch Project (which screened at the 1999 Festival) and the recent breakout Humpday (which screened at the 2009 Festival).

But Leonard found a voice in indie film through storytelling, particularly in improv acting, “where you are using a storyteller brain, that writer brain, as well as the actor side.” His feature fiction debut as a director, The Lie, will screen in this year’s NEXT section.

With a theater director father, Leonard acted as a young child but then rebelled as a teenager and stopped acting. After working as an editorial photographer and for Mystic Fire Video doing various filmmaking gigs, Blair Witch brought him back to acting. In his early 20s in New York, still being rebellious and figuring out how to fuel his creative pursuits, he was cast because he fit the character and could use a camera well. The film became a huge sensation beyond the indie film world, playing on over 1,000 screens and making 140 million dollars.

What was the effect on Leonard of being in an indie film that was so wildly popular? A group of young 20-somethings beat many Hollywood films at their own game of marketing and box office success. Which made them famous by proxy, at least at that moment. “Then the fact that we didn’t go on to be huge superstars was somehow our fault,” Leonard says with a laugh.

While working non-stop as an actor this last decade, Leonard has quietly and consistently been making films as well. In between acting jobs, he has made many music videos, the short film The Youth in Us (which screened at the 2005 Festival), and he’s the co-director of the doc Beautiful Losers (2008).

“When I read [a script], I see another actor. I rarely see myself in it,” he says, noting that he’s not trying to sound pretentious. For some reason when I read The Lie, I knew it was a story I wanted to tell and I wanted to play that character.”

Leonard found the story of The Lie in the short story by T.C. Boyle in The New Yorker in 2008. Leonard was hooked on the first reading. “Even though I’m not a father or married, there were so many different things about the character, about the fumbling ways that we become adults that spoke very directly to me,” he recalls.

Rather than being an actor who yearns to try out directing, Leonard found a different kind of solace in using himself as the main character. “There was a specific tone that I didn’t know if I had the ability yet as a director to communicate to someone else,” he says. “By using myself there was something utilitarian about it.”

Leonard also isn’t trying to be an indie star fighting the system. Growing up, he liked films as entertainment, but found the indie world inviting in its size and style, noting filmmakers—Hal Hartley, Nick Gomez, Allison Anders, and Steven Soderbergh—who maintain a specific vision while understanding their audience. It had nothing to do with budget, and Leonard believes filmmakers have to take responsibility for a film’s size.

“I think it’s important to know what film you are making,” Leonard says. “We got a super talented team of collaborators on board, and the only real stakes are if you can pull off your original intention. The subject matter was dark enough, the protagonist was flawed and fallible enough, that this was never a film I would have tried in a traditional movie-star-financed-overseas-presales model. It never would have happened. And if it did it would have been such a watered-down version of what I wanted in the first place.”

Leonard also appears in Higher Ground at this year’s Fest, another feature directing debut, by Vera Farmiga. “Even though she is an Oscar-nominated actress and done huge movies, I consider that film as independent as anything I’ve ever acted in,” he says. “A specificity of vision behind it from the word go.”

With future projects in the works of all sizes and producing a new film by Allison Anders, Leonard wants to keep telling stories. Acknowledging that it sounds touchy-feely, Leonard says, “Filmmaking to me feels like a challenge that can last a lifetime. There are so many different elements at play, from the visual to the storytelling to the performances, that it feels like I could spend my life trying to become great at it and never be bored.”