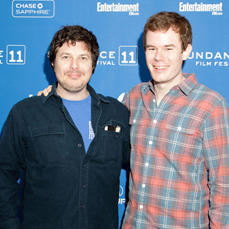 Judging from the coverage about them, you get the sense that some of the directors and actors associated with the mumblecore movement would rather lounge on a bed of nails than hear that term again.

It seems as if mumblecore, the genre of low-budget, sexually frank, microscopically intimate movies about characters trying to define their lives, usually made with a director’s friends and even family, is something those directors and actors used to do, not something they still claim as their own. Then there’s 29-year-old Joe Swanberg, who—more than the Duplass brothers, Greta Gerwig, Jess Weixler, or Andrew Bujaski—has kept the mumblecore torch burning.

Swanberg’s Uncle Kent will be screening in the Spotlight showcase at the Sundance Film Festival this year. An alternately funny, insightful, and cringe-inducing story about Kent Osborne, a Los Angeles cartoonist for a children’s show, the film follows Kent as Kate, a savvy New York journalist he met on Chatroulette, comes to L.A. to visit him, even though she’s in a relationship already in New York.

Since 2005, Swanberg has directed eight films, several shorts, and a web series, and acted in numerous films made by his friends (Kent Osborne, the name of both the lead in Uncle Kent and his actual name, has been a frequent collaborator with Swanberg).

“I developed this deep fear of getting rusty,” Swanberg says about his prolific output. “I watched too many people flounder around trying to get their next project done, and I’m terrified to death of that.”

He still makes most of his money as a web developer, even though managing the work required to create his movies takes most of his time. “One of the things that’s frustrating about having such small budgets is that I have to do all these things I don’t think I’m that good at,” Swanberg acknowledges. Despite one New York Times writer’s assessment that Swanberg is “averse to the Hollywood food chain,” he says he would be “totally up for” making a studio film, if he could retain creative control.

Whether it’s because he makes films so frequently, or because of his talent, Swanberg is holding fast to his art.

“He’s committed, and he’s learning in front of us,” says South by Southwest Film director Janet Pierson. SXSW and Austin have long been associated with the mumblecore movement. “I felt like with each film he learned better filmmaking skills and got better with his actors,” Pierson says. “He has an extremely acute sense of social observation and the way people talk and relate to one another nowadays.”

The insight Swanberg has trained on his characters he can also apply to himself. “Initially I thought it was fraudulent to think about what I wanted to say ahead of time because it was all supposed to happen on set,” he says.

Now he spends more time talking with his actors before filming. “I’m more interested in other people than I am in myself,” he explains. “It’s probably why I’m making movies—it’s the art form I found that allows me to interact and collaborate with people the most where we can skip a bunch of levels of formality and get into talking about stuff.”