Meet the Artist: Dee Rees on Her Debut Feature, ‘Pariah’ 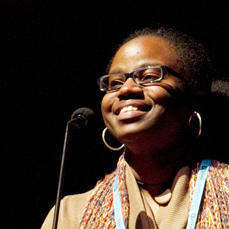 Five and a half years ago, as she began writing the script that became Pariah, Dee Rees was coming out to her family. Like the family of 17-year-old Alike in Pariah, Rees’s parents aren’t accepting of her sexuality. During the Festival, audiences may speak of Pariah as a coming-out movie, a film in which Alike (Adepero Oduye) realizes her potential when she makes the decision to reveal what everyone may have already guessed about her.

But for Rees, Pariah is everything but a coming out movie—it’s a coming-of-age film, she says, a crucial distinction for the director. Alike is “never in denial about who she is,” Rees points out—it’s most of the people around her, including her family, who won’t acknowledge what’s staring them in the face.

There are other autobiographical touches to Pariah—namely the title, a word the 33-year-old Rees uses to describe herself as she was coming out. “I wasn’t butch enough to be butch and not feminine enough to be feminine,” the Nashville native recalls. “I felt like a pariah. I didn’t fit in the gay world.”

From that confusion, Rees has crafted the clear, emotionally honest story of a Brooklyn girl who’s tugged back and forth between the heady, open sexuality of her out friends and the clubs they visit and her protective but stifling family.

Pariah’s final, affecting scenes manage to break your heart while laying down the kind of magic that makes you want to leap from your seat to cheer on its gutsy, poised protagonist. The movie feels lived-in and personal, tough because of the stark choices Alike has to make, memorable because Rees and the film’s cast make you feel like you’re watching faulty and nuanced people rather than actors emoting.

The original script was, by her own admission, a “140-page monster” whose length she slashed to create an acclaimed short (also titled Pariah) that played at the 2008 Festival, among many others. After two years of fundraising and a 19-day shoot, Pariah will first screen for audiences in the U.S. Dramatic Competition on Day One of the Festival at the Eccles.

One of the reasons Pariah feels so assured is because Rees injected creativity into the rehearsals with her actors. “I don’t like going over the lines,” Rees says. What’s more crucial to her is that the actors understand the relationships between their characters, so she had Adepero Oduye, who’s done mostly theatrical work, participate in a mock family therapy session with the actors who play her father, sister, and mother (Kim Wayans, in her first non-comedic role).

“Right away people fell into their dynamics,” Rees says. She had them send birthday and anniversary cards to one another and she had her lesbian characters dress androgynously and took them to a lesbian party. “When we got to the set we had that rapport,” Rees recalls. “We never did a reading.”

Rees was a Fellow at Sundance Institute’s 2007 Screenwriters Lab and its 2008 Directors Lab. “In the Directors Lab, they challenge you to workshop the most difficult scenes,” Rees explains, so she brought Oduye and Aasha Davis, who plays Alike’s sexually ambiguous high school friend Bina (a character who may or may not be lesbian and may or may not be leading Alike along), to the Sundance Resort, where the Labs take place in the Wasatch Mountains. Oduye, to hear Rees tell it, isn’t a big fan of steep and perilous ski lifts, but Rees sent the actresses off on one of the lifts together anyway.

“That was the best rehearsal we could have done, I think,” she says.

Rees’ goal was to subvert audiences’ suspicions about what a movie about a 17-year-old black lesbian on the verge of defining herself would be like.

“People think they know how it’s going to look and feel and we wanted to thwart people’s expectations on every level,” she says. “We’re really hoping this film will be impactful for gay youth,” she says. “This film will make a way for people to not feel like they’re pariahs.”