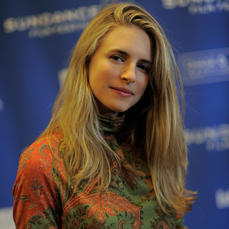 In the indie film world, you’ll often find talented people having more than one job. When you see Brit Marling on screen, you’ll see a vibrant young actress in a strong role and innovative narrative. But Marling also helped write that story and make the film exist as one of the producers. And not in one feature at the Festival this year, but two – Another Earth, screening in the U.S. Dramatic Competition, and Sound of My Voice, in the NEXT showcase.

Growing up in Chicago, Marling got into theatre acting. As a kid, she thought, “if it was fun, you probably couldn’t make a living doing it.” She’s since changed her mind about that and drifted away from theatre acting. “I learned a lot about plays and acting,” Marling says, “but I didn’t know anything about the world. What could I bring to Othello, being naïve as a human being?” She took it upon herself to grow as a person in college – taking liberal arts, anthropology, and economics classes at Georgetown University. She also realized if she could write scripts, she could write stories that mattered in some way to her, with the women playing more active roles.

She, Mike Cahill, and Zaj Batmanglij were all at Georgetown together and entered in a 48-hour filmmaking competition (their friendship endures: Cahill is the director of Another Earth and Batmanglij is the director of Sound of My Voice). They were scrappy—they got friends involved, borrowed locations, broke furniture—and when the cops arrived after the neighbors complained, they got the cops to act in the film.

“It didn’t win any prizes,” Marling explains with a laugh, but the experience got her going. She dropped out of school and went to Cuba with Cahill to make the documentary Boxers and Ballerinas (2004), using the same guerrilla techniques they employed in their 48-hour adventure, teaching themselves every aspect of filmmaking in the process.

Cuba taught Marling other lessons. “Everything there is so scarce – food, paper, a pen is a luxury,” she recalls. “Living there changes your perceptions on things. I can live with a lot less than I thought I could.”

She has kept working the same way, being a producer out of necessity. “Once you make the train leave the station, other people start running after the train and want to get on board,” Marling says. “We ended up having a lot of amazing producers and collaborators who helped make [both films] possible. It turns out you can’t make a fiction feature film all by yourself!”

Both films are essentially love stories but have sci-fi aspects. Another Earth is set in the future, when a second, identical Earth is discovered. In Sound of My Voice (directed and co-written by her fellow Georgetown alum Zal Batmanglij), Marling portrays a cult leader who claims to be from the future.

“Playing a cult leader is so far outside of my life,” Marling says. “From an acting perspective, I believed I was from the future, and my doubts were like anyone’s doubts: can I really be an actor or writer? It’s grounded in the mundane and in emotions, but being locked in a time period that’s not your own. As a writer, it’s interesting the way sci-fi can create original juxtapositions in normal human dramas.”

Sci-fi also lets Marling investigate the nature of belief. She notes that both of the films she’s involved with at this year’s Festival are “obsessed with faith.” “In Another Earth, how do you rebuild your life when everything has been burned to ashes?” she asks. “How do you have faith in moving forward as a human being? And in Sound of my Voice, it’s a meditation on belief and the possibility of being more than what the eye can see.”

Which is comparable to having faith in making a film. While she calls herself a skeptic, Marling believes that she is an even stronger romantic than she is a skeptic. In other words, the skepticism protects you – in order to fall in love, you need the strongest, deepest beliefs to be confirmed.