Meet the Artists: A Revisionist’s History in A Film Unfinished 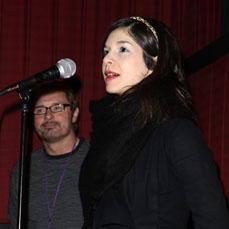 “We see nothing,” says Yael Hersonski, the director of the powerful documentary A Film Unfinished, which will have its world premiere in the World Cinema Documentary Competition. “Every day we are bombarded by images of atrocity, but we cannot really see them. We simply look, and say, ‘Oh dear.’”

Hersonski should know. Following the death four years ago of her grandmother, a survivor of the Warsaw Ghetto, Hersonski began searching museums and archives for materials that would convey her grandmother’s experience. “She chose to live her life without talking about the past very much,” says Hersonski, “so after she died, I first went to find her testimony in the Yad Vashem museum [in Jerusalem]. There were 10 pages of text, but it told me nothing. So I was at zero.”

Hersonski then began to view film footage and stumbled across a series of sequences staged and shot in 1942 in the Warsaw Ghetto by a Nazi film crew. “This is something that mainly archivists see because it is silent and unfinished,” she says. Hersonski was stunned by the images. Not only did they depict the horrific conditions of daily life but they featured clearly staged segments in which seemingly wealthy Jews nonchalantly step across the bodies of others before enjoying sumptuous meals and dancing. The footage sparked intense questioning for first-time feature director Hersonski, whose previous work was as an editor.

“For some time, I had been interested in exploring the testimonial value of the cinematic image, and of footage that was shot during times of war,” she explains. “I wanted to think about footage that was mainly used for illustrating a narrative and just accompanies a story. In most cases, the story is in the foreground and the image is in the background. I wanted to put the image in the foreground and ask what I could learn about the past.”

Hersonski achieves this intense focus by screening all four reels of the silent, unfinished film interspersed with commentary by survivors viewing the footage, as well as a Nazi cinematographer who participated in its production. Throughout, viewers cannot forget that what they are viewing — both Hersonski’s film and the footage from the ghetto — is entirely constructed. We not only hear the sound of a projector but see the leader on the head and tail of each reel, while also comparing the descriptions of the footage as it is explained by the survivors and cinematographer and our own interpretations. In this way, we are invited to question not merely the veracity of the footage but the ability — or inability — of images to capture reality, and similarly, of the ability of filmmakers to hide the misery and pain of subjects they photograph.

“When I think about that the fact that there was a film crew with lighting equipment, and cameramen, and someone directing them — this is, for me, part of the war,” Hersonski says. “When you realize what is happening outside the frame, it changes how you relate to the frame itself, and this is something I want to think about when I am documenting a human being. What is the moral value of the documentation? Where do I stand in front of someone’s suffering?”

Hersonski’s film asks this question, but perhaps more importantly, enacts it formally, opening up a space within which viewers are able to move beyond merely “seeing” atrocity to far more complex moral, ethical, and political questioning.