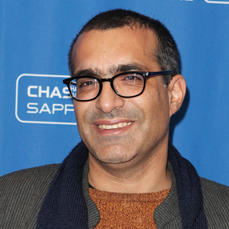 Israeli filmmaker Yossi Madmoni brings the powerful portrait of familial conflict Restoration to the Festival this year, demonstrating deft directorial skills and a filmmaker to watch in the future. The film, written by Erez Kav-El, tells the story of an antiques dealer dedicated to restoring old furniture who gains a new apprentice while at the same time is losing his son. Screening in the World Cinema Dramatic competition, Restoration is at once a very specific story and a new take on classic themes of generational strife, and Madmoni’s graceful attention to the nuances of performance creates a film of surprising impact. Madmoni, who studied filmmaking at the Sam Spiegel Film & Television School in Jerusalem, has directed one previous feature film, The Barbecue People, which he wrote, and numerous TV episodes. Below, he talks about working with his actors to balance the need for clarity and ambiguity in a film in which what’s seen and heard are as important as what remains ambiguous and unknown.

What made you want to be a filmmaker?

Yossi Madmoni: For me, the crucial turning point on the way to becoming a filmmaker took place when I was 15. Until then I had studied painting and dreamed of becoming a famous painter, and films were an entertainment of sorts, not a vocation. At the age of 15, I wandered, by mistake, into an art house French film. No subtitles and I speak not a word of French. It made sense for me to leave the theatre after a minute or two, yet to my surprise, I found out I understood every bit of dialogue and every conversation. Image and setting did all the work for me. I understood the characters, motivation, plot progression, the lot! It was magical for me. I realized you can tell a story in images, that image is a powerful tool and in this medium surpasses even the spoken word. I felt I wanted to be part of this magic.

What attracted you to Restoration as a project? What made you want to make this movie?

Madmoni: My choice to do this particular script came first and foremost from the choice of subject-matter: A father-son relationship, subject matter that, for me, is always a known and fertile territory, but more than that, the sense that the near abstract defining framework of the screenplay would allow me to build a world and ambiance just as important to the narrative. It is a script that allows a director to breathe and does not force him to chase the plot. With it, in spite of the seemingly understated narrative, there is a powerfully dramatic story in this screenplay, almost mythical or Shakespearian – of the triangle of a father, his biological son, and an adopted son; at its edges exists the lesser, though better known, story, that of a triangle among two men and a woman. It is the first time I directed a movie that I did not write the screenplay for and I joined the project at a relatively late stage. Something in this challenge was important for me as a step in my perception of myself as a director.

Sasson Gabai gives a terrific and understated performance as the furniture restorer: can you talk about how you worked with him on the film?

Madmoni: Sasson is a tremendous actor. It isn’t for nothing that he won the European Oscar for his role in the film The Band’s Visit. To guide Sasson on set isn’t difficult. Sometimes it’s too easy and you feel a director is not needed, that you are really redundant. The most significant course I took working with him was surrounding him with non-professional actors in the small parts of other craftsmen and this led him to a more naturalistic style of acting. Beyond that, the most significant courses of action preceded the work on set: First, having him thoroughly trained in the restoration profession in a real workshop by a real artist; second, conducting a Sisyphean battle – on my part – as a director to persuade him that the character wasn’t “bad,” that there is no need to soften the character through acting, that there were no “positive” aspects missing for him, and that a difficult father, bordering on the violent, can also be a leading character driving a film; and third – possibly the most important – deciding that there was no need to give direct exterior expression to all we know about the character. We created a complex biography for the character but I didn’t want it too externalized. I wanted to work through limiting elements, not adding superfluous detail.

The apprentice, played by Henri David, remains ambiguous throughout, and the wife, played by Sara Adler, is a complex character – can you describe how you were able to create such a remarkable balance of characters in the film?

Madmoni: The character of the apprentice was the one we deliberated on the most while writing, on set, directing and while editing – how much to expose his history, his motives, his psychology? The final decision was to be as economical as possible, to leave it as a not quite resolved enigma, to give the sense that we’re talking of a young man from a rich family who rebelled and moved to street-life, a young man with an artistic musical past, but no more. The screenplay gave the character some more details and put a little more accent on the family he came from. Direction reduced some of those details and they were cut even further during editing. It was a process, a process during which we came to realize that if the character does not remain an enigma for the viewer, with just a few clues given, then his effect will be the shallower for it.

As for Hava’s character, she is a pregnant woman having an affair with the much younger apprentice – a taboo. The decision to create a character that seems to be happy and full of life in sharp contrast to her actions testifies to complexity, existential desperation, and an unstable family life. I thought this contrast makes complex psychological analysis to be unnecessary and allows for a very strong and multi-faceted statement about the character.