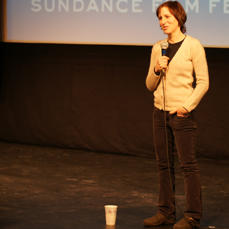 Kelly Reichardt has a long relationship with Sundance, from her first feature River of Grass (1994) through the popular Old Joy (2006) and this year’s Meek’s Cutoff, the story of Western pioneers lost on the trail. Before River, Reichardt worked in the art department on many independent films, including seminal features by Hal Hartley and Todd Haynes’s Poison; she is still close friends with Haynes.

“I worked on a lot of people’s first film,” Reichardt remembers. “Then I thought, ‘I could work this hard on my own film.’”

Although she didn’t know how to make a film, she didn’t necessarily want to go to film school. She was motivated by place. “I had never seen the part of Miami I grew up with on film,” she says. “When I was working on these small crews on first films I thought maybe I could write something for Miami. If you watch River of Grass you’ll see I haven’t quite figured it out. I didn’t know about screenplay structure. I was just breaking down movies I liked on note cards and trying to figure out the rhyme or reason of it.”

But it wasn’t an accident that River was a type of non-road movie, deconstructing the genre. “Not that I would have thought of any of those words at the time,” Reichardt says with a laugh.

Shooting still photography since she was 12, she started shooting sync sound super-8 film in a non-traditional sense. “I was always filming people telling stories,” she recalls. “I was always driving cross country and meeting people along the way and asking them to tell stories.” In the years in between River and Old Joy, she tried pure abstract filmmaking but always came back to wanting a story to latch onto.

“But I have a great appreciation for non-narrative films,” she says. “If I go see Peggy Ahwesh’s films or an installation by her and you watch for 20 minutes, you start making associations and putting together a puzzle in your mind. Or you watch a Peter Hutton film, you are looking at his footage and by the third reel you realize, ‘Oh, this is about everything in life. How did it get to be that? I was just watching a boat on the Black Sea.’ I’m very envious of that approach.” In an inspired decision, Reichardt has added short films by both of those filmmakers to a DVD of her own film, Old Joy, to help more audiences see their work.

Combining her love for non-linear narrative and her attachment to plotted story, she has found a fruitful collaboration with writer Jon Raymond. Old Joy was first a short story by Raymond, then Reichardt wrote the script. Space and the characters’ environment heavily affect the film’s tone. With Wendy and Lucy, they came up with the idea together, then Raymond wrote the story and she the script. Raymond wrote the Meek’s Cutoff script with Reichardt giving ideas and editing points.

“He has that skill – you’re reading one of his stories and you think it’s about two friends and this moment,” she says. “Then you realize, ‘Oh no, it’s about something much larger.’ It dawns on me slowly; it isn’t evident when you’re reading it.”

Reichardt spends a lot of time driving around America when she’s scouting locations for a shoot. “For Wendy and Lucy I think I scouted 39 states,” she says. “Then I shot in Portland—you can see that Walgreen’s outside Jon’s window. For Old Joy I went to every hot springs in America. We shot at the one he wrote the story at. But for every place, it informs you. When I’m driving around with my dog, it’s really a time to get to know the movie and its through-place.”

Although all of her films have been intense adventures for her, making a period piece in the West was a particularly massive undertaking, making Meek’s Cutoff her “biggest” film in scope. “It was physically hard. 110 degrees,” she recalls. “The production designer got heatstroke and then seven days later we took an actor to the hospital with hypothermia. The desert kicks your ass. Then you see the most insane sunset you’ve never seen before with all these people you’re working with and go have dinner. You can only get to that [experience] through the hardship of the day.”

An intense shoot takes on its own life and starts controlling the film, pulling away from the script. She says she’s constantly throwing lines from the script away during a shoot. “How can we get away just showing it? What can the camera do and how do you move people through a scene? That’s where the excitement of filmmaking is for me,” she says. “Then I’ll be in the editing room and it will come together and Jon’s story reveals itself to me again.”

To keep expectations under control, Reichardt shies away from calling Meek’s Cutoff a Western. Genre trappings are a useful resource for her, to make the locations and character set up the film in a recognizable way. Then she bends those familiar aspects to tell the story in her own style. The technique pays off.

“These are small moments of the journey. It’s not the journey. They are all a moment of it. And if you deal with a smaller time frame, you can really get more into the details,” she says. “It’s like being attracted to the B-side of the record. Get a little deeper.”