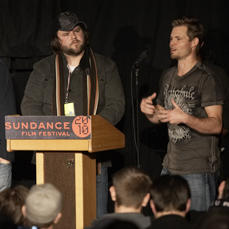 From the inbred freaks of The Hills Have Eyes to the cannibalistic rednecks of The Texas Chainsaw Massacre, the hillbilly murderer is a familiar archetype of the horror genre.

But what if instead of being the killer, the hillbilly was actually the good guy for once? This role reversal is the jokey premise of Eli Craig’s feature film debut, Tucker and Dale vs. Evil, a satirical take on horror movies that pits two bumbling rednecks against a pack of mean-spirited college kids. The gory comedy plays in the Midnight section.

“If the movie has a message, which I hope it doesn’t, it would be that you shouldn’t judge people by appearances,” says Craig.

The movie stars Alan Tudyk and Tyler Labine as a pair of dim-witted hicks who repeatedly cross paths with a group of college students on spring break. The protagonists are frequently mistaken for raving murderers by the over-excited co-eds. When bodies begin piling up in a series of freak accidents, it’s inevitably blamed on the luckless protagonists.

Craig, who co-wrote the screenplay with Morgan Jurengson, says that he and the cast had fun breaking down the stereotypes of hillbilly massacre movies. “I’ve spent time in the backwoods and I have to say that rural people living simply are often the nicest people you can meet,” he says. “It’s the frat kids I worry about.”

Craig wanted to avoid making a one-joke movie. “It became a question of how many times could we play this joke and make it a feature-length film. It was important for me to have these full-fledged character arcs that went beyond the hijinks.”

Tucker and Dale was filmed in the Calgary area in just three weeks. Some of the most challenging scenes to film were also the bloodiest. A scene involving one character’s unfortunate swan dive into a wood chipper required a stuntman, some split-frame optical effects, and a whole lot of luck. And luck they had: The stuntman landed his mark on the first try.

Craig, who is the son of actress Sally Field, said that it took about four years for the project to come together despite its miniscule budget. “We wrote the script in about three months and then it was just a long, long list of rejections from the studios and from anyone and anybody with money,” he recalls. “It became a whirlwind once it got through. You’re either waiting too long or you’re too rushed.”

The filmmaker says he’s fully aware that he’s following in the footsteps of another tongue-in-cheek horror auteur whose first name is Eli— Eli Roth, the director of the Hostel movies.

“I think all Eli’s are a little bit crazy,” he says. “It comes with the territory. If you name your son Eli, he’ll probably star in a horror film or direct one.”