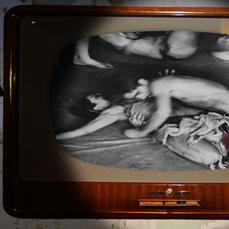 When Lynn Hershman Leeson first recorded footage for her latest film, she wasn’t a filmmaker, didn’t own a camera, and had no overarching plan. She just knew that something important was happening, and that somebody needed to document it.

Beginning in the late 1960s with raw recordings made on a borrowed camera and continuing throughout the next several decades, pioneering multimedia artist (and eventual filmmaker) Hershman Leeson interviewed fellow feminist artists who were changing the face and direction of art in America. “It just seemed that what people were doing was really interesting,” she tells us. “I wanted to hold onto that moment, and to understand it.”

More than 40 years in the making, the result is an ambitious and deeply personal documentary feature called !Women Art Revolution, which screens in the New Frontier section of the 2011 Sundance Film Festival, and will be presented alongside a multimedia, multi-platform installation called RAW/WAR.

Epic in scope and intimate in scale, the film tells the “secret history” of feminist art in America, while RAW/WAR invites the public to fill in the gaps of Hershman Leeson’s condensed and necessarily selective narrative. At the Park City installation during the Festival, visitors can upload text, images, and video, creating a living, multi-phonic history and resource.

Hershman Leeson’s progressive and inclusive approach is of a piece both with her experimental, interactive art (her three previous films, Conceiving Ada, Teknolust, and Strange Culture, all screened at the Festival), and with the larger collective movement to which she belongs.

“It really was a break with the art that came before,” she says, noting that feminist artists first emerged when minimalism—an abstract, ascetic, and predominantly masculine movement—ruled galleries, museums, and schools. “The feminist movement absolutely fought to create its own identity, to collaborate, to re-envision the idea of craft, to deal with issues of social justice, to bring into the media the issues that were endemic to the culture in a way that had never been done before.”

Recognizing that seismic changes were afoot, San Francisco–based Hershman Leeson interviewed trailblazers like Judy Chicago, Joyce Kozloff, and the Guerilla Girls whenever and wherever she could, from living rooms and galleries to acoustically agreeable bathrooms.

In 2004, Hershman Leeson started sifting through her accumulated boxes of films, tapes, and DVDs and found evidence of what she calls a “hidden history” of feminist art. It took three months to merely watch the hundreds of hours of footage. She struggled to find the right shape for the film, enlisting four different editors to help whittle the film down to 90 engaging minutes.

“There’s so many interesting stories that one could tell,” she says. “That question of the narrative of history, which is fragile and malleable, becomes part of the film itself.” While the film is an engaging and often revelatory account of the movement, it represents a necessarily focused version of what’s really a much larger story.

That realization inspired Hershman Leeson to open the project in two novel ways. In collaboration with Stanford University, she made the raw interview footage freely accessible online, clickable, and openly available to the general public. “The film has no outtakes,” she says. “Everything is available.” Also, in collaboration with YouTube, she launched the RAW/WAR website, which solicits additional, user-supplied documentation and footage.

“There was the question of the things left out, and how to accommodate the things you don’t find in history,” she says. “The idea was to let go of the idea of authorship and create a community, a democratized way of curating and getting information.”

For her installation at New Frontier, Hershman Leeson brings the project into the physical realm. Park City users will have the opportunity to literally shine a light on that history, pointing Wii-rigged flashlights at virtual closets to unlock various chapters in the story of feminist art. “It’s interesting to be able to use really advanced technology in order to go back and retrieve history,” she says.

Hershman Leeson has long worked at the crossroads of art and technology. From experiments in video from the late ’70s to early ’80s forays in interactivity, she’s been drawn to questions for which there are no easy answers, art for which there’s no precedent, and projects that have no clear end.

“Technology in art had no history,” she says. “I had the option of creating its history and also a future for it. I found that really appealing because I wasn’t competing with 2000 years of painting or sculpture. The involvement was also a kind of political act. This was work where people had choice, where they weren’t just looking at something, but actually creating it.”

More than 30 years later, those notions find an ideal expression in the ambitious, collaborative RAW/WAR, a proudly incomplete work that nevertheless promises to be one of the most expansive historical documentations ever attempted. By engaging with the project one becomes part of the discussion, and that discussion in turn creates a ripple in the larger wave of feminist art.

Form and content are one. For an artist who has always been several steps ahead, either by anticipating online interactions or conducting interviews out of a vague, if urgent, hunch, New Frontier at the Festival is a place to call home. “I think I still live in the present,” she says, laughing. “Which is what most people consider the future.”