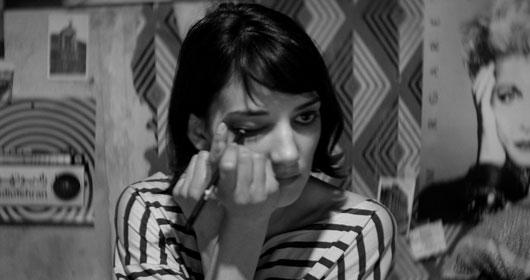 Film and music go together like [blank] and [blank]. We’ll leave the platitudes to you. But if you’re stumped, today’s Sundance NEXT FEST program announcement may elicit some ideas.

We’ve just revealed the lineup of films and music acts that will headline the Sundance NEXT FEST summer festival, running August 7-10 in Los Angeles, and headquartered at the Theatre at Ace Hotel Downtown Los Angeles. The festival will pair six Los Angeles film premieres with either a special music act or a conversation that brings together filmmakers with those who inspired them. So, to fill in the blanks above, it’ll go something like this:

Three additional films, including the elegiac Kumiko, The Treasure Hunter, the Jason Schwartzman-led Listen Up Philip, and The Guest, will be followed by intimate conversations between the artists involved in each film.

Of course, no proper festival overlooks one other exigency: a kickoff event. That’s why we’ll be getting together the night of Thursday, August 7, to resurrect Napoleon Dynamite at Hollywood Forever Cemetery for a 10th anniversary screening. Tickets ($15-25) for all events go on sale to Sundance Institute members today and all others tomorrow at sundance.org/next.

For a bit of a closer look behind the curtain of NEXT FEST, we chatted with Festival Director John Cooper and Director of Programming Trevor Groth about what to expect at this summer’s fest.

Park City is synonymous with the Sundance Film Festival, and that sense of place is a huge part of the Festival experience. Los Angeles is a far cry from that environment. Why is NEXT FEST the right fit for LA, and vice versa?

John Cooper: In the last few years we’ve been actively looking for new ways to support independent artists throughout the year.  And because nearly half our staff lives in LA, we’ve been able to see firsthand how vibrant the cultural community is in LA right now. There seems to be a real, growing momentum behind creativity, which is right in line with what we’ve always done here at Sundance. It felt to us like the perfect time and place for an entirely new and different festival like NEXT FEST.

This is the second consecutive year that Sundance Institute is hosting a summer film festival in Los Angeles, but it feels like a new iteration. Why have you chosen to expand the program to include music?

John Cooper: Our Founder and President Robert Redford has always encouraged us to consider how different art forms inspire and influence each other, and there’s been recent growth in the crossover between film and music. That encouraged us to create public events that had film and music on equal footing. And when the new Theatre at Ace Hotel opened in January, with incredible space and facilities for both film screenings and musical performances, it all added up to NEXT FEST.

It’s a compact film program, culled exclusively from the 2014 Festival. What can audiences expect out of this program?

Trevor Groth: The six films we’re screening at the Theatre at Ace Hotel for NEXT FEST are all from our 2014 Festival and perfectly reflect the bold attitude that the NEXT <=> section of the Sundance Film Festival is known for. The films are pretty wide-ranging in terms of story and styles, but what stands out to me is how remarkable and unique each filmmaker’s vision is.

It’s also notable how stellar the acting performances are, including Aubrey Plaza’s hilarious turn as an ex-girlfriend who has returned from the dead in Life After Beth, John Boyega’s (who’s now acting in the next Star Wars film) breakout performance in Imperial Dreams, the bitingly funny Jason Schwartzman and Elisabeth Moss in Listen Up Philip , the mesmerizing Rinko Kikuchi in Kumiko the Treasure Hunter, and Dan Stevens from Downton Abbey fame as you’ve never seen him before in The Guest.

How do these musical performances complement the films that they are paired with? What went into those decisions?

Trevor Groth: In selecting the specific pairings, we looked for films and music acts that share a complementary artistic sensibility in terms of tone, personality, energy and style. We think those unique pairings in such a breathtaking theater will enhance the audience experience and create a new breed of festival.

Another important part of any film festival experience is the chance to engage with filmmakers and cast. What kind of conversations and/or Q&As are planned for NEXT FEST?

Trevor Groth: One of the best parts about the Sundance Film Festival are the Q&As where audiences hear directly from the filmmaker about the inspiration for and the creative process that went into making the film. We wanted to build on that idea for NEXT FEST, so three of our films will be followed by extended conversations between the filmmaker and a special guest. We’re designing these to be lively and fun and adventurous, and we’ll have more to share in the weeks ahead.

Napoleon Dynamite will kick off the weekend with an evening screening with Cinespia at the Hollywood Forever Cemetery. Why is this film such an important work in the Sundance canon?

John Cooper: Napoleon Dynamite is a film that we have a real connection to. We hosted its world premiere and consider it to be one of our big discoveries. With its 10th Anniversary this year and it fitting so perfectly into the NEXT ethos, it seemed like the perfect choice for our NEXT FEST kickoff. I think it’s a film that audiences in LA want to see again and again, and we’re going to try to get as many of the cast members there to talk about their experience with the film. Plus, I may try to learn the infamous Napoleon Dynamite dance for that screening, and would you really want to miss that?