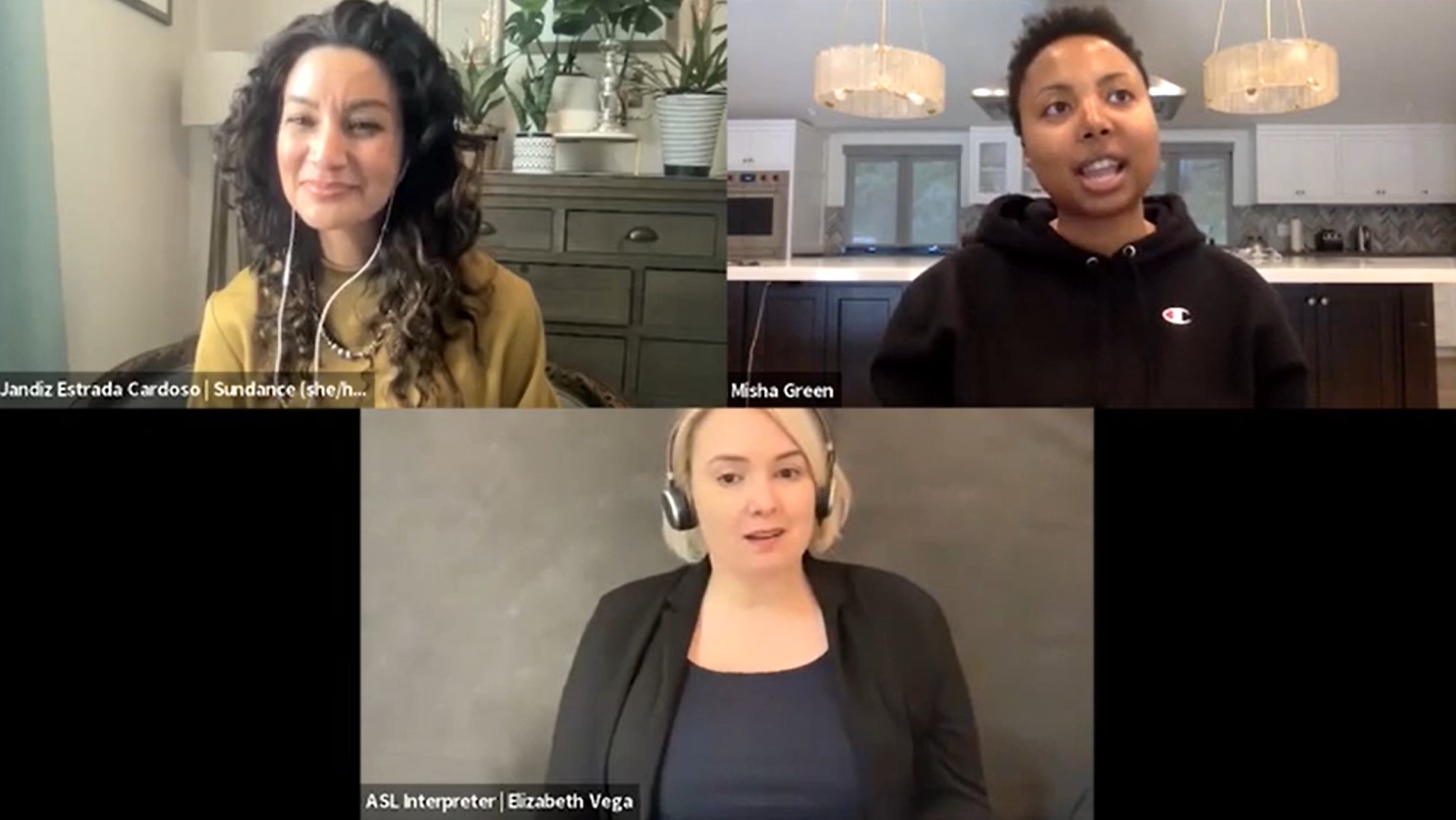 During Sundance Collab’s recent course on TV writing and development, Sundance Institute’s Jandiz Estrada-Cardoso asked director Misha Green to finish this sentence: “At the heart of every Misha Green show, you can always expect…”

“That’s what I think of when I’m reading, when I’m writing. I always think, ‘How can I surprise myself?’ And then hopefully that’ll surprise my audience. My hope is that you’re not coming to [my show] expecting to know what’s happening.”

The creator of Underground and Lovecraft Country sat down virtually with Estrada-Cardoso, Director of the Institute’s Episodic Program, during Sundance Collab’s online course: The Heart of Development with Misha Green. And throughout the webinar, Green talks about her own development process, her experiences with challenging TV executives, and tips for pitching your story.

Walking through the chaotic development process to get from idea to show, Green explains, “that’s part of the fun of Hollywood. It’s the wild, wild West. It’s like Olympic hoop-jumping. They’ll put a new hoop up or a new hurdle to jump over.”

Still, it’s important to include network executives as early on in your pitch as possible, according to the director. “I think that if you can pitch it, you should. Because a lot of people have ideas and if you want to get it made, you should try to involve them in the process as long as possible. People don’t like to have finished [scripts]. They like to be able to say that they worked on this too.”

Writers should then be prepared for anything, because any hoop you have to jump through is the next part of the development process. “Then you write it, and then you have to write more of it,” adds Green.

Looking back at her first show Underground, which she created alongside director Joe Pokaski, the decisions they made weren’t easy, but ultimately, those choices kept her story authentic and true to what she wanted it to be.

“Neither of us had run a show at that point and they wanted to bring on someone who had,” recalls Green. “But I said, ‘they’re not going to love [the show] as much as I will. I’m going to do all the work anyway.’ That was a great first step and a suggestion I would make. Fight to not have a showrunner because that person’s agenda is totally different than yours.”

Fighting for Underground was a big deal to Green. The show, available to stream on Hulu, tells the unflinching story of plantation slaves who band together for the fight of their lives — for their families, their future, and their freedom. She didn’t want people to be afraid of being afraid. “It was a story that scared people, and we wanted to make sure we never crossed that line of turning it into something it wasn’t ever supposed to be. It was a big fight to keep what needed to be on screen.”

Compromising with executives and creative collaborators would be a challenge at first. Green explains how the recommendations they made to her story would have drastically altered the show, but it was important to be able to meet in the middle. For example, in her original storyline, main characters Rosalie and Noah were on the run by the end of the pilot episode, but the network wanted them to stay on the plantation the whole first season. “Budget-wise, if you stay on one set, it’s so much easier to pay for that show,” she notes.

In the end, they altered the story to have the characters leave the plantation during episode three. And, ultimately, it worked out for the best. “That was a major shift in structure than what we had planned for the first season, but it didn’t alter or change the feel of it,” says Green. “I think them staying on the plantation for those two episodes gave us more time to settle with the characters before we got on the run. At the time, it was a major discussion we were having back and forth.”

Three years later, Green would go on to become the showrunner of her horror series produced by Jordan Peele, Lovecraft Country — based on Matt Ruff’s novel that follows a Korean war veteran as he journeys across 1950s Jim Crow America — and she’s sharing her experiences when it came to building a new dynamic with writers. “I tried something new [with Lovecraft Country]. I don’t assign episodes at the last second and I don’t tell them whose episodes are whose. I also brought in a lot of lower-level writers and writers of color.”

And while executives were bringing in long-time writers for HBO, Green also wanted to bring in fresh writers. And half of them ended up leaving -with network deals.

“That’s the thing I was trying to cultivate: the understanding of what it takes to be a showrunner. I look for people who are hungry, for people who are willing to move towards the scary part. And I don’t know if that’s the industry standard,” says Greene. “I think [networks] want someone to come in and fill up a space, so they can say, ‘we had a black girl in the room. We don’t really want you to challenge us.’ But that’s what excites me: people who come with their point of view and speak up and say, ‘this is how it should be.’

Sign up for Sundance Collab for free to watch a full recording of The Heart of Development with Misha Green and join the online course:  Master Class: Jumpstart Your TV Writing Career with Kelly Edwards

Two quick tips from Misha Green:
Put it on the page.
“When I first started writing, a lot of people told me I was overwriting these scripts, and I said ‘Yes, but I’m trying to do a different story.’ When you’re taking a subject like enslaved people’s narratives and trying to look at it from a different perspective, it’s hard for people to imagine and understand that. And that’s why I’m putting a lot on the page. I want to be clear on what’s being expressed because it might not be what you’re used to in this type of setting.”
Beat what’s on the page.
“If we can beat what’s on the page, it’ll be changed. But tell me exactly what you feel. If it’s a budget thing, then just say that. I’ll think of nine other ways to do it. But if it’s just because you’re afraid of where the story is going, if it’s just your fear, that’s not enough to stop it. That tells me to go harder. If we’re not beating what’s already on the page, we’re not doing it.”
Previous
Next