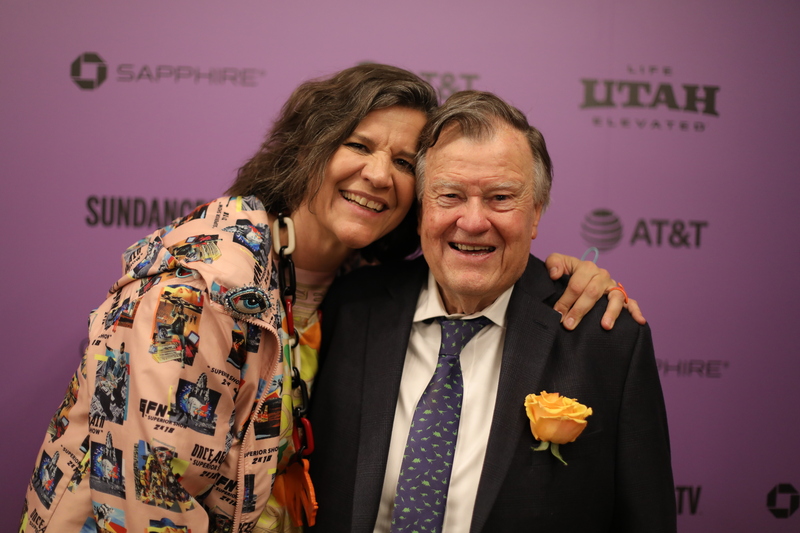 Director Kirsten Johnson and her father, Dick Johnson, attend the premiere of “Dick Johnson Is Dead” at the 2020 Sundance Film Festival.

A cinematographer may look “almost like a cyborg,” says Kirsten Johnson. But make no mistake. That person wielding a huge, sterile-looking camera is flesh and blood, with questions and doubts common to all humanity.

Take Johnson’s 2020 documentary Dick Johnson Is Dead ― which she directed and produced — where she and her father plumbed the depths of human experience by telling the story of Dick Johnson and family facing a diagnosis of dementia.

“Is it OK that I made a film with my father while he had dementia?” she asks in a master class for cinematographers, The Moving Image As a Relationship, presented by Sundance Collab. When she asked herself, the answer was always different. Sometimes it was: No. Sometimes: Yes… Maybe… Of course not… I don’t know.

Johnson had asked her father in the early stages of his memory loss if she could make a film, and he said yes. He good-naturedly participated, as his daughter staged various methods of his death and dying, even putting him, laughing, into a coffin at one point. Lying at the bottom of a stairway, leg twisted unnaturally, his daughter coached: “Can you put one arm against the wall?… Yeah, that’s nice.”

At that moment, she remembers now, she felt a sense of shame. How ridiculous this was! She was filming her father dying, then bringing him to life again for another scene, over and over again. She was trying to time travel.

She bore the burden of keeping him physically safe during shooting, as well as the responsibility for the image he would leave in the world. In no way did she want to humiliate him. She was injecting comedy into sadness, in fact embracing the comedy in sadness. Her father always liked a good laugh, and, as a psychiatrist, he understood psychological complexities. “I needed humor, and my father needed humor,” she explains now.

“I knew dementia was going to take us all to unexpected places,” she says, because her mother died of Alzheimer’s in 2007 after living with the disease for seven years. Johnson knew her father’s death was inevitable.

“We are making a film with my father in order that he might live forever,” she elaborates, so that she could hold onto him. “I didn’t want him to die.”

In the end, “Acknowledging my own impotency was deeply meaningful to me,” says the daughter who makes her living behind the camera. Other people have told her they found comfort in the film, and that meant a lot to her as well.

The documentary played the 2020 Sundance Film Festival, where it won a Special Jury Award for Innovation in Nonfiction Storytelling. It won several other awards and was shortlisted for an Oscar.

But Dick Johnson Is Dead is not the only time Johnson brought questions of humanity to documentary filmmaking. The 2016 Cameraperson, which she shot and directed, explores the personally affecting situations she’s filmed over the years as a cinematographer on such important and award-winning documentaries as Citizenfour and Fahrenheit 9/11, and maybe 50 docs in all.

“I am not saying film is brain surgery, but I am saying it demands a lot.”

Johnson recalls filming an interview with the parents of 17-year-old Jordan Davis, who died in a shooting in November 2012 at a gas station in Jacksonville, Florida, by a man who confronted Davis and three friends for playing their car radio too loud. The man shot into the car, wounding Davis fatally.

As she filmed the intense interview, Johnson noticed the mother repeatedly smoothing and also repeatedly folding a napkin out of the view of the director. Her movements alarmed Johnson, who asked her, “Do you need a break?” The mother immediately replied, “Yes,” and ran to the bathroom. Although the director objected that only the director, not a cinematographer, could stop filming, Johnson knew that trust was more important in the “long game.” Years later, the mother thanked Johnson for turning off the camera.

A cinematographer faces dilemmas like that on a daily basis.

Filming a Golden Gloves boxing tournament, Johnson was stationed in a hallway between the ring and the locker room. As she backstepped quickly, camera rolling, she had to decide: Do I follow the angry boxer coming my direction — who stalked out of the ring, cursing and punching things when his opponent was announced as the winner — beyond the locker room hallway and into the bathroom?

Or: Do I film a huge surveillance blimp in the Afghan sky when people tell me I can’t because it’s classified?

In Johnson’s case, the first answer was no, and the second answer was yes. (“Seriously, I cannot film the sky?,” she reasoned.) Johnson wants to tell stories that advance justice, that enlighten, that accomplish good in the world. But also: “I want to be respectful of others,” she says.

Try to make meaningful work, try to find a process that is respectful to other people.”

One such dilemma made her see herself as never before: a human being trying to do the right thing, who wants to end injustice, who sometimes makes mistakes, and always asks a great deal of herself. Slow down and seek balance, she encourages other cinematographers, “and learn how to be in the present, in your body, disconnected from images.”

“Think about the fact that your time is limited on this planet. We’re all going to die, we all have that in common,” she advises other filmmakers. “This planet’s future, we don’t know what it looks like. Try to make meaningful work, try to find a process that is respectful to other people. Try to accept your own limitations. Be kind to yourself, and try to make movies that blow us all away, and change our lives, save us, and inspire us.”