From the Archives: Director Kelly Reichardt on ‘Meek’s Cutoff’ 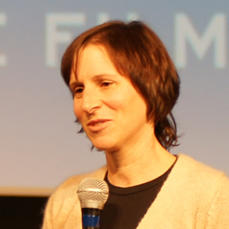 The opening to director Kelly Reichardt’s film Meek’s Cutoff sets a grim scene—a group of pioneers arduously carries their belongings across a river, while a man carves a message into the bark of a dead tree: “LOST.” Meek’s Cutoff is based on the true story of the pioneer group led by Stephen Meeks, a guide who promised to lead them through a shortcut on the Oregon Trail in 1845.

A Sundance Film Festival veteran, Reichardt (River of Grass, Old Joy) applies quiet atmospheric shots of the barren plains to illustrate the loneliness and fear of the pioneers (played by Michelle Williams and Bruce Greenwood). Reichardt and screenwriter Jon Raymond answered questions from the audience at the film’s premiere at the Egyptian Theatre on Friday.

What prompted you to tell this story?

Raymond: One of the stranger jobs I’ve had was naming a golf course in Bend, Oregon. So it caused me to do some research into the history out there. I ended up with some of the historical kind of stuff, and I came across the story of Meek’s Cutoff, which is one of the most famous episodes of the Oregon Trail.

What prompted you to do a cliffhanger-type ending instead of resolving it?

Reichardt: I was just interested in a little moment in their journey. For me it was a little more interesting to end with a question. Because we all sort of know how it really ends: they’re going to end up naming a golf course—and I like a cliffhanger.

Raymond: So much of the movie is about people making decisions without enough information. There are certain leaps of faith these characters have to be making one way or another in order to kind of resolve every problem. And this kind of open ending maintained that sort of theme that there’s this certain unknowable element at the center of the story that allows the drama to happen.

I noticed that the women in this film are portrayed in a much stronger light than most historic movies. I was wondering if that was historically accurate.

Reichardt: I don’t think it’s accurate—it’s just different. Most of these stories are told from a male perspective, and we were interested in telling the story through the eyeball of the women. What would John Wayne’s character look like from the woman that served his soup?

What attracted you about shooting in this classic aspect of ratio?

Reichardt: When you’re in the desert, you see for 40 miles in every direction; it’s very hard to be taken aback by something. And if they’re traveling this 10 miles a day, in the wide screen we could see that “Well, there’s tomorrow and there’s yesterday,” so the square really helped keep me in the moment with them.

The pregnant woman just really intrigued me. I was afraid she was going to have that baby. Was that something that you did on purpose?

Reichardt: Reading all these diaries, some of them, you feel like you really know someone, and then a woman will say, “A new person joined us yesterday,” and then you realize someone had a baby. And it was happening all the time. Being pregnant wasn’t a reason not to go. But they also didn’t talk about pregnancy.

So it’s just not really talked about, but all of a sudden there’s a new little one and you’re like, “You just walked 20 miles and then you had a baby probably under your carriage. But it’s not really worth mentioning.” To me it was another part of the story that was not much talked about, just how it was for the women going through it.